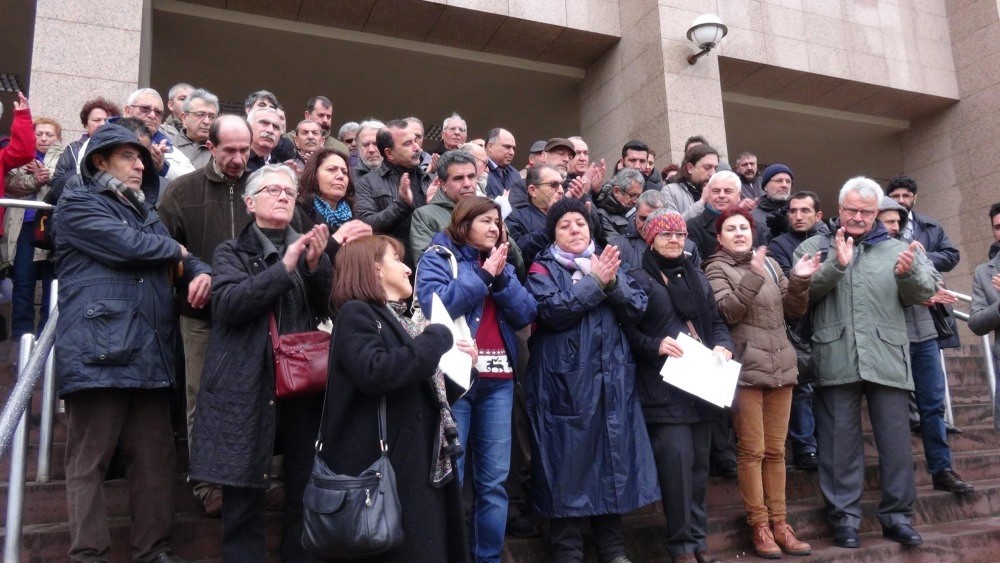 A local group in the western city of u0130zmir supporting Academics for Peace in a demonstration after signing the petition calling for an end to the attacks in the southeast of Turkey.
by Jane Louise Kandur Dec 07, 2016 12:00 am

The Campaign for the Public University published an article on Nov. 26, 2016. The article, which is written anonymously, contains accurate figures. However, as any academic is aware, figures without context, without an accurate reading of the overall situation, are misleading and create an understanding that is not based on reality

The article addresses what it refers to as the "criminalization" of the academics who signed a petition (known as Academics for Peace). On the face of it, signing a petition to ask for "military operations" in the "Kurdish region" to cease, sounds terribly innocent. However, when the facts of the situation are examined in the cold light of day, it is clear that there is a serious case to be answered by the 1,128 signatories of Academics for Peace.First of all, the statement that the Academics for Peace signed the petition to ask the Turkish government to cease "military action" in the "Kurdish region" of Turkey is a misrepresentation of the reality. There is no Kurdish region in Turkey. There is the southeastern region of Turkey where a large number of Turkish citizens of Kurdish descent live. But certain regions of Istanbul also have a similar proportion of Turkish citizens who are of Kurdish descent. Yet no one would call these regions "Kurdish regions."

The PKK, an internationally recognized terrorist organization, is active in the southeast of Turkey. The PKK, which represents only a minority of Turkish citizens of Kurdish descent, is listed as a terrorist organization by the United States and many European countries. The PKK is responsible for a large number of terrorist attacks, many that target police stations, primary schools and even hospitals. Turkish police and some military units have stood against the terrorists, trying to bring peace to the region. To a large extent these efforts have been successful, resulting in fewer and less deadly attacks being able to be carried out by the PKK.

However, at the height of this campaign, in January of this year, the Academics for Peace released a statement demanding that the Turkish state stops its struggle to bring peace to the region; they demanded that the Turkish state lay down its arms and let the terrorists continue their atrocities. In any country this would be tantamount to treason.

Academics have a role to play in any society; it is important that they hold governments and other organizations accountable. But when they take up a stance against the government in favor of terrorism it is not only unconscionable, it is incomprehensible. 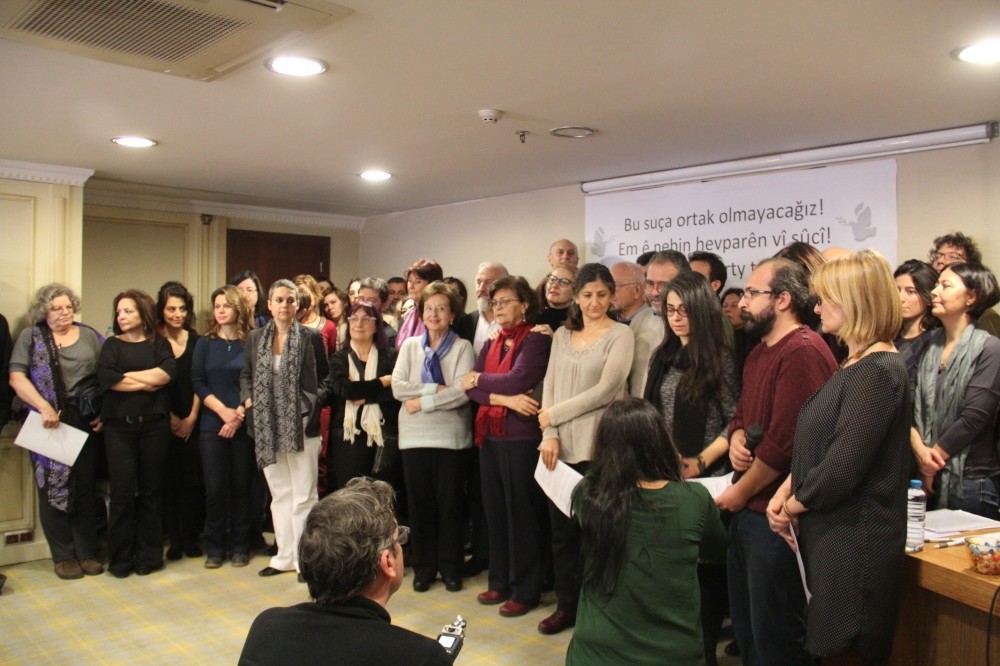 Some of the members of Academics for Peace gathered at a press meeting.

Moreover, the word "criminalized" used in text is purposefully vague, so vague as to be rendered meaningless, yet still powerful enough to create negativity. None of these academics have been arrested for signing the petition. Some have been dismissed from their posts, but not solely on grounds of the petition; that is, those dismissed were found to have committed other misdemeanors.

Some 34,000 civil servants have been arrested, because there is a case to answer. They have been found guilty of supporting one of the three terrorist organizations active in Turkey – Daesh, the PKK or the Gülenists – against the elected government and the Turkish state.

Interestingly enough, the article does not mention the thousands who have been found to be innocent of any involvement in FETÖ and have been reinstated in their jobs with full pay.

Another thing that is glossed over in the article is the fact that FETÖ has worked for over 40 years to infiltrate the judiciary, police, military, bureaucracy and academia. The group was wise enough to know that it had to try to win the public mind as well as seize the means of power. However, FETÖ failed to capture the majority of the Turkish public mind (one need only look at the approval ratings for the state of emergency measures to understand the overwhelming distrust of Gülen and FETÖ in Turkey). FETÖ did not put all its eggs in one basket, and understanding long ago that those who knew them best, that is the Turks, would never fully trust them, they turned to the West and worked on creating a perception there that is far from the reality.

The statement that 64 students who receive the Scientific and Technological Research Council of Turkey (TÜBİTAK) grants have been denied their bursaries needs to be addressed. TÜBİTAK supports around 25,000 students. Of these 64 lost have their bursary. It must be remembered that the Gülen Terror Group starts to attract members as early as middle school or high school. Thus, it should come as no surprise that some post-graduate students have been found to be involved in the movement. Indeed, many FETÖ members were active in TÜBİTAK, which is one of the most important Turkish scientific think tanks. All students who received grants from TÜBİTAK had their grants stopped while investigations were carried out. More than 24,000 students managed without their grants without complaint. These students realized how important it was to identify those people who support FETÖ or the PKK or Daesh, intellectually, financially or physically. Now all but 64 grants have been reinstated.

Not only do those who support terrorism, intellectually, financially or physically in Turkey hide behind a veneer of studentship, they also use other careers to hide their activities. Many are the "journalists" who have never published an article, but the minute they are arrested for supporting terrorism, these same individuals call foul in the name of freedom of speech. This is a calculated move; it is well understood how the call for "freedom of speech/freedom of press" resonates with the West. The same is true for judges, police officers, military officers and academics. FETÖ not only established a network that infiltrated deep into the Turkish state, they ensured that all the important bases were covered. Weapons and power on their own are not enough to seize control of a country; FETÖ well understood that one must also capture people's minds.

The statement that 15 private universities have been closed down is accurate. Yet every single one of these institutions helped to educate new members for the FETÖ. More importantly, every single one of these institutions financed terrorism, both FETÖ, and as recent evidence is suggesting, the PKK. That is, these universities financed the destruction of the Turkish infrastructure and the death of many Turkish civilians. Naturally, the only reasonable response by a state is to close such institutions down. All Turkish citizens were aware after 2014 that FETÖ was trying to bring down the democratically elected Turkish government. All Turkish citizens made their choices at this time and many journalists and academics left their institutions in solidarity with the Turkish state. Those who remained up until the date of the failed coup need to answer why they remained. If their answer is one of economic necessity, this is taken into consideration. Many academics and journalists, able to prove that they were not complicit in the 15 July failed coup, have been employed by other institutions.

The matter of the election of rectors is one that is long overdue. Formally, when the rector was elected by the members of the university, academics would spend at least 18 months campaigning. The university would often be divided along political lines and academic pursuits would be laid to one side. When Western commentators try to understand Turkish academia, they should not do so on the basis of Western academia. Turkish academia has always been a hotbed of political rivalry.

The hyperbolic statement that now the president will appoint the rector is a gross oversimplification. One need only examine the earlier system to understand this; formerly, the university would hold an election to come up with a short list of between three and six candidates. This list would be submitted to the Higher Education Council and the council would make a short list of three. This short list would then be submitted to the president, who would make the final appointment. In many countries, including the U.S., a board receives applications for post of university president and then makes the appointment. In Turkey, the Higher Education Council will now make a short list of the three most eligible candidates, and the president will choose one. That is, the only change is that the elections in the university have been eliminated, thus allowing academics to focus on academic studies, not on politics.

There has been no criminalization of academia or academics in Turkey. What has happened is that there is an attempt to stop terrorist organizations abusing academia to serve their own nefarious ends. When academia supports terrorism – financially, intellectually or physically – this is unacceptable, be it in Turkey or any country anywhere in the world. And when the terrorist organizations are those that do not hesitate to target civilians, hospitals or schools, when they are organizations and groups like Daesh, the PKK or FETÖ, then one must seriously consider what business academics have in supporting these organizations.
RELATED TOPICS