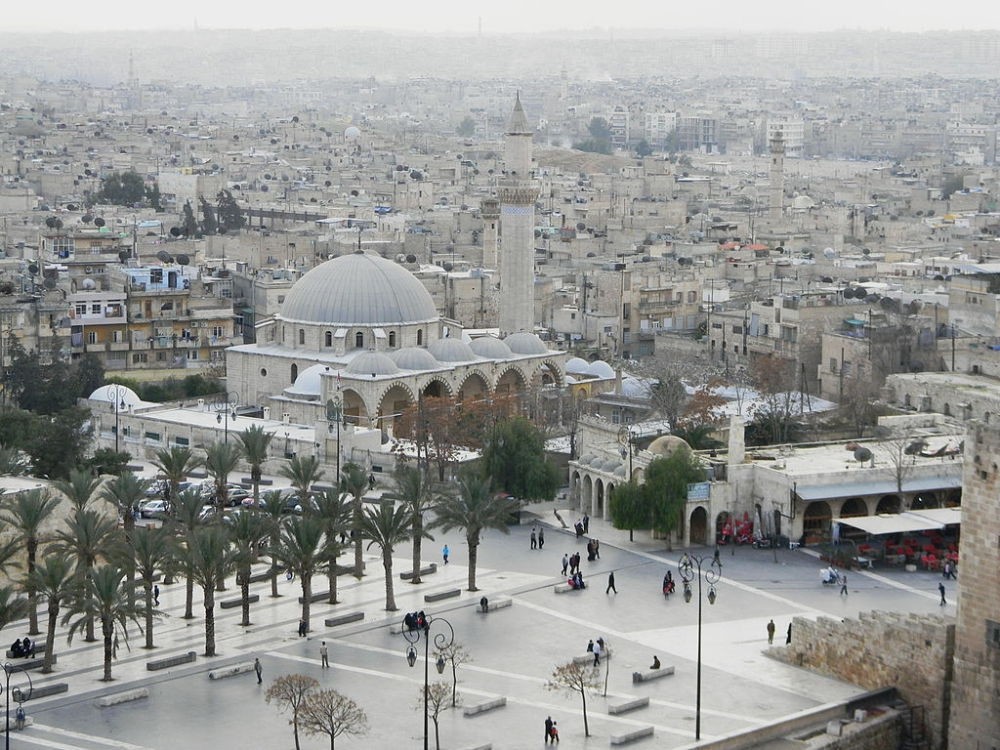 The Khusruwiyah Mosque in Aleppo before the war. The mosque was designed by Ottoman court architect Mimar Sinan and destroyed in 2014.
by Ekrem Buğra Ekinci Dec 23, 2016 12:00 am

Damage to Syria's cultural heritage has been widely reported since the outbreak of the war. With UNESCO World Heritage sites, Aleppo has lost its great architectural beauty, some of which had been built by court architect Mimar Sinan during the Ottoman period

The old ID documents of most elderly Turkish citizens living in the cities of Gaziantep, Kilis, Şanlıurfa and Kahramanmaraş show their birth place as Aleppo because these cities located in modern-day Turkey were a part of the governorate of Aleppo before 1918.

Sixty-six kilometers from the Turkish border, Aleppo was separated from the Ottoman Empire following the French occupation during World War I. However, it was not enough for the people of Aleppo to break relations with the Ottomans. The city of Aleppo has always remained in the hearts of people and lived in words and poems after 1918. The scholars, bureaucrats and soldiers from Aleppo continue to take duties in Anatolia and Rumelia. Ottoman Sultan Suleiman the Magnificent spent a winter in Aleppo on his way from his Baghdad Campaign in the 16th century. A local bard, Aşık Garip, wandered around Aleppo and his poems reflect his devotion to the city.

A wealthy city in Syria

Aleppo is one of the oldest cities on earth. The city is believed to have been founded by Halab bin Mihr, the King of Amalek. According to the legend, the city was called "Halab al-Shahba" as Prophet Abraham milked his "shahba" (white cow) here and distributed it to the poor. "Halab" (Aleppo) means milk in Semitic languages. The milk white stones of the city are in harmony with its name.

The city was conquered during the time of Caliph Abu Bakr and since then it has been ruled by Muslims. The heyday of the city was during Ottoman rule, which began in 1516. A UNESCO world heritage site, Aleppo, which was reconstructed with mosques, madrasahs and inns, became very wealthy thanks to flourishing trade. With the production and trade of cotton, silk and olive oil products and jewelry handcrafts, Aleppo rose as the heart of the Middle East.

The city was the most popular market for the merchants from Anatolia, Arabia and Iran. Aleppo was in a way the only market in the Middle East, especially before the Portuguese opened the route to India. Everything and everybody first traveled to the Harbor of İskenderun on ferries and then arrived at Aleppo which was 135 kilometers from İskenderun. The city became a lively place with the arrival of the telegram and railways and the construction of schools and a mint. Various countries opened consulates in Aleppo. Before the civil war, Aleppo was the wealthiest city in Syria.

Aleppo was a cosmopolitan city like other trade cities around the world. In 1890, four-fifths of the city's 125,000-people population were Arab-, Turkish- and Kurdish-descendant Muslims while the rest were Christians from different sects. Almost everybody could speak Ottoman Turkish. There was a total of 260 schools, 120 inns and 72 public baths.

However, the Grand Mosque is the structure that gave the city its characteristics. The mosque was built by Umayyad Caliph Sulayman ibn Abd al-Malik. Although the Grand Mosque is not a match for the Umayyad Mosque built in Damascus by the brother of Sulayman ibn Abd al-Malik, it is still a magnificent structure. As it is home to the tomb of Zechariah, the mosque is also known as the Zechariah Mosque. Although the Grand Mosque was destroyed during the Crusades and the Mongol invasion, it was restored by Nur ad-Din, the governor of Aleppo during the Seljuk Empire. Argouniya Hospital, which has stood tall until today, was a mental home where modern medicinal methods were applied.

There was a fortified castle in the middle of the city that even Tamerlane was not able to capture. There were two or three-floored old Aleppo houses around the citadel where the people of Aleppo used to live inside the outer walls that were destroyed. When you went inside these houses, which looked worn and gloomy from the outside, it felt like a breeze from heaven with smells of jasmine and lemon and decorated gardens. The interiors of these houses were reminiscent of palaces with gilded wall ornaments on marble and fancy furniture. Bay windows and terraces brought freshness to the house. The houses featured no windows to the streets; and even if they did, they were covered with shutters. The people of Aleppo preferred to live their lives away from prying eyes but in comfort. The lives of the people in Aleppo went on in peace and joy as they took a sip from their coffee and smoked their hookah poolside.

These old houses of Aleppo were connected to each other via tunnels in case of siege. However, most of these tunnels have either collapsed or closed down over time. After the Hejaz Railway reached the city of Aleppo, new neighborhoods such as Aziziyya, Camiliyya and Tilaal were born outside the city walls.

In Aleppo, the climate is warm in winter and hot in summer. Water scarcity wasn't irregular in the past as the nearby Queiq River used to have a period of drought. Back in the day, people met their water needs via cisterns and wells. Aleppo was established on a flat terrain. The streets had sidewalks and they were mostly covered due to the excessive heat. There were gardens surrounding the city and huge pistachio trees whose fruits were bigger than the pistachios that originated from the Gaziantep province of Turkey. Moreover, the city, which has a holy identity, hosted the tombs of Prophet Abraham, Elias, Zechariah and Shemun. 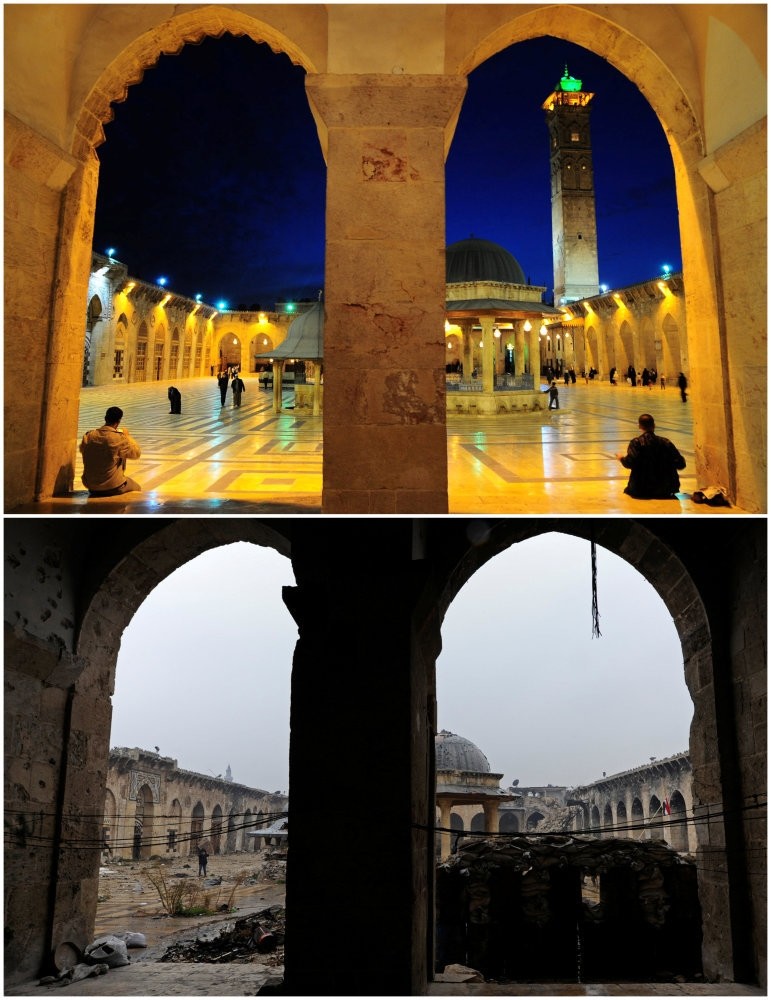 Children would breakout with an abscess that remained on their faces for an entire year. Once it healed, it left a scar as big as a coin. This mark was called "Habbah al-Halab" (The abscess of Aleppo).

Due to its economic power, Aleppo had always been a place where a strong opposition existed. Even under the Ottoman rule, the people of Aleppo had an oppositional stance. Newly appointed Ottoman viziers had a hard time imposing their authorities. The first resistance to the French occupation in 1918 was born in Aleppo. Aleppo was also place where the first protests against the Assad regime took place. Hence, Aleppo has been suffering the most from the pains of the Civil War. There is no sign of the rich history of Aleppo now, which was reminiscent of an open-air museum.

Most of the historic buildings including the Umayyad Mosque have been damaged with the ongoing bombings while some of them have been completely destroyed. The Aleppo Houses, the mirrors of the city's social history, have turned into wreckage. Aleppo, which lost most of its population during airstrikes, is not only a city in ruins but also a deserted city, as the remaining population is evacuating the city. Apart from its historic position, the city has almost lost all of its economic importance as well.
RELATED TOPICS