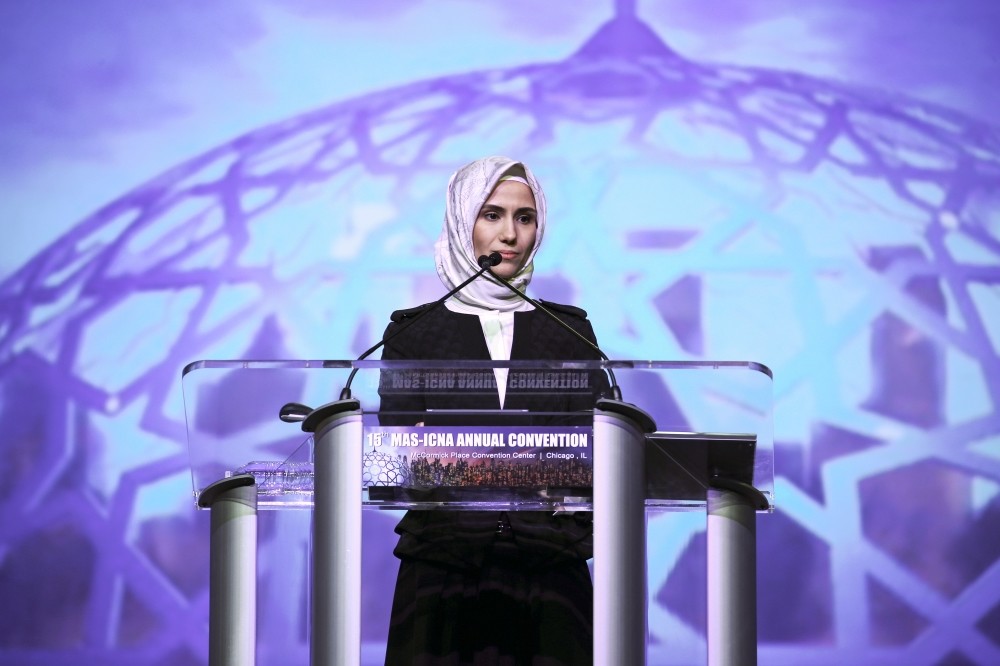 Last Monday, Tuesday and Wednesday saw a large number of Muslims flock to the McCormick Center in Chicago. American citizens who can trace their ancestry from Palestine, Iraq, Syria, Yemen, Somalia, Turkey, Lebanon, Europe and many other nations came together to spend three days contemplating the civic duties and responsibilities of Muslims in America today

The MAS-ICNA convention met for the 15th this year. The theme was Islamic Duties and Civic Responsibility. Approximately 15,000 Muslims (some reported as many as 19,000) met to listen to lectures from renowned scholars like Jonathon Brown, Suhaib Webb, Linda Sarsour, Dalia Mogahed, Nouman Ali Khan and many others. There were programs and entertainment for children. In fact, the entertainment, ranging from bouncy castles to mechanical horses and/or dogs, face painting, challenges and races made me wish I was an 8 or 9-year old, or at least that I had one in tow.

The young people were also catered to, with talks specifically addressing their needs and interests. In addition to discussing spiritual issues, the speakers addressed the role of young Muslim in today's American society. Nouman Ali Khan addressed the youth, stating that this generation has a grave duty to fulfill: "This generation is going to have to stand tall. And you are going to bring credibility and you're going to bring honesty, not just within the Muslim community, but outside the Muslim community too. You're going to be the ones. If you do that for the benefit of all of humanity, then you're on some ground where you can say this was inspired by my deen." After seeing the young people there, after talking with some of them and experiencing their eagerness, their dedication, their willingness to learn, one can only have confidence that they will succeed. 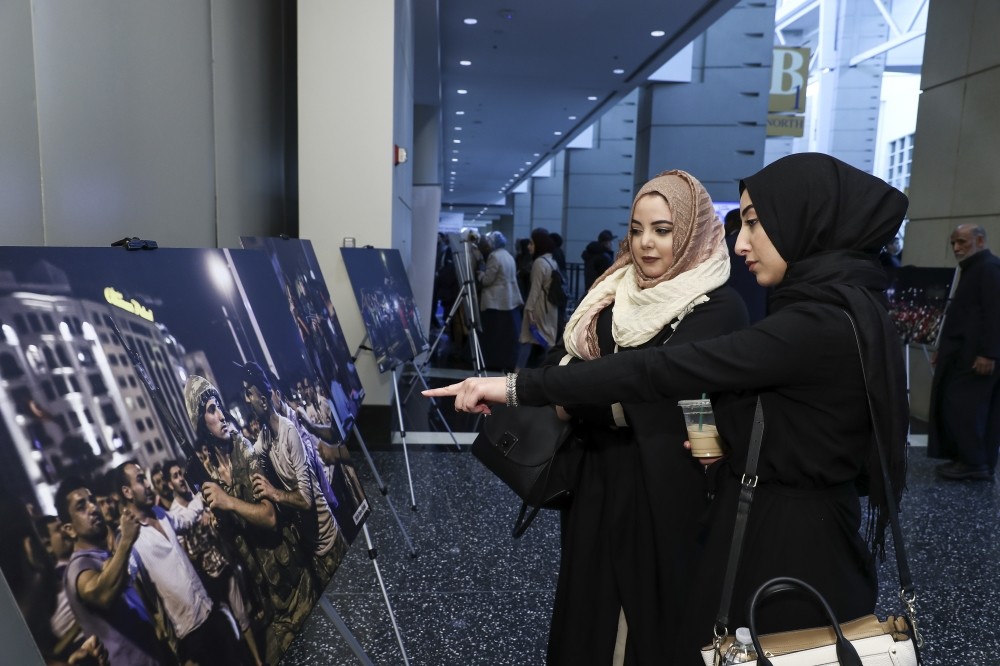 Two visitors at the Anadolu Agency's photo exhibition on July 15 coup attempt at the convention venue.

Dalia Moghaed addressed the crowds and said, "Due to the urgency, we will finally get done what we should have been doing all along. And I believe, I believe with all of my heart, we can do this."

Linda Sarsour inspired the crowds with her direct and down to earth talk: "I want you to tell your children to hold their backs straight," she said, "and to keep their heads held high and to make sure that their faith is stronger than ever so when they walk out into these streets they are unapologetically Muslim." The phrase "unapologetically Muslim," seems to sum up the message being given at MAS ICNA, to encapsulate the theme of "civic duties." When one is unapologetically Muslim this entails knowing one's religion well, representing it correctly and being proud of what one represents. Above are just a few examples of the many inspiring talks and conferences held over the three days. But the talk that packed the room to the rafters was that given by Sümeyye Erdoğan Bayraktar. Mrs. Bayraktar actually gave two talks, a smaller one in the morning of the first day. Buther talk in the evening of the same day was the one that drew in the crowds. (Details of this can be found in the report by Mr. İlnur Çevik)

Upon Mrs. Bayraktar's arrival at the hotel, which was supposed to be unannounced and discreet, she was greeted by a crowd of nearly 200 people. They were waving Turkish flags and had bouquets of flowers to give her. They were cheering wildly. And the vast majority were not Turkish. These people were American Muslims whose families had come from Palestine, Syria, Iraq and Somalia. They were there to welcome a person whom they perceived to be representing their hero, Turkey.

Mrs. Bayraktar talked about what had happened in Turkey and what is happening today. The crowd lamented with her, cheered with her and applauded wildly. Mrs. Bayraktar was eloquent and to the point. Turkey has had a long journey through incredible oppression and unfair practices, through marginalization of the majority, through the skimming off of resources, to reach where it is today. Although the coup was terrifying and dreadful and the aftermath is, to say the least, complicated, democracy and justice rules in Turkey. Mrs. Bayraktar told the 7,000 plus audience: "As American Muslims you live in a country founded on principles of religious freedom. While occasionally America may stray from these founding principles, Inshallah it will continue to honor these principles for all of its citizens."

Everyone I met through these three days was full of praise and admiration for Turkey. They stated how astonished they had been by the Turkish people's reaction in the face of the coup, how they admired the courage it took to stand their ground. And all made the same request: "Please continue to stand strong. We are behind you."

A book of blank pages had been brought from Turkey. The intention was that people could write messages to the president here. By the end of the three days the book was no longer empty, pages and pages of messages had been written. These letters are a good reflection of the sentiments expressed above. I would like to give a few examples here.

An individual from Egypt wrote:

"Watching the coup unfold in our beloved Turkey was like watching someone cut off a piece of our body and trying to destroy it."

Another individual wrote: "When the revolution defeated the coup attempt on July 15th my local community celebrated with sweets."

Another wrote: "When we heard that Turkey is...in this event we came along way from Paris ...Victory to Turkey...Victory to the Tunisian people."

And then a message from a Syrian Muslim:

"Turkey is the only hope for us after Allah. I pray to Allah to protect this country... Finally, I would like to say that it is my country as well and I will do what I can to serve it."

A message from Chicago was:

"Was awake the whole night, just like any Turkish citizen, from Syria, United States. We believe in the democracy and the choice of the people. Love and respect."

Another message was addressed to Mrs. Bayraktar:

An attendee from Dallas wrote:

"We as Muslims are proud of Turkish President Brother Erdogan. Please keep leading the Muslim Ummah in the right direction."

"We appreciate and love your support. There is no nation in the WORLD as outspoken as Turkey and its people on the Palestinian cause. We love you"

You are the only one in our present history or the only leader that stands for justice."

And finally a message from a younger attendee:

"I am from Somalia. I am a little girl. I have heard of you. We support Turkish and you. Thank you for what you have done and keep up the good work."

When one reads these letters it becomes clear exactly what the people were cheering when they listed to Mrs. Bayraktar. The one thing that most of the attendees had in common was that they themselves or their parents had originally come from a country that is being torn apart by a war not of their own making. Stronger nations are seeking advantages in the Middle East, and creating the extensive turmoil in the region. Yet Turkey is still standing. Despite everything, Turkey has managed to stand strong. It is able to do so thanks to prayers like those above. May Allah bless and have mercy on all the people all over the world who prayed for Turkey and its people on the night of 15 July and who continue to pray for Turkey and its people. Never, never doubt the power of prayer.
Last Update: Jan 03, 2017 8:52 am
RELATED TOPICS