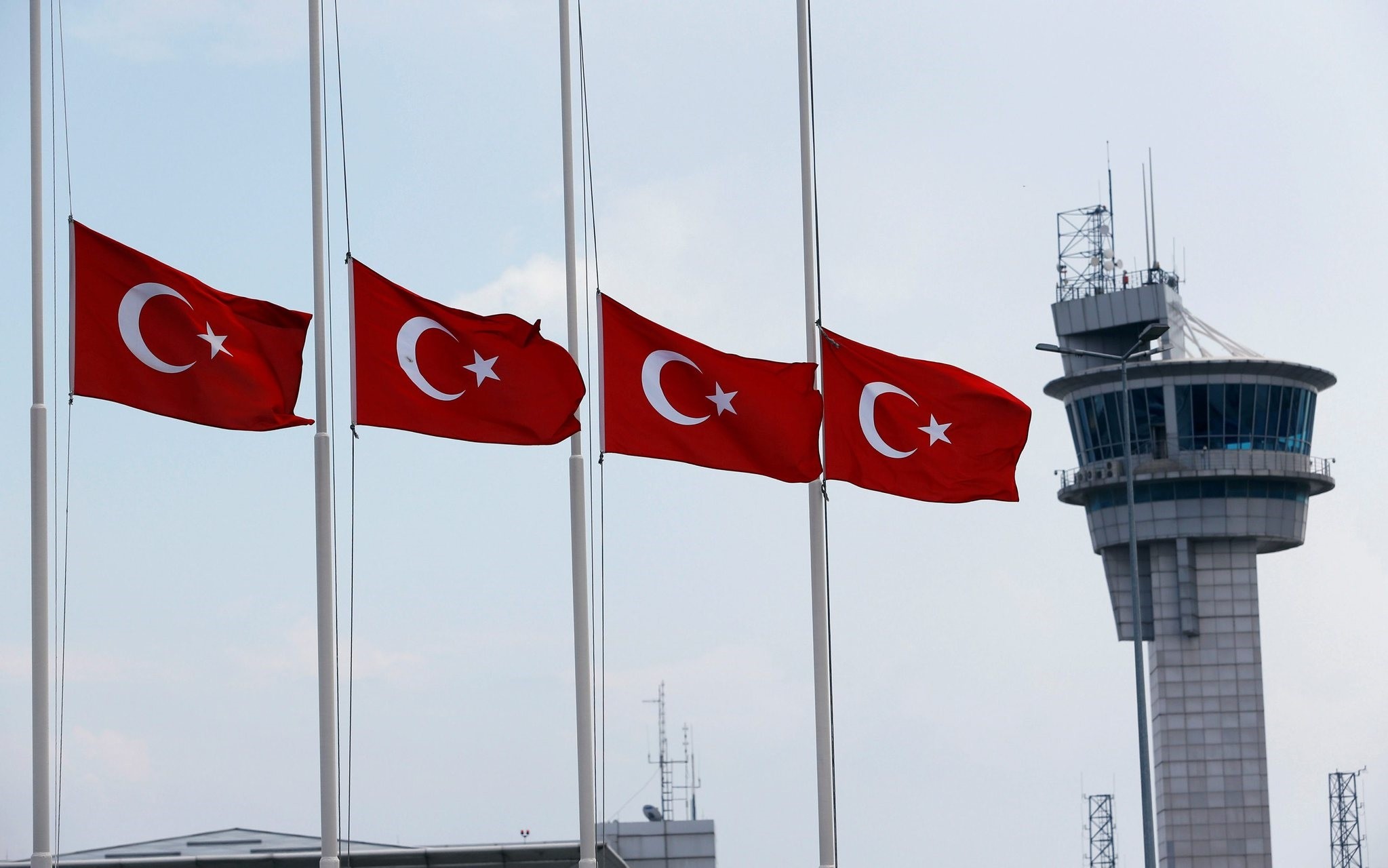 Turkish flags, with the control tower in the background, fly at half mast at the country's largest airport, Istanbul Atatu00fcrk, following the June attack there. (Reuters Photo)
by Jane Louise Kandur Jan 07, 2017 12:00 am

Early in the hours of the new year a lone gunman, highly trained and ruthless, attacked an Istanbul nightclub. Thirty-nine people lost their lives and 71 people were injured. Out of respect for the death of these innocent civilians NATO lowered its flags to half-mast

NATO has lowered its flags in response to the attack on the Istanbul nightclub, Reina, on New Year's Eve. Why is NATO flying the flags of its member nations at half-mast?According to NATO's home page: "All flags outside NATO headquarters in Brussels are at half-mast today in solidarity with Turkey after the terrorist attack in Istanbul during the New Year's celebrations." That is, the flags are flown at half-mast to show respect for the people who died in the terrorist attack. Flying flags at half-mast is an indication of communal or shared mourning.

But why half-mast? Where did this tradition come from and what does it indicate?

No one really seems to know when this tradition started, but according to one Captain Kent, in his book Signal, the first recorded reference dates to the early 17th century. The captain of the British ship Heart's Ease, William Hall, was murdered by Eskimos while the crew was searching for the North-West Passage. When the ship returned to London, the flag of the Heart's Ease was trailing over the stern, as a mark of mourning. It was also traditional for Royal Navy ships to fly their flags at half-mast on the anniversary of King Charles I's execution (Jan. 30 1649). It is this naval history that has led to the term "half-mast." Many reasons are given why the flag is lowered on board a ship, one being that the navy is known for its order and regulations. Thus, when the flag is lowered, it creates a disheveled state, implying mourning. Another reason that is given is that room is being left for an "invisible" black flag of mourning.

Whatever the history of this tradition may be, it is a tradition that exists in almost every country in the world today. Some countries which never lower their flags to half-mast include Saudi Arabia, as the flag includes the Shahada. Other flags that are never lowered are those of Iran and Iraq, which include the Takbir, and the flag of Afghanistan, which includes both the Shahada and the Takbir. As the Takbir and the Shahadah indicate the oneness of God, any flag that contains them cannot be lowered to half-mast.

Some instances of recent events when the national flag (and sometimes the flags of other nations) were flown at half-mast are as follows.

After the death of Princess Diana in 1997 there was outrage in the United Kingdom that the flag flying from Buckingham Palace was not lowered to half-mast. This was not because the Queen refused to honor the Princess; the matter was a bit more complicated. The flag flown from Buckingham Palace is the Royal Standard, and as this flag represents the Monarchy, by tradition it is never flown at half-mast. The Monarchy is continuous. However, on this occasion, in response to public demand, the Union Flag replaced the Royal Standard, and the former was duly lowered to half-mast. After this date, the Union Flag is flown from Buckingham Palace when the Queen is not in residence, and it has been lowered to half-mast on the deaths of Princess Margaret and the Queen Mother.

In Canada, the Canadian flag was flown at half-mast on September 11, 2001, after the tsunami in 2004, on the death of Pope John Paul II and in response to the 2005 London bombings.

After the loss of the Malaysia Airlines Flight 17, Malaysia and Holland flew their national flags at half-mast.

When Daesh terrorists attacked Atatürk Airport in June 2016, several countries lowered their flags to half-mast. All the flags of NATO member countries were flown at ha

lf-mast at the NATO headquarters in Brussels.

NATO headquarters also lowered all the national flags in response to the terrorist attack in Nice when a truck was driven into crowds celebrating Bastille Day. Eighty-six people were killed, and 434 injured in this attack.

NATO headquarters also lowered their flags at half-mast to show sympathy and solidarity for Turkey after the terrorist attack on the Reina nightclub on New Year's this year.In addition to this, symbolic monuments, for example, the Brandenburg Gate, were lit up in the colors of the Turkish flag. All of these actions were welcomed by the Turkish people and government.

From the above, it can be understood that the lowering of flags to half-mast has become a common response to terrorist attacks. This is a wonderful display of international solidarity and support.

But when examining the events which led NATO to lowering its flags to half-mast, to monuments being lit up in the colors of national flags, one question springs to mind.

Is it because the perpetrators of these attacks were not Daesh, but were FETÖ or the PKK? That is, the perpetrators were not ones who threatened Europe, but who rather specifically targeted Turkey? One would hope that institutions like NATO do not differentiate between terrorist organizations.

The question is out there. Unfortunately, there doesn't seem to be anyone willing to give a reasonable answer.
RELATED TOPICS