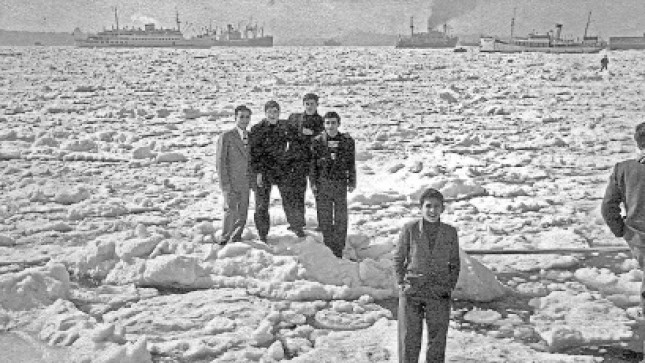 Winter has shown no mercy to the people of Istanbul, where snow has blanketed the city for the last three days. Throughout the city's history, many other toughest winters arrived with old photos showing ice masses on the Bosporus and locals still enjoying the city's snowy beauty

Arriving late on Friday, Old Man Winter has been striking with vengeance, showing no mercy to Istanbulites, many of whom were stuck in traffic that had already reached 90 percent density by the evening hours.

While certain parts of Turkey's west have been spared from the harsh winter, except for chilly temperatures and rainfall, the rest of the country has been dealing with heavy snowfall.

The city embraced a white blanket on Saturday after heavy snowfall that is still briskly falling. Many have already done their part to stay safe at home during the weekend or went out to enjoy it with friends. 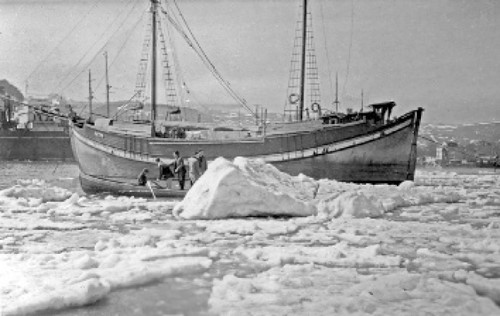 In the 1954 winter, ice masses that came from the Danube River were told to cover the Bosporus.

Despite the fully equipped crews and technological marvels help citizens to bear the frosty temperatures and wind gusts gripping the region, the harsh reality of winter prompts us to recall how a powerful natural phenomenon can shape history over the centuries. In this regard, Istanbul, or the then Constantinople, is no exception.

A striking photo from Cengiz Kahraman's 2015 photobook "İstanbul Kış Günlüğü" (Istanbul Winter Diary) features a couple of style-conscious men standing on a pier with two ships on the Bosporus filled with ice. It was March 1929, when winter hit Istanbul with such extreme temperatures that it reportedly allowed locals to walk over the Bosporus between the city's European and Asian sides. 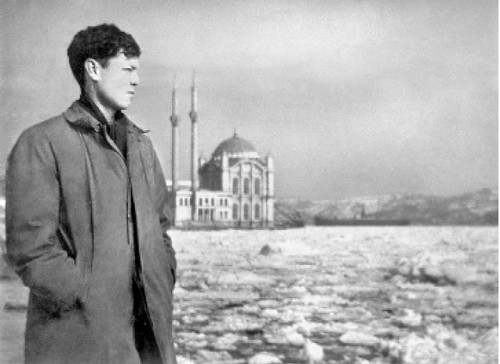 A scene from the 1929 winter in Istanbul from Cengiz Kahraman's book "Istanbul Kış Günlüğü."

Long before this, some of the worst winter weather came around Constantinople in the 8th century. The horrible chill of harsh winter shaking the surrounding region helped the imperial forces to avoid defeat against the Arabs during the 2nd siege of Constantinople. Popular English historian John Julius Norwich describes the 717/718 CE winter as "the cruelest winter that anyone could remember." From the 5th to the 8th centuries, historical accounts mention consecutive freezing winters accompanying starvation and plagues, like the one in 401 CE, during the reign of Arcadius.

More winter tales give insight into Ottoman Istanbul. Historian Necdet Sakaoğlu reported a one-month deadly winter in 1573 followed by two others in 1621 and in 1754. Taking over the throne at a very early age, Ottoman Sultan Osman II ruled the empire in the 1620s. The period's eloquent literary accounts describe the frozen Golden Horn, incessant snows and ice covering the distance from Üsküdar on the Asian side to Sarayburnu on the European side.

A train entirely covered with snow, two men posing in front of a snow giant and another two cheerful Istanbulites wave their hats on an iceberg on the Bosporus in black-and-white images from the 1929 winter, when the non-stop snow obstructed shipping as well as ferries and transport within the city. Another image from The Istanbul Winter Diary, dating 1929, lays bare the density of snowfall with two locals clearing the road in Göztepe and the snow already double their height on each side.

As would be expected, there are better sources for the winter stories of the republic era, with old photos and newspaper pieces. For some, the 1929 winter was the worst for Istanbul - hopefully 2017 will not surpass it - and also other territories, including the Balkans, where the Danube River was said to have frozen over and masses of ice came all the way to the Bosporus from this river. The photo book compiled of images from both amateur and professional photojournalists, also documents the winter of 1954 with similar icy scenes, the rush of ferry passengers and boats struggling in the tough winter.

A more recent paralyzing winter surrounded Istanbul in March 1987. Many Turkish locals generally stay prepared for unpredictable weather conditions until spring visibly comes, following the saying "Never cast a cloud till May be out." More than 60 cm of snow was measured in Istanbul that year, marking a time many of the city's residents still remember. The snowfall hit Istanbul for around two weeks and disrupted many areas of the city. A local newspaper headline reads, "Yüzyıldır böylesini görmedik'" (We have seen nothing of the sort for a century) while another one says "Istanbul'da kar paniği sürüyor" (Istanbul in a state of snow-panic).

This year, many have found themselves unprepared for the knee-deep snow still growing and the biting cold, but the one common truth you should remember for both snowy day lovers and snowy day haters is that Istanbul looks even more beautiful in the snow.