Cyprus dispute: An island at a crossroads 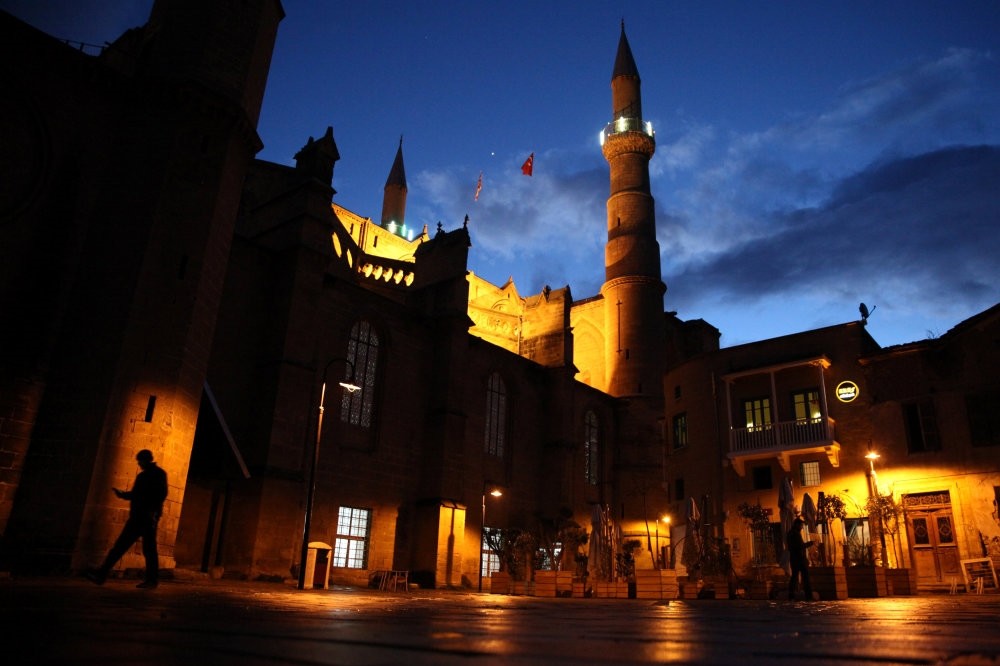 A man walks near the Selimiye Mosque in the old quarter of the Turkish-administered northern part of Nicosia.
by Ekrem Buğra Ekinci Jan 20, 2017 12:00 am

Reunification talks on Cyprus, a divided island in the Mediterranean Sea, are back on the table with Turkey, the U.K. and Greece. Through the ages, this small island has remained at a critical junction with long-term Turkish influence

The Byzantines, Crusaders and Venetians have all established dominions in Cyprus, which was also captured briefly by the Muslim Arabs in the 8th century. The island was conquered by the Ottomans in 1571 after the Venetians began threatening the road to Egypt, and Hejaz, the region of present-day Saudi Arabia, was managed as an ordinary Ottoman state for three centuries. However, the region was put under the governance of the British in return for their support of the Ottoman government during the Treaty of Berlin, signed following the Ottomans' defeat in the Russo-Turkish War (1877-1878).

As the treaty suggested, the rule of the Ottoman sultan was to continue in appearance; Muslim judges and muftis were to be assigned from Istanbul, and the after-expense profit of the island's revenue was to be sent to Istanbul. Furthermore, English, Turkish and Greek became the official languages of the island. When the defendant of a legal case was an Ottoman citizen, Ottoman law was to be practiced; however, in any other cases, British laws applied. The social status of the Greeks and Turks would be determined by the community council.

Britain's desire to establish its dominion over Cyprus caused enduring disputes between the British and the Ottomans. In 1914, the U.K. annexed the island instead of returning its governance back to the Ottomans. In the Treaty of Lausanne signed in 1923, the Ankara government officially recognized the U.K.'s rule over Cyprus. From 1925 [official] until its independence in 1960, Cyprus was given the status of a colony under the British crown.

In 1959 the government led by former Prime Minister Adnan Menderes succeeded by possessing a more influential voice on the island, and Turkey gave up all its rights in the Treaty of Lausanne. As a result of the negotiations with the U.K. and Greece, the Republic of Cyprus became a country based on a cooperative federation idea, similar to how Lebanon and Belgium were established. The president would be Greek while his/her vice president was to be of Turkish descent.

The municipal affairs as well as the number of soldiers and police forces were determined according to the general population, which was 70 percent Greek and 30 percent Turkish. Since many Turks left the island after the dominion of the British, the Turkish population was on the decline in Cyprus. The U.K. kept two military bases, and Archbishop Makarios III became the president while Fazıl Küçük, the leader of Turkish community, became the vice president.

Both Turkish and British governments supported the modernist-traditional division of the Turks on the island. In 1942 Küçük, the leader of the Modernists stated, "If the Turkish Cypriots accept the label of Islam, either the motherland will become distant from Cyprus or Cyprus from the motherland," and the modernist began to object to the Islamic law, madrasahs, Arabic alphabet, Arabic azan and the authority of the mufti.

The Mufti of Cyprus was the second man in the protocol after the governor during the colonial period of the island as the leader of the Muslim community. When the office of mufti was abolished, his position was taken over by the Orthodox Pontiff automatically. Thus, the control of the wealthy waqfs on the island passed down to the secular authorities. There is no mufti or a school that provides religious education on the island even today, which weakens the religious life on island enormously.

Upon the pressure of the Greeks, who were not happy about the new political environment, Makarios proposed a change in the Constitution in 1963. When the Turkish community rejected this proposition, the Greeks began to terrorize the island. Makarios announced that they should annul the 1959 London and Zürich Agreements which had led the way to the Constitution of the Republic of Cyprus. The new leader of the Turkish Cypriots, lawyer Rauf Denktaş, encouraged Ankara to step in; however, the then-U.S. President Lyndon B. Johnson warned the Turkish government to stay out of the matter. Although the diplomatic contacts of Ankara and the flights of the Turkish jets over the island helped settle the incidents, the opposition against Makarios increased among the Greeks.

The putschist colonels who came to power in Greece in 1967 attempted to annex Cyprus by inciting the heroic deeds of the Greek community in order to mask their domestic problems. To achieve their goal, Grivas traveled to the island in secret and staged a coup, and Makarios fled to London. Former EOKA member Nikos Sampson became the president of Cyprus. In all appearances, the coup benefited the U.S. and Israel and was to the detriment of Turkey and Russia. Meanwhile, the Greeks began to orchestrate provocative demonstrations against the Turks. According to the London and Zürich Agreements, Turkey was one of the three guarantor countries along with the U.K. and Greece. Following silence from London, Turkey exercised its right as a guarantor and landed its troops on the island on July 15, 1974, only five days after the military coup.

In fact, Russia provoked the leftist government in Ankara, which believed in the strategic importance of the island for Turkey, enough to land troops. However, the Turkish soldiers did not withdraw from the island once order was secured. Cyprus was divided into two sections, just as Denktaş and his team had hoped. The two nations on the island had to be relocated. Upon this, the U.S. imposed an embargo on Ankara. The Turkish economy was crumbling. The anti-U.S. Republican People's Party (CHP) along with the National Salvation Party (MSP) coalition fell.

In time, Washington began to support Turkey's presence in Cyprus as its strategic profit from the island, which was sometimes threatened by the British and Greek governments. This move was also to the advantage of Israel, which is located right across Cyprus. Makarios's intimacy with Russia and Russia's plans to settle down in the Mediterranean, right across Israel was not good for the U.S. or Israel. Nevertheless, even Russia began to see the use of Turkey's presence on the island. Hence, the Cyprus dispute was born.

A small, controlled state, supported by Turkey and recognized by no one, was founded in the north of the island. For the Turkish community on the island a desperate isolated life followed, and their domestic income dropped way below their Greek neighbors. Turkey's sole investment on the island was the casinos. Although the Greeks have not interfered with the property rights of the Turks on their side of the island, holding onto their claim of the continuity of the legal stage, the properties belonging to the Greeks on the northern side of the island were taken under the possession of the new political actors. Turkey has had to pay sizeable amounts of money to the Greeks because of this property-right problem, which Denktaş could not even bear to discuss. In short, this matter brought happiness to no one except for a small minority who were fed up with the Cyprus dispute.
RELATED TOPICS