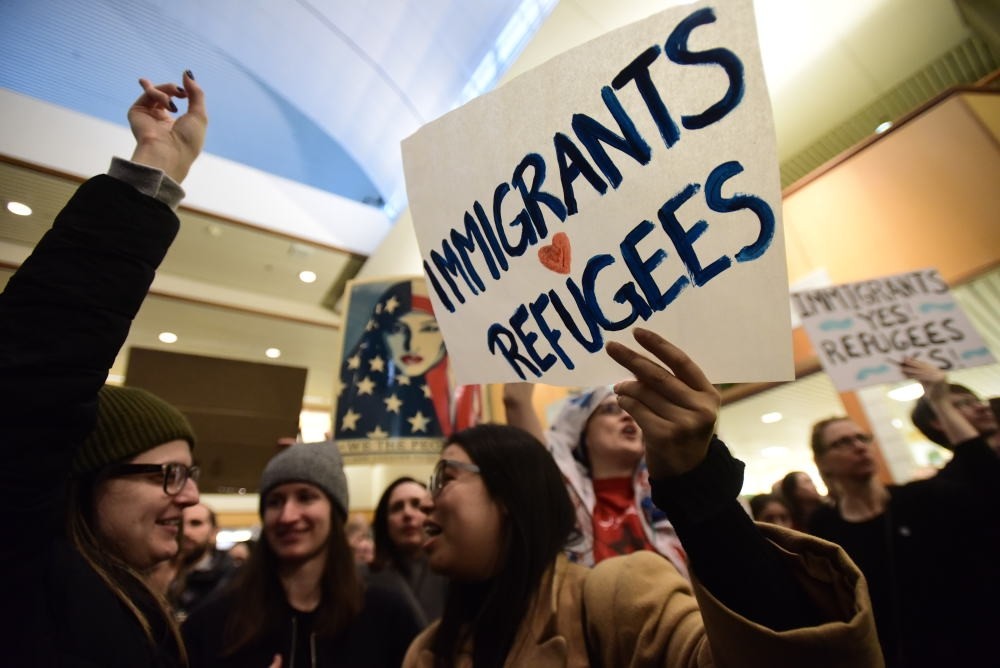 Protesters hold signs as they block a road during a demonstration against the immigration ban at Los Angeles International Airport.
by Elif Kavakçı Feb 01, 2017 12:00 am

U.S. President Donald Trump's travel ban on seven Muslim-majority countries has sown nothing but discord across the world. At Dallas International Airport, the protests against detaining travelers continued into the wee hours of the morning on Saturday, attracting hundreds of people saying ‘No ban, no wall'

"Muslim rights are human rights," echoed the DFW international airport in Dallas, U.S. at 9:30 p.m. on Saturday evening. The majority of the people who chanted these words were non-Muslims. There was an amazing spirit in the air, one that was full of unity and brotherhood.

On Friday Jan. 27, 2017, U.S. President Donald Trump signed an executive order to ban Muslims from seven countries, namely Iran, Iraq, Syria, Sudan, Yemen, Libya, and Somalia, from entering the United States. Ironically, as news outlets pointed out, Friday happened to coincide with Holocaust Remembrance Day. While most of the country continued to be appalled at Trump's unreasonable orders, a majority of citizens did not realize what the country would face until the next day. 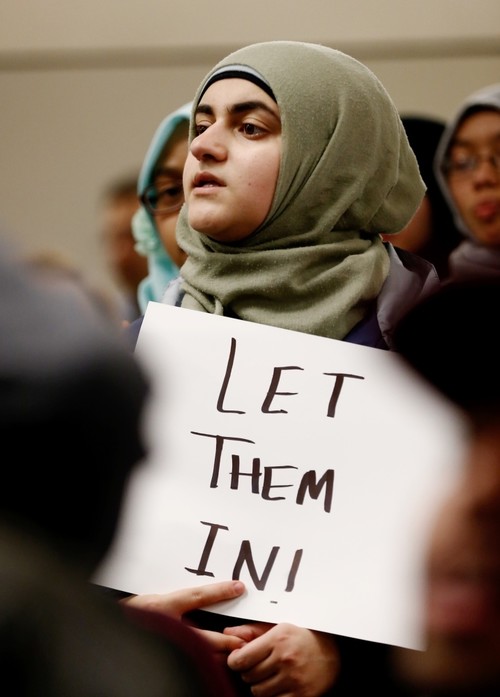 A protester demonstrates against the travel ban at Dallas International Airport.

On Saturday, Jan. 28, 2017 news of travelers being detained at airports across the country went viral on social media. Saturday afternoon, I was sitting with my daughters at La Madeleine, a popular French Cafe in Dallas. Sitting by the fireplace, sipping our lattes, an older gentleman who was probably in his 70s approached our table. I had noticed him looking our way when we first sat down at the table but did not give it a second thought. He gracefully approached us by first asking to be excused for disturbing us while we were eating and continued to state that he is very sorry for the current Muslim ban being implemented in the country. He apologized over and over. He added that he is a Jewish man who knows what it is like to be discriminated against. He said many Americans are against the ban and that they do not support the president's decisions. I thanked him for his kind words and his sweet gesture.

As I continued to drink my latte, I began browsing the news and noticed that 50 Muslim travelers who had landed to DFW airport were being detained. Muslim leaders were calling on everyone to come out to join the protest at the airport. We gathered our things and headed to the airport. I immediately called my nieces, who also told their friends to head to the airport. The protest was taking place at DFW International Terminal D4. I had never seen this terminal, let alone this airport, with so many people. This was the same gate that I had walked through when we first migrated from Turkey to the U.S. on April 29, 1988. This was the same gate where we had seen the smiling faces of passport and customs officers who had concluded their questions with "Welcome to Dallas." This was our second home away from home. In fact, within the 29 years of our stay in this city, we had traveled to and from this gate internationally, at least once every year. This was the same gate that welcomed my in-laws when they came to visit, the same gate that welcomed my grandmother, my aunt and uncle, my cousins and relatives from Turkey. While there is only one international terminal at the DFW airport, and many flights landing simultaneously, I had never seen a crowd as big, as packed. 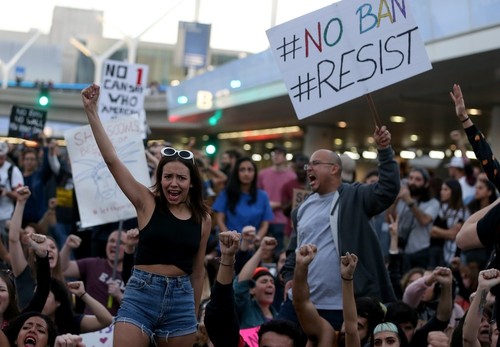 Protesters hold signs as they block a road during a demonstration against the immigration ban at Los Angeles International Airport.

My girls and I tried to squeeze into a spot among the protesters. The stamina, the energy at the terminal was indescribable. The people of Dallas united in resistance against the detention of Muslims. There were volunteers passing out water bottles, chips and snacks. Every now and then a pizza box would appear in the crowd being handed from one person to another. Protesters with children would grab a slice to feed their little ones. The crowd, the love, the determination was proof that humanity was resisting discrimination. While those in power may want history to repeat itself, the will and the voice of the people would prevent it from happening.

The chants at the terminal changed intermittently. "U-S-A-! No Trump, no KKK, no fascists here!" chanted the crowd, followed by, "Show me what democracy looks like? This is what democracy looks like." "No ban, no wall, refugees are welcome here," was repeated over and over again. Another chant that was in chorus and accompanied by applause was, "Let them go! Let them go! Let them go!" The posters were as diverse as the crowd protesting. One sign read, "Jesus was an immigrant too." Another read, "No fear, no hate, refugees are welcome here." The protesters stayed into the wee hours of the morning. The ones that left to go to sleep were replaced by those who rested and came back to continue to protest. As I write this, a number of thoughtful Americans are still continuing to resist the ban around the country.

As of 6:00 p.m. local time on Sunday, Jan. 29, 2017, with the help of Dallas Mayor Mike Rawlings, Shaykh Omar Suleiman, Council of American Islamic Relations, pro bono attorneys and the hundreds of protesters, all 50 detainees at DFW airport have been released from custody and are with their families. Thank you Dallas. Thank you America. Thank you humanity. United we stand, divided we fall.
RELATED TOPICS