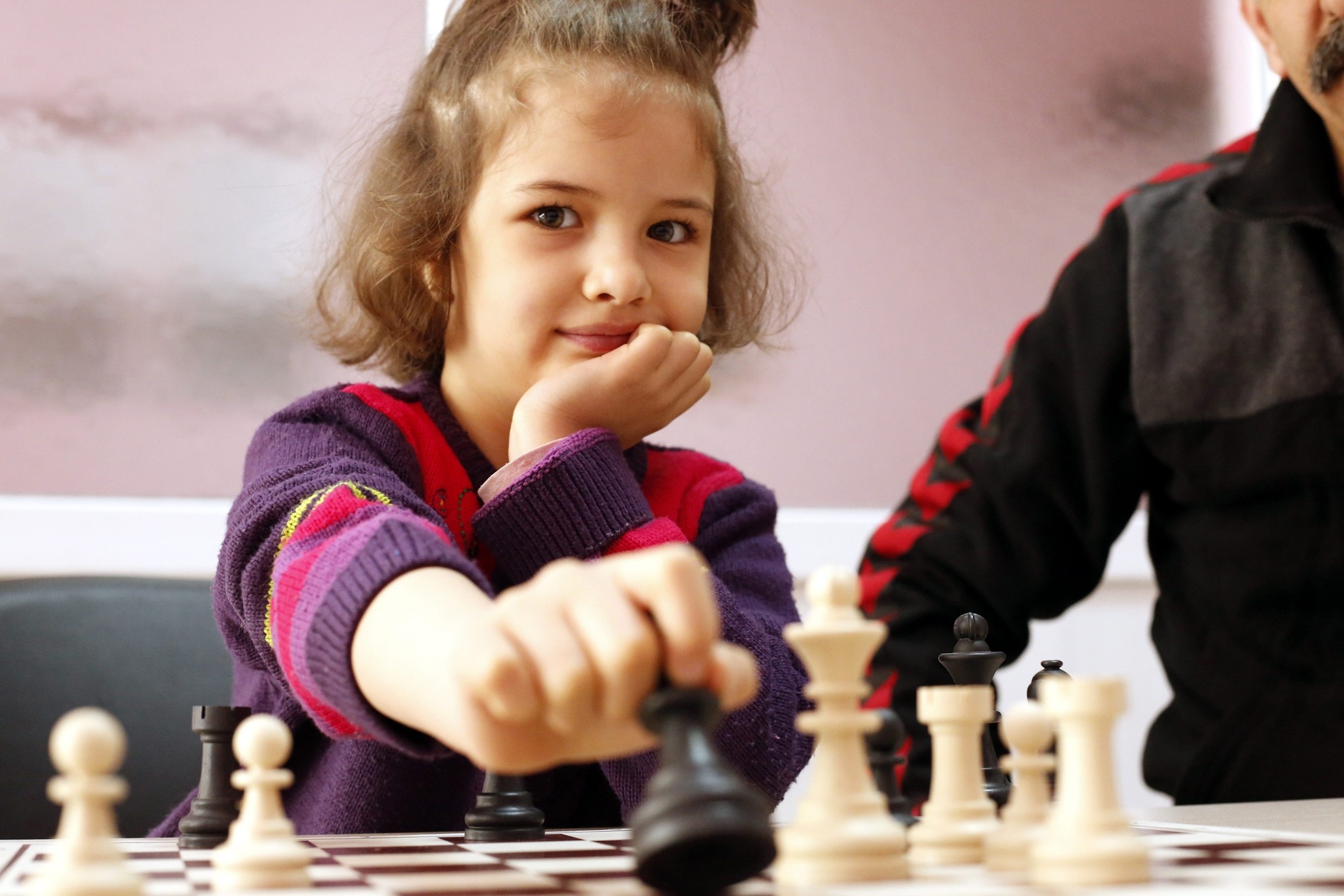 A small girl from Turkey's eastern Elazığ city, Kübra Yıldız is under intensive training for the upcoming European chess championship. Having started to play chess at the age of 5, the little girl shows exceptional skills and has become a national chess player

In the province of Elazığ in eastern Turkey, a seven-year-old girl sits at a chessboard with her sister engaged in a prolonged and fierce battle of the mind. While the two girls are engage in this combat intellectual, fighting for supremacy over the family chessboard, one of them is motivated by a much higher victory - to become a world champion chess player.

For Kübra Yıldız, the dream is simply another chapter in the intriguing story of a young national chess player's journey to success. Upon entering the Turkish national Chess Tournament in the coastal city of Antalya in January, where she competed in the 7-year-olds' category, Yıldız won the top prize and now has her sights set on the upcoming European Chess Tournament.

Her perseverance, coupled with the dedication of her family, is a real-life example of how high achievements can be reached through disciplined training and the support of loved ones.

Winning eight out of nine chess matches and tying one, Yıldız has already started training in preparation for the national team camp that will be organized for the European Chess Championship under the supervision of Turkish Chess Federation referee and trainer Yusuf Görgülü at one of the largest Turkish Chess Foundation-sponsored tournaments.

According to Görgülü, players on the Turkish chess team are chosen from among the most successful players and Yıldız was barely five years old when she was first introduced to chess and in just two years has shown exceptional success: "Yıldız's playing technique was striking; moreover, the preparation session was very good. While she honed her skills in additional practice with Eşref Işık, her technique is undoubtedly related to her personal skills and natural talent as a chess player," Görgülü said.

Kübra has followed the footsteps of her sister, Esma, who motivated her younger sister to enter the world of chess. The young champion said that she feels very happy when she beats her sister, noting: "Playing chess makes me happy and I enjoy it more when I play with my sister. Even though I like chess, especially the strategic moves and the beautiful chess pieces, I like winning the most. I was the champion in Elazığ and now I have become Turkey's champion. Next, my target is to become the world champion," she asserted.

Recalling that her love of chess and personal will are more important than simply being successful at this "mind game," Görgülü said that when they examined Yıldız's strategies and overall performance, they were struck by her ability to make very good moves and discussed this with other trainers on the national team, who were also impressed with her game. "She qualified for the national team and became Turkey's champion. Now, she will represent Turkey in the European and World Championships. She also has a good chance of winning," added Görgülü, remarked that he believes chess will be an important part of her life from now on.

Yıldız's family supports their daughter's aim of becoming a professional chess player and has done everything in their power to ensure that she has all the opportunities necessary to achieve her dreams. Her mother, Nülüfer Yıldız, said Kübra's interest in chess began when Esma started attending chess club at school. That was when they contacted trainer Görgülü for professional training. "When Esma started playing chess Kübra said, 'I want to go to a chess club as well,' out of the blue. I thought they wouldn't accept her as she was very young but I thought it would be better for her to hear this from Görgülü. But as he noted that the best age to start playing chess was five, we started Kübra and Esma's chess adventure," says Yıldız.

The little chess champion is a very quiet child and started to speak at the age of four which, according to her mother, made her asocial. Her mother said that although she could not speak, she was able to comprehend everything she was told. Her mother noted, however, "This obviously caused people to pull away from her. She placed a lot of importance on what her sister does; so began participating in chess club. With the support of her sister, she learned how to read before she started school."

Esma said that she was very glad her sister took after her and that she teaches everything she learns to her younger sister. Underlining that Kübra comprehends chess-related concepts and constantly develops her skill levels with ease, Esma noted that they visited tournaments together and won the chance to go to Antalya where Kübra became the champion. She said, "It makes me very happy to see my sister succeed."She also said that she is very glad she has played a part in her sister's success, adding: "Sometimes I get scared that she's going to beat me. However, I want her to have more success than myself. Last year's target was to become the champion of Elazığ. Now we are ranked first and second in Turkey. We will enter Turkey's national pool and hope to attend and win the world championships in Europe," Esma said.
RELATED TOPICS