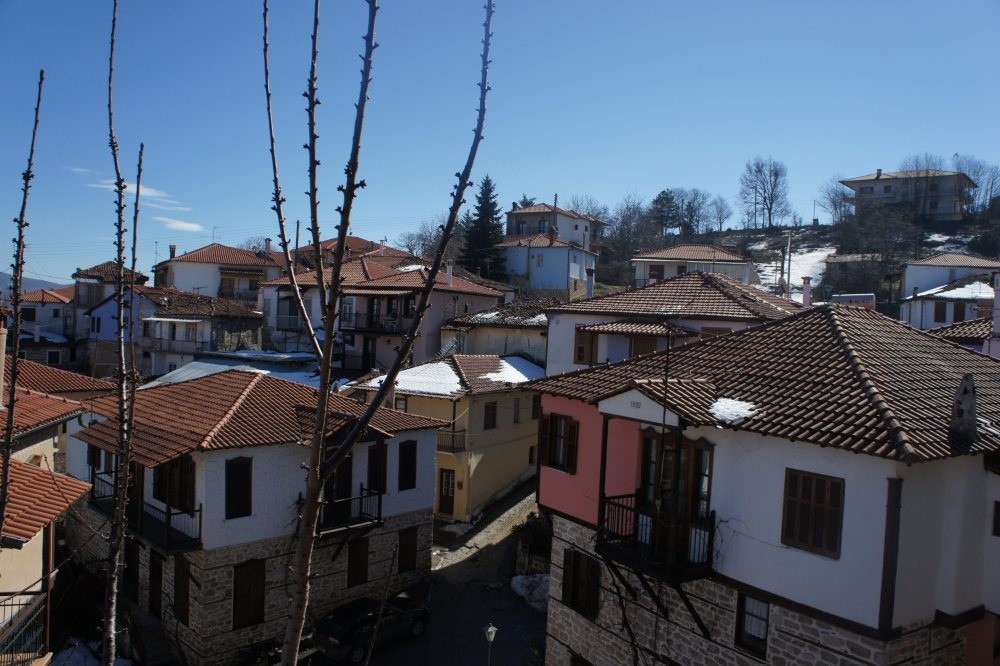 The village of Arnea in Thessaloniki has an Ottoman past where it hosted Greeks that came from Anatolia during the 1924 population exchange.
by Ekrem Buğra Ekinci Feb 17, 2017 12:00 am

After the Ottoman Empire lost its territory in Rumelia, now referred to as the Balkans, Turks living there migrated to Anatolia over times. However, Turkish existence in Rumelia dates back, even before the arrival of the Ottomans

Most Turks of Rumelian origin claim that their ancestry could be traced back to the Central Anatolian province of Konya. The claim is indeed rooted in truth, given the fact Konya used to be a vast governorate that included the modern-day Turkish provinces of Karaman, Mersin, Antalya, Niğde and Aksaray.

The city was an important center under the Seljuk Empire in the Middle Ages and was home to a large Turkish population at a time when residing near the central power was a source of security and privilege for people. The existence of a Turkish population in Rumelia, however, goes back long before the Ottoman conquests. As early as in the 9th century, Byzantines settled Turks, who came from Anatolia in great numbers, in different parts of the Balkans including Thessaloniki, Serres, Thessaly, Vardar and Varna.

The Ottomans set foot in Rumelia during the reign of Orhan Ghazi, the second sultan of the Ottomans. However, settlement in Rumelia began later in the times of Sultan Murad I, the third sultan. The Ottomans discovered numerous empty villages with endless empty fields. Contrary to some popular beliefs, the Ottomans did not send the local population on exile or exterminate them. The Balkans had fallen vacant due to wars, famine and infectious diseases during the Turkish conquest.

Turks from Konya, Kastamonu, Balıkesir, Manisa, Aydın and other provinces were then brought in and resettled in these new lands. All these provinces were once the centers of Turkic beyliks, hence, highly populated. By relocating these people, The Ottomans populated the newly conquered lands and memories of the historical former beyliks were eventually eased, securing the future of a united Anatolia.

Turks relocated in the Balkans were provided with lands and certain privileges were granted as well, by means of which, those, not willing to settle in the newly acquired lands were convinced. The Ottoman "settlement policy" that involved recognizing newly conquered lands as homeland and then have people settle there, was one of the principles that kept the empire on its feet for centuries. 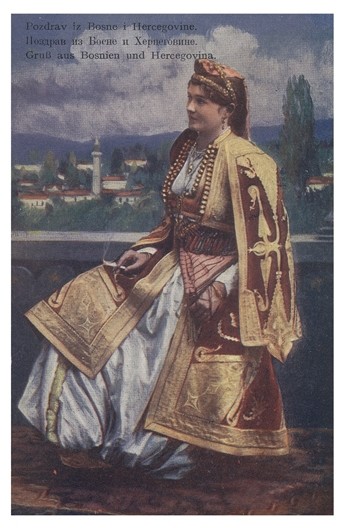 A postcard depicting a Bosnian woman from the Ottoman period.

The stream of the Turkish populace migrating to Rumelia did not solely come from Anatolia. A great number of people also came from the northern Black Sea region. For instance, Sultan Bayezid I relocated Crimean Tatars in Dobruja, which he had taken from the Bulgarians. Following Tamerlane's Anatolian invasion, more than 100,000 Kipchak Turks, traveled through Romania then Danube and settled in the Edirne, Plovdiv and Pazardzhik provinces. The Turks living in northern Bulgaria today are the descendants of those people. Nearly a million Turks settled in Rumelia over the course of a century and the population spread all over the region. Over time, Rumelia became one of the most prosperous regions of the Ottoman Empire while its people became known as intellectuals, decent, and religious subjects and were generally regarded to be among the most cultivated. They were accompanied by men of religion and dervishes. Villages and towns were established around the axis of mosques, madrasahs and dervish lodges. Remains of these lodges and tombs can still be found on every step from Rumelia to Hungary.

The higher qualifications of these new residents raised the interest among locals of Rumelia, leading many of them to convert to Islam. A great number of Bulgarians, Macedonians, Croatians, Albanians and Greeks are known to have converted to Islam around that period.

A great portion of Rumelian Turks were partly nomads before they settled down. They resided in villages in winter time and hiked to highlands with their herds of sheep in summer. However, by the 17th century, they pretty much adopted a sedentary life. The Ottomans formed military troops of 24 men each from these communities. Starting from 1691, new military troops with ambitious names such as "Evlad-ı Fatihan" (The Children of the Conquerors) were established among the Turkish communities who wanted to benefit from the restless atmosphere in Rumelia.

"Yörük Hakimi," (Nomad Governor) whose rank equaled that of a vizier was assigned as the head of these troops. They were exempted from paying taxes for their services. Those who did not participate in military campaigns paid taxes to cover the livelihood of the families of those who participated.

Towns such as Bitola, Prilep, Florina, Cuma, Tikves, Radovis, Stip, Dojran, Strumica, Kilkis, Giannitsa, Edessa, Serres, Demir Hisar, Zihne, Dramar and Langadas had their own "Evladı-ı Fatihan." Most of them came from Konya and because of this reason locals called them "Konyar." Around 16,582 people from 11,161 households belonged to this class in 1697.

"Evlad-ı Fatihan" only participated in military campaigns in Rumelia at first. However, toward the end of the 18th century, they began to participate in eastern campaigns as well and the same troops were also used in tracking down bandits in 19th century. Eventually, the term "Evlad-ı Fatihan," began to be used for all Turks residing in Rumelia. Following the formation of the regular Ottoman army in 1845, all privileges of the "Evlad-ı Fatihan" were abolished and its members were obliged to regular military duties, making the institution a thing of the past.

The once thriving Turkish population in Rumelia shrunk following a series of wars and confrontations, including, the Greek Revolution in 1821, the Russo-Turkish War in 1877, the Balkan Wars in 1913 and the 1924 Greek-Turkish population exchange as well as pressure from the Bulgarian resistance movement. The Turks in the Balkans, unable to bear the constant pressure, eventually migrated to different parts of Anatolia.

In the later part of the century, some settled in Anatolia following an agreement between the Ankara government and the Balkan states while some returned so as to escape assimilation policies of the socialist governments after 1945.

Although not all Turks living in Rumelia had the "Evlad-ı Fâtihan" status, they were still called as such in Anatolia, just as a reminder of an age gone by. Today, there are still many Turks living in Western Thracian, Bulgaria, and Macedonia as well as in many other Balkan nations.
Last Update: Feb 17, 2017 2:11 am
RELATED TOPICS