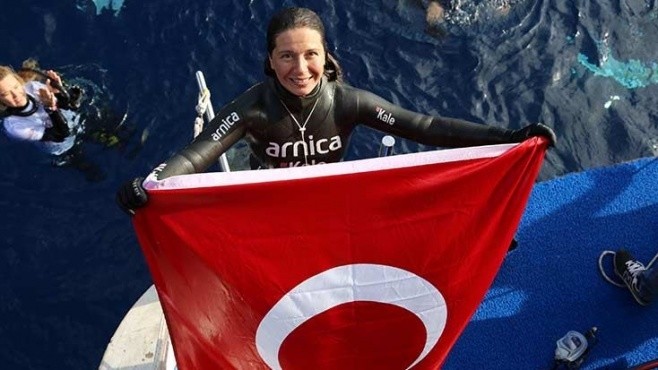 Almost two weeks ago, national diver Derya Can broke a new Guinness World Record for the longest free dive under ice. A mother of two, the Turkish diver never leaves her children behind in her trips around the world, saying she takes much of her strength from her family

Free diving is a perilous passion: The diver has no tank and is required take a deep breath and dive as deep as possible. A mother of two, Derya Can, a Turkish female national diver, recently set a new Guinness World Record for the longest free dive under ice by diving 120 meters horizontally under the frozen surface of the Weissensee Lake in Austria.

Holding her breath under the 35-centimeter ice-coated lake, she managed to swim 120 meters in 1 minute 47 seconds. With the water temperature at 1 degree Celsius, Can broke French apnea diving athlete Aurore Asso's 112.3-meter record and dedicated her new success to Turkish women.

Can was only 15 when her underwater adventure kicked off with scuba diving. Before this, she had already engaged in a variety of sports like athletics, taekwondo, handball, skiing, swimming, underwater hockey and underwater rugby. She was afraid of the deep blue sea at first, but she overcame her fears with her passion for the sea.

Over the years, Can has become a world record holding national underwater athlete and has brought the first medal in free diving to Turkey. Born and raised in the western province of Çanakkale, Can said children born in her hometown have an instinctive relation with the sea like herself.

"My journey started at the age of 1.5 when I jumped from a pier into the sea. My father was curious, so he left me there, then I had no choice but to try and swim," she said.

When she was a small child, she said she would get scared when she looked into the depths of the sea.

"Now I have six world records, and I have gradually overcome this fear. But I have not still completely escaped from it. I find that the color of the deep blue seems both frightening and peaceful at the same time," Can added.

To become an accomplished diver, one of the most important things is to train on the ground like an athlete.

"You need to be very determined to break records. I owe it to my training, including running and cycling. Of course, I have nerves of steel thanks to the years long training. After a certain point, this turns into a psychological battle between you and your competitors," she said.

Can believes that those who can put up with all kinds of challenges with a strong psychology can outscore their competitors or win medals.

Answering a question on how she prepared for her recent record-breaking attempt, Can said that it was a difficult and extreme.

"My aim was to wave the Turkish flag in [Austria], which is in the heart of Europe, and to show the power of Turkish woman before Women's Day," she said.

Diving into water covered with 40-centimeter-thick ice is both physically and psychologically challenging.

"It is not like diving into a pool or the sea. I am the first woman who tried this record in our country with this track. Normally, similar records were made with a single line, but I completed the distance of 120 meters with a 60 meter-turn. It was a risky attempt as the ice might have been melted," she noted.

The accomplished diver says she takes much of her strength from her family, mostly her children.

"My priority is my family. I cannot practice as much as I used to. The 2016 World Championship was held in Kaş. My children were also there, but they got restless before the races. I joined in the race without sleeping much, and I ranked third in the world. In fact, you overcome these things when you practice more and more," she continued.

Interestingly, Can says she still has a fear of the deep blue sea to a certain extent.

"Diving into the deep blue of the sea makes you feel an eternal pure peace, but I cannot say I have overcome my fear of depth. Fear and discouragement are two separate feelings. I am a person who likes to face her fears, and I see the battle with nature as the deep blue's acceptance of me rather than a battle with myself. And I dare say that is what fuels me further. The deeper I dive, the more I find myself," she said.

"I feel as if there is something missing without my children. As a mother, they need me now. My profession comes next. It's hard to compete while you take care of them, but while I manage these things under these circumstances, it's going to be a pleasure doing it with my hands on the back of my neck when they grow up. My son grew up in gyms and pools. He is pleased that I broke the world record. My daughter is growing in the same environment now. I think she will also be interested in sports in the same way," she concluded.
RELATED TOPICS