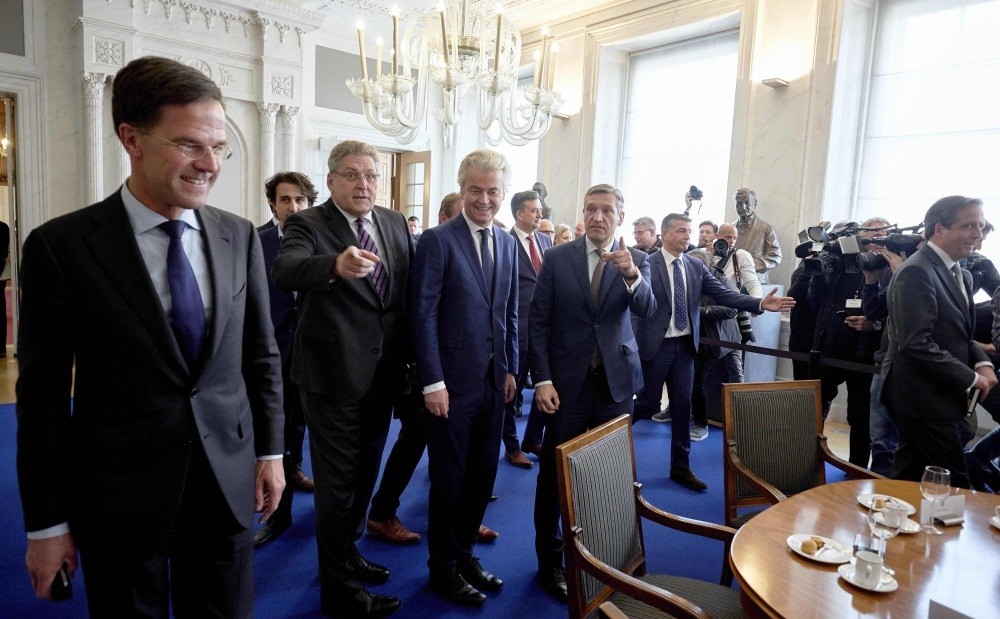 Dutch PVV leader Geert Wilders (C) and Dutch Prime Minister Mark Rutte (L) arrives for a meeting between main parties leaders and the Chairman of the Senate in The Hague, on March 16, 2017, one day after the general elections.
by Jane Louise Kandur Mar 18, 2017 12:00 am

It is election time. Terrible things are happening in Europe, with mummers dressed up as Ottoman Turks parading down the streets, scimitar in their hands. Such parades are based on ancient traditions, but the fact that their red fez has the word ‘Hayir' (Turkish for ‘No') emblazoned on their heads, and that unflattering caricatures of the president of Turkey are being held high by these ‘Turks,' means that such events have taken on a new dimension

We, here in Turkey, are used to this. Turks were wheeled out by the "Leave Europe" campaign in the U.K. for Brexit. The fear was instilled in people that if they remained in Europe, the flood gates would be opened and 80 million Turks would come and take the jobs of the hard working British employees

And you know what? It worked. Britain voted to leave Europe.

Last week, Mark Rutte, head of the Dutch Party for Freedom and Democracy, a conservative-liberal party, created a diplomatic row out of thin air, refusing permission to a Turkish minister to enter the Turkish embassy, and refusing permission for the ambassador to egress from the embassy. None of this was necessary, and these events have sparked very negative reactions in Turkey.

Coming on the heels of Trump's banning of citizens from seven Muslim countries from entering the U.S., for the Turks what happened in Rotterdam is just another aspect of Muslim hating. When you Add to this the privileges given to the PKK, an internationally recognized terrorist group to hold large rallies in the best locations in many European countries (including Holland), the plethora of "Hayir" slogans, appearing even in European newspapers, it is surprising that the Turks feel Europe is manipulating popular opinion against them? Hey, it worked in Brexit, why shouldn't it work in the national elections of other European countries?

And in Holland it worked.

Rutte tried to distance himself from the anti-Muslim populism that worked in Britain during Brexit and that worked for Donald Trump; he said: "This was an evening when … the Netherlands said 'Stop' to the wrong sort of populism."

I guess the right sort of populism is that which ensures he serves as prime minister for another term. Mevlut Çavuşoğlu, the Turkish foreign minister, said it much better: "You look at the social democrats and the fascist Wilders, there is no difference, they have the same mentality." Both parties wanted to drum up hatred and fear of foreigners to win votes. Wilders does this because this is how he functions; he thrives on hate-speech. It is not unlikely that Rutte and his government created the storm in Rotterdam for the very same reason. If you can't beat 'em, join 'em.

So now Rutte is set to continue as prime minister of Holland. He fared better than Cameron, who had to resign after the Brexit debacle. 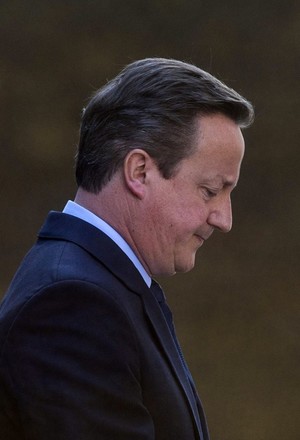 The replacement of Cameron by May has not made great changes in the British political scene. It has been a fairly smooth transition. But that is British politics. Even the last change from a Labour government to a Conservative government did not make huge waves.

There is a very simple reason for this. British prime ministers, be they Liberal Democrat, Labour or Conservative, all come from basically the same stable.

Of the more than 70 prime ministers who have served since Walpole in 1721, the majority were educated at Oxford or Cambridge. A few attended other universities. Others, like Churchill, had a military career. In the early years there are those who did not attend university; but they came from the aristocracy and had no need for a university education.

Very few of these British leaders could be said to be a "man of the people." They come from the privileged, white male upper classes. Although two prime ministers have been women, these women have managed to succeed in their position by being tougher than the men. It is no accident that Lady Thatcher was known as "The Iron Lady."

In the land of the free and the brave, the "birth place" of democracy, that is America, is the situation any different?

Among the 44 American presidents some came from poor backgrounds, some from wealthier ones. There are highly educated presidents and there are those who educated themselves.

But at the end of the day they are all, with the exception of Barack Obama, white males. And one mustn't forget that Obama was born into a middle class family, and had a very middle class upbringing.

Richard Nixon's family went bankrupt and lived in a rented apartment. The family had a farm, but it failed. However, even then the family had enough money to buy a grocery store, which later they converted into a restaurant; eventually they opened another four locations.

Clinton's mother was a widow, and struggled when her son was young to make ends meet. Yet, as a teenager Bill Clinton was learning to play golf. Golf is not a game played by those living near the poverty line.

So even the poverty of Richard Nixon and the hard times of Bill Clinton are relative. Privilege in that one is male and belongs to the middle class seems to be a necessary qualification to secure the American

Presidency. Being a white male is certainly an advantage.

In Turkey there have been 38 prime ministers and 12 presidents in less than 100 years.

The vast majority of the Turkish prime ministers and presidents has been made up of white males (the exception is Tansu Ciller). Class in Turkey is not measured by graduation from Oxbridge, nor from being a member of the white middle class. There is a very much more limited group that held the reins of power. All the Turkish presidents bar three were from such a background. Abdullah Gül and the current president are from much humbler beginnings. The third president to not emerge from the elite in Turkey was Celal Bayar. Bayar's father was a religious teacher who had immigrated from Bulgaria.

What is interesting is that Bayar, who started out in the Republican People's Party (CHP), was one of the founders of the Demokrat Parti in 1946. This party was a conservative-liberal party. As chairman of the party, Bayar was elected by Parliament to be president of the country (while remaining chairman of the party). He served a total of 10 years as president.

Bayar was overthrown, along with his prime minister Menderes, by a coup d'etat. They were arrested and sentenced to death by a junta-appointed court. His death sentence was converted to life imprisonment, but in 1964 he was released due to poor health. Bayar was pardoned in 1966 and was restored full political rights in 1974. He was offered a position for life in what was then the Senate, but refused, stating that one should only represent the people if elected.

The family background of the prime ministers of Turkey are varied. There are those who received military education, who were privileged and walked upon a path paved with opportunities. Then there were those who were children of teachers, postmen, mechanics or members of the coast guard. These individuals pulled themselves through higher education and struggled to represent the people in politics.

Understanding the varied background of political representatives in Turkey and the dynamics of the eras in which they served, certainly sheds some light on the internal dynamics of the country. For years, the privileged elite controlled the country. There was a hiatus in the middle of last century, with Menderes and Bayar. Men of the people, not the elite, had taken firm control of the political institutions of the country, and represented what the people wanted. The power of the people, represented by the Demokrat Parti, was wrenched from their hands by a military coup. The representatives of the people were imprisoned and executed, or imprisoned to be pardoned later. The remaining years of the century were dominated by people who came from or represented the very small and insulated elite of Turkey. The status quo had been restored.

Since 2002 the demands of the people are once again being represented in the political system. But now we see that Europe has decided to take sides in the struggle. As said above, perhaps the Europeans are doing this just to drum up support for their local politics. But perhaps the privileged of the West are reaching out to protect the privileged of Turkey, to stem the tide of real democracy, of true representation; to put the reins of power back in the hand of an elite that is cut off from the people.
RELATED TOPICS