Setting the stage for a 'Western' international coup 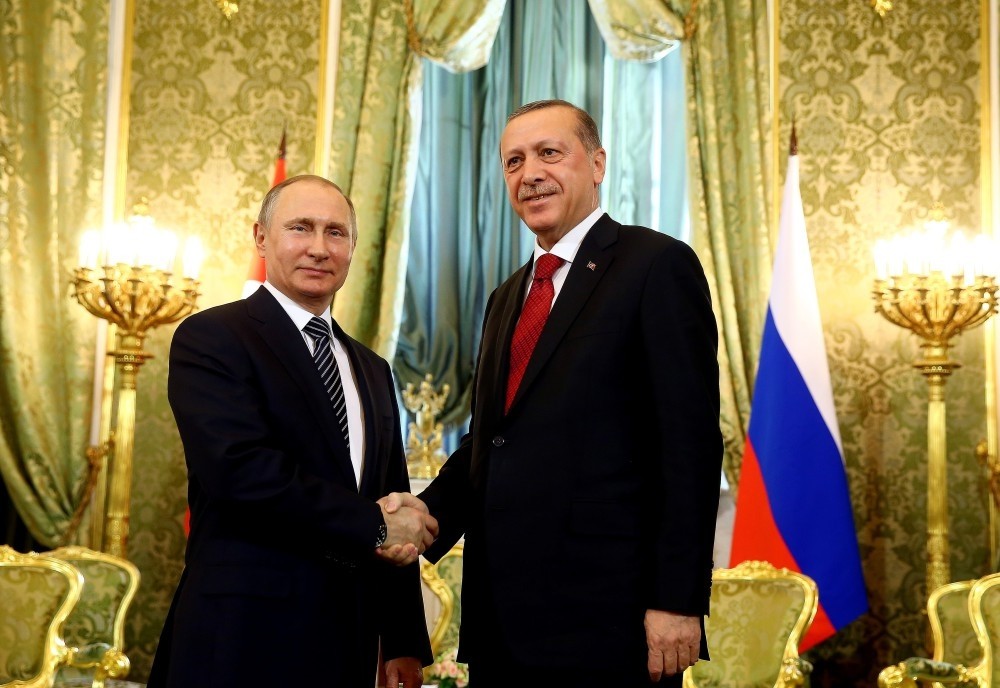 Putin (L) & Erdou011fan pose for press during Erdou011fanu2019s March 10 Russia visit. Although relationship between Turkey & Russia was tense after downed Russian jet, Putin reassured Erdou011fan Russia was on Turkeyu2019s side against coup plotters, mending relations.
by Fatima Abushanab Mar 21, 2017 12:00 am

As Turkey and Russia mend and enhance their relationship, it is obvious that third parties are trying to create a rift between the two with the downed jet crisis and the assassination of a Russian diplomat in Ankara. Fearing the partnership of Turkey and Russia, the Europeans have turned their backs on Turkey instead of working together to create a stronger partnership

President Recep Tayyip Erdoğan's trip to Russia on March 10 marked an important point for the cooperation between the two countries. After the downed jet and the ensuing assassination of Ambassador Andrei Karlov, it would have been thought that tensions between Russia and Turkey would escalate to a point where relations could be extremely tenuous. But that was not the case.

Turkey endured a coup attempt in July. Interestingly, the responses of support Turkey received immediately following this tragic terror attack saw the absence of many key Western countries, the champions of Democracy, and surprisingly the presence of other allies. Putin was among the first leaders who called President Erdoğan to give his condolences and full support to the Turkish people after the bloody coup attempt failed on July 15. With the reaffirmation that Russia was on the side of Turkey against the coup plotters, Turkish-Russian relations began to be rekindled.

Yet a few months down the road a series of "assassinations" of Russian diplomats around the world began to raise eyebrows. The "suspicious deaths" of six Russian diplomats in Ankara, New York, Moscow, Athens and New Delhi point to the fact that someone is out to get the Russians. But the question is whether Russia is the only target?

For some this may go unnoticed, but the reality is these assassinations did not occur out of the blue. And the timing of these "deaths" is not a coincidence, since they ensued a few months after Turkey's failed coup attempt, so specifically in the period where Turkey and Russia had strengthened their partnership. One cannot overlook the clearness of the pattern, but at the same time we cannot help but notice the open challenge of "some parties" attempting to daunt both Turkey and Russia.

Looking at the issues from another perspective begs the question of what the West will lose out on if Turkey enhances its relations with Russia. This is a critical question because the uneasiness of Western counterparts toward Turkey's increased proximity to the Russians is being felt strongly. The hatred campaign across Europe, especially from Germany, Holland, Austria and France, is a clear stance against Turkey's strategic moves in the international system. What exactly does that mean? Turkey's will for further democratic reform, the pursuit to become a leader in the Middle East and on the world stage as well as the strong ties it has with the Turkish diaspora across Europe frustrates some Western leaders.

Yet, instead of winning Turkey onto the side of the West, most Europeans have instead chosen to "bully" Turkey and ostracize a democratically advanced Muslim country. Their Islamophobia is embodied in their attacks on Erdoğan's Turkey. Undoubtedly, this type of discrimination, based on religion and race, molded in the shape of Islamophobia is going to backfire immeasurably. The problem dates back to the past three or four years, when Western governments decided that Turkey was advancing too fast and being too vocal. Therefore, it was time to shun Turkey, by bullying it as if it were "backward and authoritarian."

The truth about Turkey-Western relations is couched in the reality of betrayal. Turkey never turned its back on the West. The West turned its back on Turkey when it realized that its dynamic ally was overstepping its boundaries by challenging international injustice.

In an anarchic international system where the Western liberal order dominates, there is a rulebook expected for weaker states to abide by. Turkey, no longer weak or marginalized, defied the rulebook due to the exploitation of weaker states by the bigger countries bullying others in the international arena.

The mistreatment of Turkish ministers in Europe right before the vote for the referendum is clear proof of the narrow-minded and undiplomatic injustice Western leaders are showing. For any state to condone such action to a political counterpart means nothing less than waging an open political war. In other words, the Europeans are saying, "We do not respect you and therefore, we will not give you the freedom to travel and speak as you wish."

This kind of attitude not only hurts the legitimacy of European states with their "unprecedented illegal" behavior, but it also creates an atmosphere of hostility between European governments and the Turkish and Muslim citizens living in their respective countries.

Turkish-Europeans, despite their heritage and history of being tied to the great nation of Turkey, will at the same time always identify as Europeans. They are European due to their contributions economically, culturally and politically. Their children, grandchildren and great-grand children are born and raised in Europe where they received their education. Their perception of culture is shaped in combination of Turkish and European values of democracy and politics. They have more in common than in contrast, unlike what some enemies of inter-civilization cooperation falsely claim.

The war being waged against Turkey is one that views Turkey as the "other;" the enemy that purportedly does not belong to Europe. The presence of Turks in Europe is being used as an excuse to fuel hatred and discrimination against a nation whose roots are tied to a multi-civilizational history that also includes Europe.

No matter how many discriminatory politicians and state leaders across Europe try to deny Turkey's place within Europe, whether as a member of the EU or not, it will always carry the most esteemed values of freedoms and democracy. Turkey will continue to uphold these values, despite those who wreck these principles due to their blinded egoistic prejudices.

Turkey's referendum on April 16 will mark a new beginning. It will be a precursor to the many successes that will come here at home and abroad in places where Muslim identities are rejected. While some, like Russia, see a strategic partner in Turkey, so as to advance economic and political relations and resolve issues on terror, trade and energy, our European counterparts will, in contrast, need to come to terms with accepting Turkey as a Muslim partner that cannot be sacrificed.

Sooner or later this will be understood. Until then, Western states have some ruminating to do in order to acknowledge Turkey as a critical country that is too risky to lose.
RELATED TOPICS