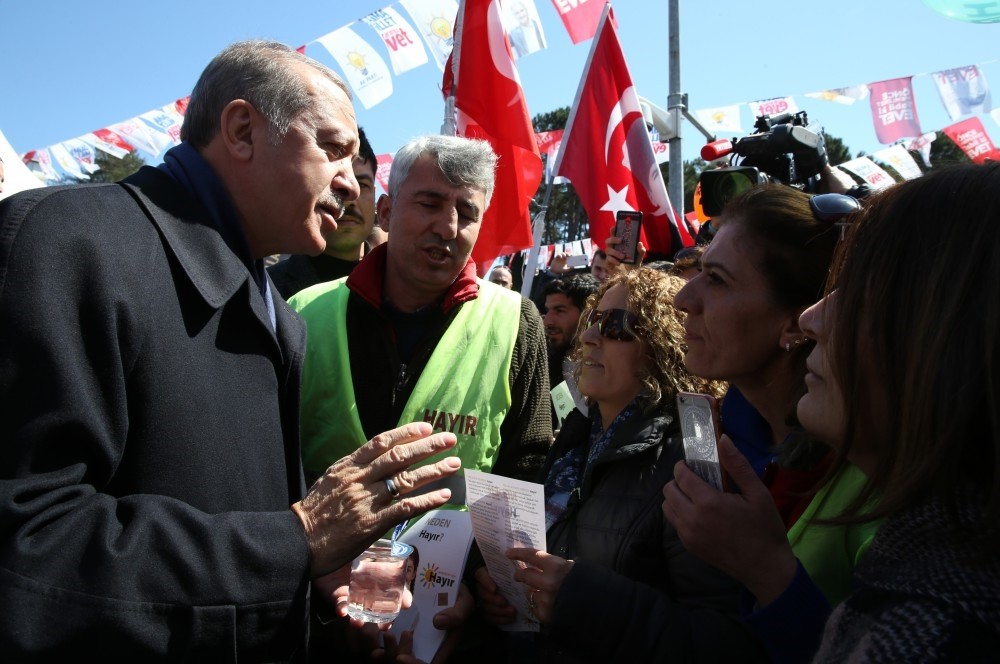 Last week President Erdoğan was on his way to the airport. He stopped to greet the people working in a ‘yes' pavilion. Then he went across to the ‘no' pavilion and visited the people there

As part of the Turkish referendum campaign, countless pavilions have been set up throughout Istanbul. A large number of them are "yes" pavilions, providing information to passersby about the positive aspects of the constitutional reforms and about what changes will be brought about. Then there are a smaller number of "no" pavilions, set up to provide information to Istanbul residents about what dangers are perceived by the "no" campaign in the constitutional changes.

The other day the president of Turkey, Recep Tayyip Erdoğan, was being driven to the airport. He asked to stop at a "yes" pavilion to talk with the volunteers working there. After talking with the "yes" campaigners, he started to head out of the tent.

Apparently, the campaigners at the "no" pavilion, standing opposite the "yes" pavilion, offered the president tea, which he declined, saying that he did not have much time. But he did accept a glass of water, and started to talk with the people there. In fact, he spent about 15 minutes in the "no" pavilion.

Some of what happened in the tent we can learn from the camera that was stationed there, the rest was related by the president himself.

President Erdoğan said he asked them why they wanted to vote "no." The film tells us that one person asked why the Yavuz Sultan Selim Bridge was given that name. Yavuz Sultan Selim was the sultan who fought against, and defeated, the Safavid dynasty in the battle of Chaldiran. For some Alawite citizens of Turkey this is a problem because the Safavid dynasty was a Shiite dynasty.

The president answered that under Yavuz Sultan Selim the Ottoman territory expanded to 18 million square meters. Should such a sultan not be honored? Why did they feel a need to bring sectarian politics into the matter?

The Dersim massacre occurred in 1937 when there was a Zaza rebellion against the Turkish government. The leader of the rebellion, Seyid Riza, was an Alawite leader. Thousands of Alawite Zazas died as a result of the violent campaign launched by the Turkish government. In 2011 President Erdoğan said this was one of the most tragic events in recent Turkish history. But the leader of the CHP did not condemn this event. He did not even mention it.

One woman piped up that she was going to vote no because she did not believe that there were enough rights or freedom for women. The president answered that under the AK Party government more women had entered the parliament than ever before. The record for this session of parliament is 82 women. In fact, the woman who was voting "no," that is a woman from CHP, should consider the following fact: While the AK Party sent in 32 women, the CHP sent in only 21.

Another person in the "no" tent claimed that she was going to vote no because she wanted to "live in a çağdaş Turkey." Çağdaş is a word that can be translated as modern, but is closer in meaning to contemporary. But when used in the context of that day, the word is loaded with a great number of rather nasty nuances.

The president played the game, and ignoring the nuances, asked what was not modern about the Turkey in which we live. What was this woman missing? Good roads, new bridges, a fast train? He could have gone on. Free health care, free education, an increase in car ownership. In fact, the number of vehicles on the road has increased 81 percent since 2000.

Was she talking about rights? Freedoms? There she was, campaigning against the president, freely criticizing him to his face. True, there is a state of emergency. People affiliated with terrorist activities are expected to answer for such affiliation. But the average person has freedom to express their opinions, even directly to the president's face.

But there is still a minority that wants to see the majority disappear again. To retreat back into their homes, and not come out until they look and act "çağdaş." This, perhaps, may seem like an overstatement of the case. But ask any woman who lived through the 90s with a headscarf, and she will tell you what a sinister, loaded word çağdaş is. It is a word that was hurled as an accusation – one was never çağdaş enough.

It is time that we put this word behind us. If we want to be truly modern, we should eliminate the word çağdaş because of its sinister overtones. We should be modern enough to accept that those who are devout Muslims, Christians or Jews should be able to live side by side with those who do not want to believe actively, or those who do not even believe. The Turkey that we live in today is one that respects the right to believe and practice as one wishes. This is far more modern than any çağdaş world envisioned in a "no" pavilion.