Age of turning pages not over yet: Visit Istanbul's best libraries

Despite the public's waning interest in published books due to the expansion of online publishing and e-books, readers continue to visit local libraries primarily because of the ideal reading environment and unique resources that they provide

Historically rooted in the invention of the typewriter and the circulation of recorded information, libraries play a vital role in the process of developing, conserving and transferring cultural information, and providing the knowledge that is necessary for the production of intellectual, artistic, scientific and technical products that constitute the unity of emotion, philosophy and value in society.

According to various sources, the history of Turkey's libraries dates back 900 years, with the first libraries being established in ancient Anatolia during the era of the Beyliks and later the Anatolian Seljuks, then further developed by the Ottomans.

Libraries in Turkey served as a vital part of the mosques, madrasas and foundations of the Ottoman Empire. In terms of independent libraries, Köprülü Fazıl Ahmet Pasha established the first library to be founded through donations in Istanbul in 1678, known as the Köprülü Library.

During the Republican period, the study of library science became increasingly common, with those who received training abroad becoming the founders of contemporary library science in Turkey. After 1954, library science departments opened in universities across the country, offering undergraduate and postgraduate education in the field.

Even though the spread of internet publishing seems to have reduced interest in libraries today, libraries operating throughout Istanbul continue to be filled with readers. Libraries offer various cultural and artistic activities as well as chats and panels throughout the year, allowing students to study more efficiently, as well as offering book lovers a wide variety of reading materials and giving writers a cozy, quiet environment.

The Beyazıt State Library, the first library established by the Ottoman state during the era, was founded in 1884 as "Kütüphane-i Osmaniye."

Opening for service with a set of "Naima History" books on its shelves, this library quickly filled with books brought from the Beyazıt Mosque, collected from around, purchased and donated.

The number of works in the Beyazıt State Library, one of the most important libraries in Turkey, which does not have a membership system, exceeds 1 million, and the average number of daily visitors is over 500.

The Orhan Kemal City Public Library, one of the libraries that students are particularly interested in, is located on Fatih Beyazıt Ordu Street.

The Istanbul City Public Library, which was previously located in the building of the Fatih National Library, was moved to the Şimkeşhane building in 1981. The library, named after the author Orhan Kemal in 2001 with the approval of the Ministry of Culture, serves book lovers as a provincial public library.

According to 2016 data, there are 53,421 books in the library, including works that appeal to readers of all ages.

Its number of registered members has reached 13,025, the number of visitors is estimated at 276,381, and the number of books, magazines and materials borrowed by readers is 159,023.

In addition to accessing books and magazines, visitors show an intense interest in artistic and visual events held in the library.

The museum library, which was established by the Ministry of Culture and Tourism in the Parade Kiosk (Alay Köşkü) located in Gülhane Park in Istanbul's Fatih district, opened in 2011.

The museum library contains books by Turkish authors, novels about the ancient city and works by Nobel prize-winning authors and various famous authors in Turkish literature. Publications from the Translation and Publication Grant Program of Turkey (TEDA - subvention project for the publication of Turkish cultural, artistic and literary works in foreign languages), facsimiles of important literary works and periodicals on literature and art are also available to view here. The museum of authors' special objects can also be visited in the library.

On the second floor of the two-story building are the works of well-known writers from Istanbul, such as Yahya Kemal Beyatlı, Necip Fazıl Kısakürek, Nedim, Orhan Pamuk and Nazım Hikmet. 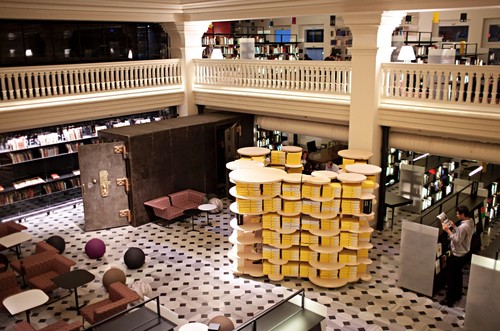 Open six days a week, the library provides its visitors with an archive of physical and digital documents and resources, along with a special library consisting mainly of visual practices, built environment, social life and economic history.

Written and visual documents and sources about post-1950 Turkish art history, the development of architecture and design in 20th-century Turkey and the transformation of society and geography from the last century of the Ottoman Empire to the 1990s Republic are open for online users' access at the website www.saltresearch.org. Publications, including books and magazines, can be viewed at the SALT Research Center in SALT Galata.

Also in the library, the Ferit F. Şahenk Hall provides free services with a registration system for postgraduate and doctoral students, academicians and independent researchers who want to benefit from the collections in SALT Research.

The library, which can be reserved for registered users, has 40 seats and a shelf capacity of 10,000 books.

Atatürk Library, one of the first libraries of the Republican era, serves book lovers in the district of Beyoğlu and provides a service to both the general public and private researchers under the management of the Istanbul Metropolitan Municipality Directorate of Libraries and Museums.

The library provides services in a wide range of categories for users of all ages from primary school-age to university level and from academicians to international researchers, containing close to 50,000 manuscripts, albums, atlases and maps, calendars, yearbooks, postcards, newspapers and books. Approximately 1 million pages, including the private collections in the library, have been transferred to the digital library, and the project is still ongoing.

There is also a book cover and repair workshop, an archive and conference and exhibition halls in the library, which has a capacity of 500,000 books.
RELATED TOPICS