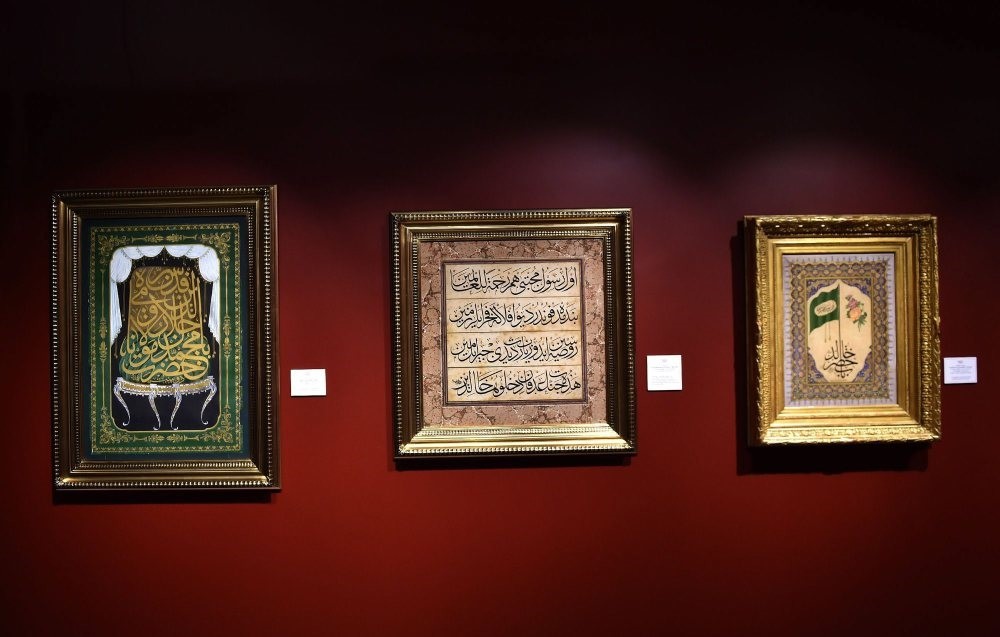 The works of calligraphy from the collection of Demet and Cengiz u00c7etindou011fan. Today, calligraphy plaques decorates the walls of museums in Turkey.
by Ekrem Buğra Ekinci Apr 07, 2017 12:00 am

Calligraphy, the art of writing, was more than just art that decorated the walls during the Ottoman times. The teachings and the names written in calligraphy were believed to protect the house

Plaques featuring beautiful handwriting in Arabic letters used to be hung on the walls of Ottoman houses to protect the house from danger and inspire the household. The writings on these plaques are called "hat" for calligraphy, while the artist who writes them is called a "hattat," calligraphist.

Since portraits and sculptures of humans and animals were prohibited in Islam, the empty spaces on the walls were filled with plaques of calligraphy. Their elegance brought a sense of aesthetics to the house. As the household looked at these plaques, they thought of the meaning of the writing, and drew a lesson from it.

The names of the formidable figures that people loved and respected were also written in beautiful letters and made into plaques, which would serve as a reminder of that person. In places of worship, hanging plaques with the names of Abu Bakr, Umar, Othman and Ali, the Prophet Mohammad's closest friends and successors as caliphs after his death, and also his grandsons Hasan and Hussein, besides the names of Allah and the Prophet Muhammad's own name, has long been a Muslim tradition and seen as a symbol of the Sunni belief.

Fire and earthquake were two great enemies of houses in Ottoman times. On the outside wall of the house, people wrote "Ya Haafez"" and took shelter in the protection of one of Allah's names, meaning the "protector." The then British ambassador in Istanbul once asked the Grand Vizier Fuad Pasha for the meaning of the writing on the walls and he replied with his usual humor by describing the calligraphy on the wall as, "Ottoman Insurance Company policies." Upon this answer, the British ambassador replied by saying, "It must be a company with a high turnover, because I see them on all the houses."

Kılıçzade Hakkı, a deputy of the Young Turks, who seized power after 1908, must have been inspired by this anecdote, saying that insurance policies should be hung instead of the plaques, which kept people from performing economic initiatives in his opinion.

The Ottoman house had a soul that spread to each corner. The most important symbols of this were the plaques on the wall. These were the examples of how the interior architecture of the old houses affected the patterns of behavior of the people and society. These were not just decorations, but they inspired a sense of meaning and messages to people. They were a spiritual connection between the household and the house.

At the time of the Umayyad and Abbasid Empires, calligraphy started to be hung in mosques. The names of the first four caliphs were also hung in this period in order to show that they were separate from the Shiites. Seljuks and Ottomans continued this tradition. This beautiful writing was written on china and marble, and finally on leather and cardboard. The plaques could be found not only in the mosques but also in tombs, tekkes and madrasas. While it was possible to encounter plaques suitable for Sufism in the tekkes, there were also plaques telling the virtue of "ilm" (knowledge) in the madrasas.

The plaques hung on the walls of houses were mostly related to the inner world of the landlord. These were the Quranic verses from which he received a doctrine for life, the sayings of the Prophet Mohammed, a saying of a religious figure or a piece of didactic poetry. The members of Sufism hung the names of the sheikhs, looked at it from time to time and remembered them. The names of friends and family members of the Prophet Mohammad surely found their places on the wall.

The plaques on which these remarkable sayings and names were written were not only written by calligraphers. Young girls also worked on the atlas with gold or silver threads. In homes, verses admonishing against pride from property, reminding about death, and celebrating good deeds, used to be preferred. Some texts were written as inanimate pictures like a turban or boat. The lines written in the form of portraits such as storks or those written from both left and right were not approved by the scholars.

Especially at the entrance of every house, "hilya," which tells the beauty of the Prophet Mohammed's appearance and character, were hung. It was believed it protected the house and its interior from all sorts of dangers. Like all the plaques, their edges were also decorated with gilding in the form of flowery ornaments. In the shops, there was a prayer called "Ant Prayer" for blessings and prosperity. Ants are renowned for their hard work. In the bedrooms, the names of Ashab al-Kahf (Seven Sleepers) were hung in order to protect children and give them a comfortable sleep. These were the seven young men who suffered from the hands of the cruel Roman ruler for believing in Jesus, took shelter in a cave with their dogs, and slept there for 300 years, by some miracle.

Besides migrations, fires and earthquakes, the alphabet reform conducted by the Kemalists in 1928 was the death nail for the calligraphy plaques and the books written in old writing. Most of the plaques, which were elegant artworks and antiques, were collected from mosques, tombs and madrasas by the government and stored in warehouses. Most of them were wasted here. Some were burned in the square. People also destroyed the old plaques that they had out of fear or disposed of them in some way. So, an enormous inheritance was destroyed.

To decorate houses in the modern age, either family photographs or European oil paintings, or even their bad copies, are now hung on the walls instead of these plaques. The characteristic of Turkish houses no longer exists. Some Europeans who understand the value of calligraphy today decorate the walls of their houses with beautiful plaques.
RELATED TOPICS