Running for their lives with starving babies on their back 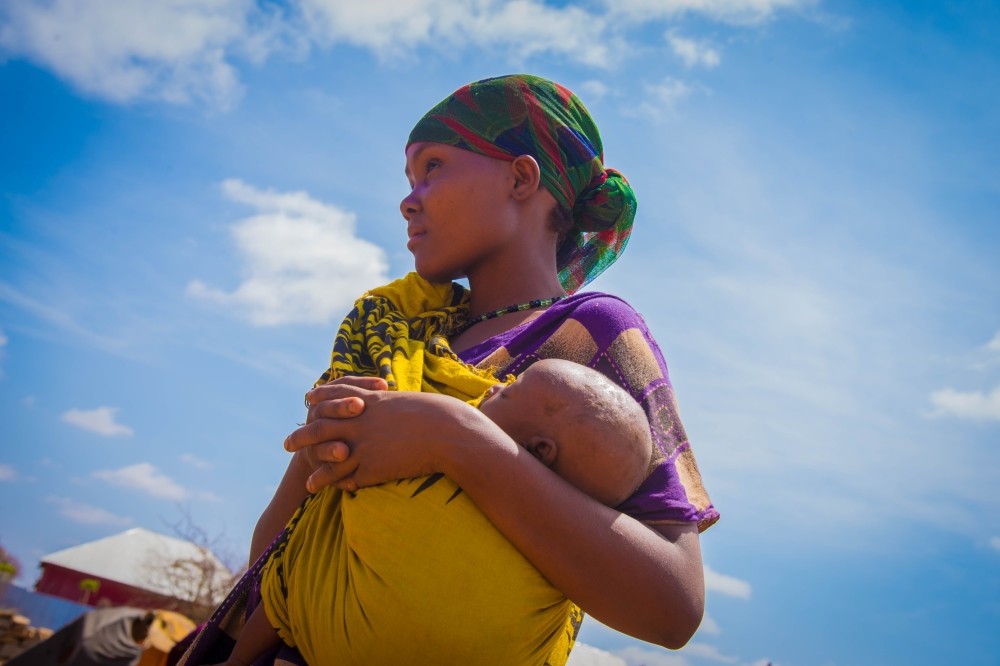 Like hundreds of thousands of Somalis, Medina Abdimanurshego, 22, are looking to find a safe haven where they can provide their children with food, clean water and basic humanitarian needs. (Yunus Paksoy/Daily Sabah)
by Yunus Paksoy Apr 10, 2017 12:00 am

Losing a husband is unbearable enough. Watching your husband starve to death in the middle of a vast desert under the scorching sun, though, is an entirely different story.

For thousands of parents whose families are on the brink of starvation in Qoryoley, Somalia, there are only two options on the table: Watch your children starve before your very eyes or walk barefoot for days to find a tiny morsel of food that barely fills the stomachs of your loved ones. For Amina Sharif Muhammad, 20, making that choice was a terrifying one. At the same time, hunger was gnawing away at her family.

Her husband, Osman Hussain Muhammad, 25, was daring enough to take the chance for the sake of their children. The Muhammads and their four children, who had barely had anything to eat, walked non-stop for three nights and days.

On an endless and barren road to the capital city of Mogadishu, all that the Muhammad family could find to eat were leaves and bushes. "Osman sacrificed from himself. Whatever he could find he gave to the children," Amina recalled.

Osman's weak body, which had received no nourishment for days, could no longer resist any more exposure to the elements on a boiling day. "He died along the way," his wife sighed with teary eyes.

An unprecedented wave of famine is spreading across Somalia. Millions of Somalis are affected by famine, civil war and drought. If the global community looks on for a little while more, tens of thousands of malnourished children as well as adults may die in the very near future.

"My heart is burning. I am torn up over the death of my husband," Amina said, "But, I am fighting to survive for my children."

Amina now lives in a tent camp near Mogadishu under squalid conditions. As I took a peek into her tent, which measures a few square meters, crying children with no clothes to wear represent the bitter truth about the current state of the people of Somalia.

The burden of being a mother weighs heavily on many around the world. For Somali mothers, however, the task is impossibly difficult. Ilham Hassan, a mother of three at the age of 21, shares the same fate as Amina.

The 21-year-old walked four days until she found a place near Mogadishu where she could set up a tent. "I was shivering with fear when I was unable to find food for my children," Ilham said, knowing that she had to leave. "I was left with no other choice."

Whether or not millions of Somalis will survive depends on humanitarian aid from around the world. U.N. Secretary General Antonio Guterres said last month that an urgent amount of $4.4 billion is being requested for famine relief in Africa, especially in South Sudan, Nigeria, Yemen and Somalia.

"We are facing a tragedy," Guterres said. "We must avoid it becoming a catastrophe." Children's monitoring agency UNICEF warned that almost 1.4 million children are at "imminent risk of death" from acute malnutrition this year in the four countries. Ilham's children are just the three of them.

Wandering around the tent camp near Mogadishu, anxious eyes followed my steps. Holding empty cooking pots in their hands, little children expressed their hunger as their mothers remained silent, looking down at the ground.

The humanitarian tragedy worsens as one travels into the country. I flew from the capital to Baidoa on a 45-minute flight. The sun was boiling hot and the town has not seen a drop of rain for months.

Driving through the town center I arrived at another camp for internally displaced people (IDP). In this camp of around 2,000 people I came across Anissa Hussain, 25, holding her baby tight in her arms. The sun was too hot to bear and Anissa was trying to cover her baby's head with her hijab.

Anissa and her husband had been earning their living through farming. The business was doing okay until the drought. "It has not rained for 15 months straight," Anissa recalled, adding: "We could not find anything to eat during the drought."

Her cattle were the first to starve to death. "Then, some of our relatives died of hunger," she said, looking helpless with the very same eyes that had watched her closest relatives die slowly.

The 25-year-old joined thousands in their march toward finding a glimpse of hope for food. Life carries on in a tiny tent for Anissa and her children. The husband was away, pursuing opportunities to feed the children.

Lack of clean water leads to serious diseases in Somalia. Diarrhea and fever have crippled the lives of many due to drinking contaminated water. In Baidoa, people form long lines in front of water tanks to filltheir plastic cans loaded onto donkeys.

Humanitarian aid organizations are making efforts to quench the thirst for water. However, the efforts fall short of the massive demand.

Even though Amina said she had four children, one was missing. "My youngest [child] has been ill since the morning. I am trying to keep him alive with a medicine that a doctor gave him at the hospital. He has a very high fever," she explained.

Medina Abdimanurshego, 22, appeared to be exhausted, carrying her baby on her shoulder between the tents. Medina responded to questions by murmuring words. She spent three days walking on the roads with her two children as well.

One could have a variety of fears ranging from failing in exams or being late to crucial meetings to missing flights. In Somalia however, women fear not finding enough food for their children. Medina feels the fear deep in her heart. "I am very scared that I will not be able to find food for my children," Medina admitted.

Like Amina, Medina watched her baby fall ill due to the lack of food. "My child got sick because she could not eat anything. She could only drink drops of water," she said, - "I can breastfeed the other."- Breast-feeding does not fill the baby either as Medina is malnourished.

Recalling her memories on the difficult journey to Baidoa from Buurhakaba, Medina said all she could think about was how she would be able to help her children survive in such fatal conditions.

Despite the horrors they have endured recently, the mothers achieve a bitter smile on their faces. Their identical fates do not reflect an astonishing coincidence. Thousands of mothers go through the same agony in and around Somalia. In fact, the mortality rate among these women in the country is highly likely to skyrocket if the necessary steps are not taken swiftly.