Recycling glass and paper in pursuit of a sustainable life 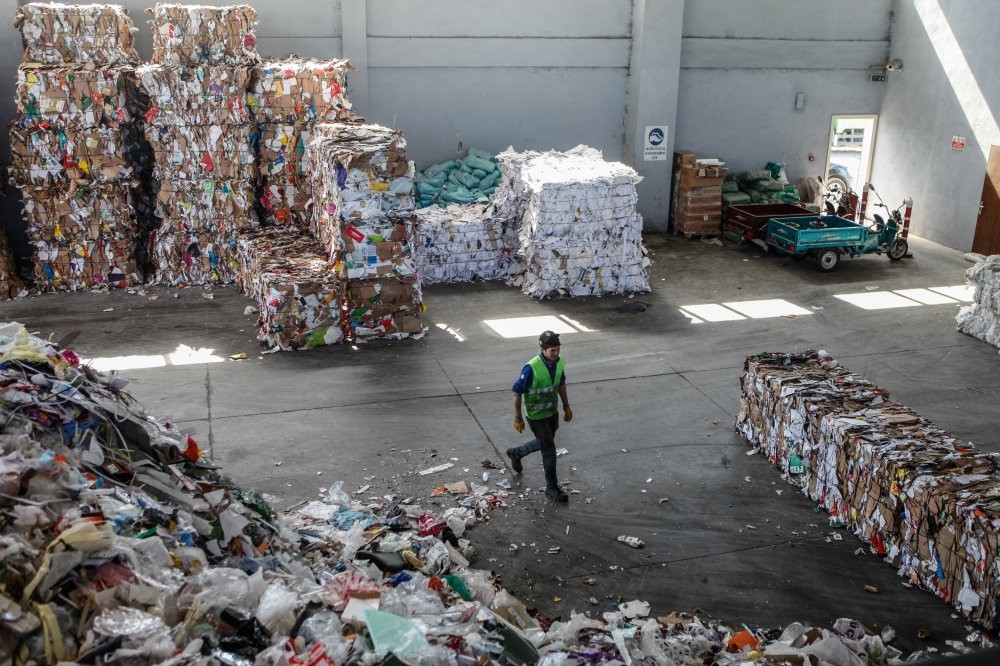 Recycling is the first step toward a sustainable life and has become a rising trend around the world. While tons of waste glass and paper are recycled everyday in Istanbul, Turkey still has a long way to go in becoming ‘green'

The recycling of waste is important for preserving our environment and boosting the economy. In Istanbul, containers for glass bottles and paper boxes are emptied regularly every day to help ensure this. But public awareness is still relatively low compared to other countries where public recycling systems are more commonplace. Glass bottles have a life of 4,000 years in nature, plastic takes 1,000 years to decompose and aluminum takes 10 to 100 years. Chewing gum, on the other hand, stays around for five years, and cigarette filters for two years. When it comes to paper, 17 trees are cut down for a single ton, which later takes up to three months to decompose when discarded as litter. Recycling is also important in this regard, economic reasons aside.

We observed the process of recycling waste materials by following the journey of bottles and papers.

Put it in the bin, recycle forever!

It is 10 a.m. and we are next to Kirazlı metro station in Istanbul's Bağcılar district. The recycling bin for glass is full; we throw a bottle in and wait. The garbage truck arrives. The team places the hook of a crane into the bin. We are here with Özen Glass Recycling general manager Eylem Öztürk, who works with 33 municipalities in Istanbul. "On average, 600 kilograms of bottles come out of a bin. Between 3,500 and 4,000 tons of glass bottles are collected in Istanbul every month. Bağcılar leads the way in glass bottle recycling, followed by Kadıköy and Ataşehir," says Özen. "Our slogan is, 'Put glass bottles in the bin, recycle them forever!'"

Mehmet Nesip Bozkurt (47) is the driver of the glass waste collection vehicle. His shift starts at 8:30 a.m. and Bozkurt says that the vehicles make routine controls region by region, noting that more glass is collected from high-income districts. Bozkurt receives a tip from a citizen that one of the glass boxes is full and turns to his collection vehicle with a sense of duty. We jump in the car to follow the tip together.

We move on to the Bağcılar Municipality Packing Waste Collection and Separation Facility near lunch time. After lunch, we go to the Özen Glass Recycling Plant in Başakşehir's Kayabaşı region via the glass collection vehicle. When we get to the facility, the driver pulls the vehicle onto the weighing bridge. After taking the receipt of 4,720 tons of glass from the computer, he removes the load and leaves the place with the satisfaction of finishing the job and going on another neighborhood round tomorrow. With the company's owner Mehmet Özen, we visit the facility to see how bottles are broken down. The bottles are separated by color: green and clear. The plant has manual sorting and automatic sorting sections and the bottles pass through a roller in the manual section where they are broken up before going up on the conveyor belt. Then any nylon inside the bottles is separated out by sifting.

On the conveyor belt

An automatic sorting machine costs about 200,000 euros. The process here is faster. The broken glass passes along the belt. After thousands of blows, stone, ceramic and foreign materials in the glass are separated by an optical separator. After a roughing down, it is thinned down further in a second optical separator. In the final check, hand-sorting comes into play.

Melting and the final stage

Roughly 150 tons of raw material are sent to Şişecam's factories in Bursa and Eskişehir daily. Şişecam Çevre Sistemleri A.Ş. Company manager Volkan Aydeniz says that the pieces of glass to become raw materials move to the melting stage to be reshaped into new "recycled" bottles.

As the conveyor progresses, a team of 25 people speeds up. Nuri Akbaba (48), one of the oldest in this profession, separates colored and white bags, for example. He says more paper, cardboard, nylon and pads come from the garbage. Regarding waste from households Akbaba says, "In winter, bottles and pads are scarcely found in the garbage, but there is always paper. As recycling containers became more widespread, the number of bottles recovered from garbage decreased. Paper should be thrown into the recycling bin, not into the garbage."

After all the material is separated and sifted, only cartons remain. Facility workers never touch the cardboard. They turn it into bales after pressing. A bale weighs a ton. There are three different kinds of paper that are pressed and baled: white, mixed and full cardboard. In a day, 60-70 tons of cardboard are recovered. Sometimes it can reach 150 tons. White paper, mixed paper and cartons are placed in different trucks and shipped to different plants. In the plant, a machine mixes baled papers with water and chemicals. Once it forms a dough, it is compressed and dried in rolls and again turned into paper. After being made into usable form, it is sold on the market as recycled paper.

Do not throw away paper!

Paper recycling has great prospects for both the environment and economy. We start from a paper recycling container in Bağcılar to observe this. Putting some paper into the container, we look forward to its collection to start our observation. When the vehicle arrives, two cleaning workers open the bin and put the paper and cardboard into the vehicle by hand. The paper is taken to the Bağcılar Municipality Packaging Waste Collection and Separation Facility by the collection vehicles.

Adem Demirkurt (48), who has been working at the recycling plant for 17 years, welcomes us. Waste paper, cardboard and garbage discharged here are placed by the team onto conveyor belts for processing. Once the incoming waste material has gone up the belt, the recycling really begins. Explaining the process in detail, Demirkurt says, "We do six types of sorting. Everybody has a separate job description. Some sort the white paper from the waste materials, some go after the sanitary pads, and some separate out the bottles and metal that come from the waste."
RELATED TOPICS