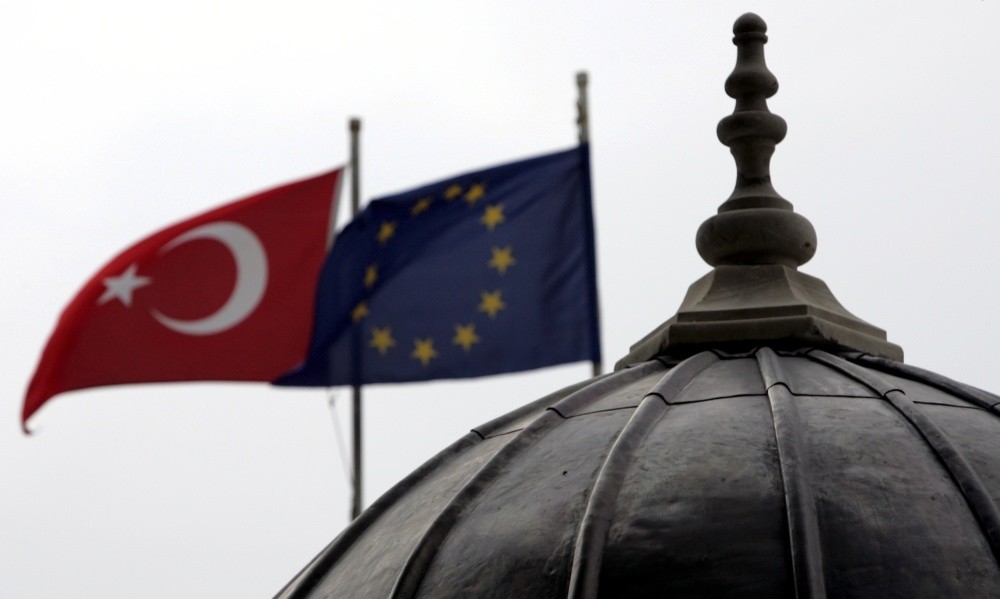 The Turkish and European Union flags waving side by side in Istanbul, where the minarets and domes of mosques and churches dominate the cityu2019s silhouette.
by Ayşe Şahin Apr 17, 2017 12:00 am

Turkey, a Republic established on secular and Islamic principles, has always been close to Europe and its values despite the EU's reluctance. However, it is time for European leaders to adopt Turkey's mild approach to Islam, prevent radical Islam at home

As a state established on both secular and Islamic principles, the Turkish Republic has kept its eyes on Europe since it was founded. The pro-European policies adopted under the founder of the Republic Mustafa Kemal Atatürk and the governments that ensued, remaining loyal to Atatürk's legacy with downright determination, resulted in the tight adherence to European values that culminated in the first two terms of the current ruling Justice and Development Party (AK Party).

The AK Party came up with various reforms to harmonize Turkish laws with those of Europe in pursuit of EU accession. To this end, the AK Party abolished capital punishment, addressed the Kurdish question, exerted efforts to mend past misdeeds against minorities and diminished the influence of military on the political sphere. However, all the efforts of the ruling party to breathe new life into democracy fell short of dispelling European reservations regarding Turkey, with Europe imposing more criterion in response each and every time, finally leading Turkish officials to question the EU's sincerity in its aims to admit Turkey into the bloc.

That epiphany marked the beginning of the deterioration of relations which declined to their lowest levels when Turkish officials were denied entry in the Netherlands where they had plans to address a Dutch-Turkish rally ahead of Turkey's April 16 referendum regarding the governmental shift to a presidential system. Germany supported a move to bar the entry of officials, which altogether engendered a serious diplomatic crisis between the long-standing NATO allies.

The souring atmosphere caused certain setbacks in the duo's joint efforts to fight terrorism, which had reared its ugly head in the form of intelligence sharing, deporting suspected militants that sought to join the ranks of Daesh while enhancing security at the borders. The crisis also came at a time when broad cooperation between Turkey and the EU was most needed in the face of the global terror threat.

When the terror threat emanating from the chaos in the Middle East intensified, nearly penetrating the European continent; many wondered how European politicians would respond to the thousands of refugees that swarmed the continent and the problems that ensued; namely, the ascent of the far right and growing xenophobia that now sits on the brink of racism. What initially appeared as a reaction to refugees swarming the continent quickly morphed into an anti-Islam movement that now targets Muslims who are European citizens, have been living there since birth as well as those who are integrated into European society and venerate European values.

At the onset of the crisis, Europe was cautious not to offend its Muslim population.In official statements, the authorities delivered robust warnings to the citizens to refrain from associating Islam with terrorism, echoing their fight was against "terrorism" but not "Islam." But, as tensions escalated with terrorist attacks carried out by Daesh occurring one after another, officials gradually let go of prudent rhetoric and edged away from the commonsense response to terrorism. Europe was plunged into limbo where it had to make a decision between either embracing the Muslims it hosts or adopting protectionist, isolationist policies to overcome the crisis. This ambivalence that lasted a while was interrupted with the opening of election season on the European continent. To conspicuously achieve electoral gains in the elections, European politicians, even from the moderate, democratic line, chose to cajole the visceral sentiments of the public against Islam, eliciting further Islamophobia directed at Muslims residing across Europe. They drove a wedge between Europe's Christian community and Muslims, ending a decades-long legacy of the two Abrahamic religions living together peacefully.

The Islamophobia provoked by far-right movements that is spreading across the continent is also making lives difficult for humble Turks who live in Europe and make up one of the biggest expat populations of Europe. Turkey's Religious Affairs Ministry has been carrying out its works diligently to protect European citizens of Turkish descent from facing such difficulties regarding their religious beliefs both inwardly and outwardly in Europe. If anything, Ministry officials believe that the way that Turks experience Islam should be propped up by European politicians, citing that the moderate way of living according to Islam can set an example for Muslims who are inclined to radicalization.

Mehmet Görmez, the head of Religious Affairs, said one significant purpose of the institution is to make sure Turks that live in Europe and Germany stay away from a "wrong understanding of religion" and religious interpretations that "include violence."

"We are responsible for protecting our mosques and our community [in Europe] from deviant thoughts like those of Daesh and al-Qaeda," Görmez said.

"The Religious Affairs Ministry has conveyed its service to Asia, Africa, North America, Latin America and most notably Europe in light of these principles. And, while carrying out its service, the Ministry has never been involved in any missionary activity whatsoever, nor has it deviated from moderation," Görmez further noted.

The offensive policies adopted by European politicians have also come under the criticism of the intellectual elite worldwide, who are taking a good, hard look at the way Europe is dealing with the crisis it currently grapples with, raising serious questions as to whether Europe is abiding by the values it valorises in its fight against "extremism."

"Extremism" in Islam, in the first place, is highly controversial terminology that varies in its interpretation. The terminology, "extremist Islamist" is frequently used by Western critics, writers and politicians to refer to potential terrorists and has been a matter of securitization in Western politics for years. However, most Turkish politicians from the right-wing political camp as well as Turkish clerics find such rhetoric unsettling, indicating that Islam is neither extremist nor moderate, saying Islam is merely Islam. Another handicap ridden in this terminology appears to be its vagueness.

"Extremists" have ended up in an all-out witch hunt and dozens of cases rife with human rights' violations were reported in the media. European hysteria has prompted irrational measures to avert "radicalism," including the closure of mosques, bans on ostentatious Islamic symbols such as the veil and the barring of refugees fleeing war zones in the Middle East, to name a few.

"There is no radicalism in Islam. Such notions are instilled in our minds by Western circles and we have begun to speak their language. The West, by blocking viable ways of solution to prevent radicalism is doing the greatest harm to itself. Instead of limiting the freedom of religion, the West should give space to Muslims to practice their faith. The more you constrain them, the more radicalized they might become," said academician Akif Ersoy.

Ersoy also noted that a close cooperation with Turkey, which he says is the most inclusive among pre-dominantly Muslim countries, would offer a good opportunity to impede radicalism in Europe.

"There is no sectarianism in Turkey," stressed Ersoy.

Enes Bayraklı, writer and an academic, said Turks living in Europe are the least prone to radicalization because Turks are adherents to the orthodox interpretation of Islam, unlike Wahhabism and Salafism, which are extreme interpretation of it.

"Islam itself is moderate in its nature and never promotes violence. Most Islamic scholars agree on this. And when you turn your back on a country representative of this 'middle way' you leave Europe vulnerable toward the influence of other extreme movements," he said.