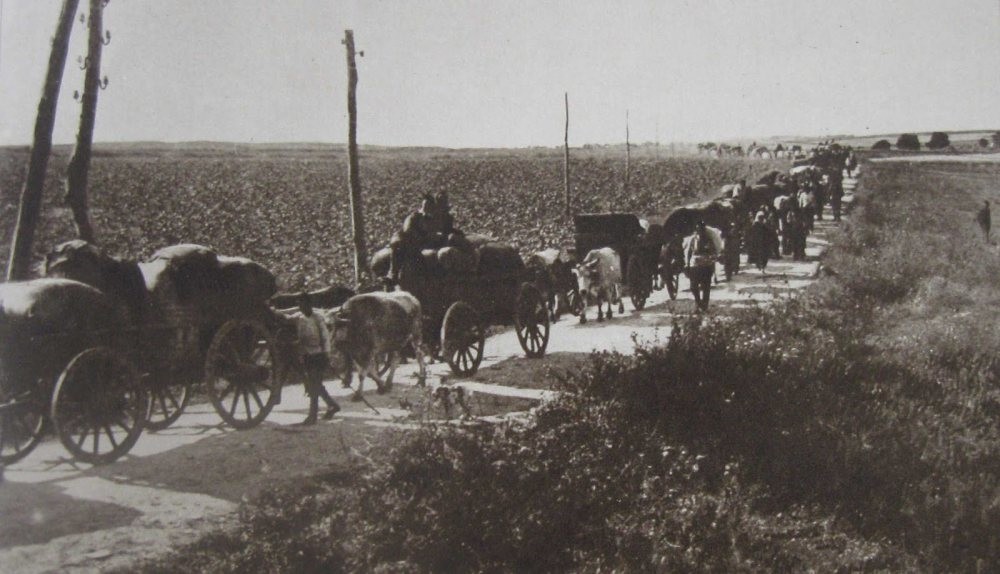 The Karamnlides traveling on their carts, leaving their homelands behind during the population exchange between Turkey and Greece.
by Ahmet Günhan Apr 18, 2017 12:00 am

The Karamanlides, who were an Orthodox Turkish community living in Anatolia, became the victims of national identity building that was on the rise in the Ottoman lands during the 19th century. Following the population exchange, the Karamanlides were forced to migrate to Greece, a land they do not belong to

Since the French Revolution, world history has witnessed numerous examples of nation-building processes. Each show their own variations based on ethnic, religious and historical standards. Nation building is generally a painful process. With the rise of nationalistic ideas, the Ottoman Empire suffered a lot, however, the Karamanlides were perhaps the ones who suffered the most.

The Karamanlides, also known as the Karamani people, were a Turkish-speaking Orthodox population in Anatolia during the rule of the Ottoman Empire. These people lived in Central Anatolia and some part of the Mediterranean coast. The region takes its name from Karamanoğlu Beylic, who reigned for a long time in central Anatolia. Although very few Karamanlides still live in Turkey today, the majority of the Karamanlides population were sent to Greece in 1923 as part of the population exchange agreement entered into force with the Lausanne Treaty.

The Turks and Greeks lived side by side for a very long time. There had been many cultural and historical transitions between the two nations. The population exchange was based on religion and regardless of their heritages, Christian Turks and Muslim Greeks were forced to migrate as well.

The Turkish nationalist identity in the Ottoman Empire was adopted by the Unionists soon after they came to power. They wanted to build a nationality movement based on religion rather than ethnicity and non-Muslim people who were of Turkish origin were not recognized as Turkish.

The term Karamani, or Karamanlides, was also used for all-Turkish speaking Orthodox Christians throughout the Ottoman territories like Syria, the Balkans, and Crimea. There are some disputes over the origin of the Karamanlides in Anatolia: Some authorities claim that the Karamanlides are the direct descendants of the Byzantine Greeks who underwent a Turkification process due to relationships with the Turks. According to the widespread view, the Karamanlides were the descendants of Turks who came to Anatolia before the Battle of Manzikert in 1071 from the Balkan Peninsular through the Byzantium Empire. Hence, it can be said that the Turkish presence in Anatolia goes way back.

Turks who came to Asia Minor after the Battle of Manzikert labeled all Orthodox Christian communities in Anatolia as "Rum" (Greek) meaning Roman, a term still used today. During the reigns of both the Seljuk and Ottoman empires, the subjects of the empires had not been labeled by their nationality but instead by their religion such as Muslim, Rum or Armenian. In time, the Karamanlides also started to call themselves "Rum" because of their religious identity. Here are the verses of a Karamanlides poet who tries to explain this duality: "Gerçi Rum isek de Rumca bilmez Türkçe söyleriz, Ne Türkçe yazar okuruz ne de Rumca söyleriz / Öyle bir mahludi hattı tarikatimiz vardır, HurufumuzYonanice Türkçe meram eyleriz." (Tough we are Greek, we do not know the Greek language and we speak Turkish. We do not write and read in Turkish, nor speak in Greek / Our alphabet is very mixed, our alphabet is Greek but we express our aims in Turkish.)

Evliya Çelebi, a 17th century Ottoman traveler, mentioned this community in his writings and claimed that they are of Turkish origin.

The Karamanlides were religiously affiliated to the Ecumenical Patriarchate of Constantinople. After World War I, some Anatolian Greeks supported the Greek occupation of Anatolia. The Ecumenical Patriarch of Constantinople and Meletius IV of Constantinople also supported Greece. However, most of the Karamanlides sided with Ankara. The Turkish Orthodox Community of Anatolia protested the Patriarch of Constantinople. In 1922, the Autocephalous Orthodox Patriarchate of Anatolia was founded in Kayseri by Father Pavlos Karahisarithis with 72 orthodox clerics. Karahisarithis took the name Pope Eftim I. Karahisarithis participated in the first the National Grand Assembly in Ankara, and he was one of the clerics who prayed during the opening ceremony of the National Assembly. However, after the exchange of the population in 1923, the patriarchate lost most of its community. Following the population exchange imposed by the Lausanne Treaty, almost 200,000 Karamanlides were sent to Greece in spite of the fact that they only spoke Turkish and they were of Turkish origin. Some of them managed to stay in their homeland, Anatolia, and continue to live in Turkey until this day, while the vast majority still live in Greece as well as in Western Europe and North America.

Carving out a more homogeneous nation was not an easy task, especially in the region with its mosaic of cultures characterized by hybridity. Moreover, most of the time, it can be a bit cruel. In order to create homogeneous nation states, national cultures require a national language, religion and history. After the Karamanlides migrated to Greece, they published a bilingual newspaper for a short time because of the homogenization policy of the Greek State. Due to the defeat in Asia Minor, public opinion in Greece was for an ethnically homogenous Greece. The Karamanlides were exposed to Greece's homogenization policy and some local Greeks labeled them "Tourkiki sporon" (Turkish seed). The first generation in Greece protected their identity and language but future generations started to speak Greek.
Last Update: Apr 18, 2017 1:11 am
RELATED TOPICS