Mosque destroyed during Bosnian War to be rebuilt with Turkish initiative 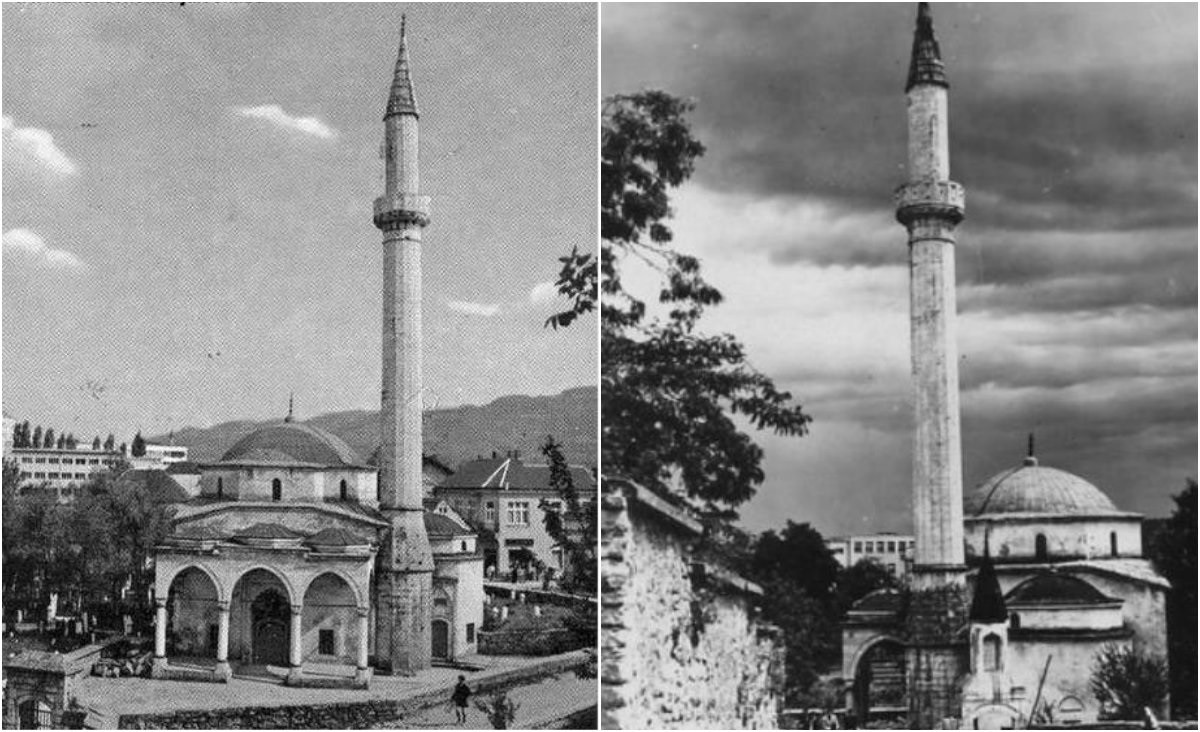 The Arnaudija Mosque, which was built in 1595 and destroyed by Serbian forces during the Bosnian War will be rebuilt, with help from Turkey. The work will begin with a ceremony on April 22

For some time now, Bosnia and Herzegovina has been reconstructing the religious buildings that were destroyed during the Bosnian War that took place between 1992 and 1995. The mosque and buildings are the signs of the common culture, history and memory shared by the Bosniaks and Turks that started with the conquest of Bosnia in 1463 by the Ottoman Empire. These mosques are also reminiscent of pillars that enable a cohabitation of different cultures, as mosques are not only open to Muslims but to all people from every religion and culture. 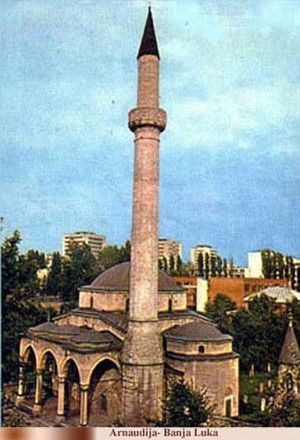 The Arnaudija Mosque is one of the 927 destroyed or damaged mosques in Bosnia. The mosque is located in Banja Luka, which is the second biggest city under the control of the Republika Srpska. The reconstruction project of the mosque was initiated by the Islamic Community, the organization representing Muslims in Banja Luka. The funds for financing the reconstruction are being provided by the Turkish Directorate General of Waqf Foundations.

The official ceremony of laying the foundation stone for the reconstruction of the Arnaudija Mosque is set to take place on April 22 in Banja Luka, as part of the seventh edition of the Days of Waqf in BiH Ceremony. The ceremony is to be overseen by Dr. Adnan Ertem, the director of the General Directorate of Waqf of the Republic of Turkey, his deputies and associates, and Haldun Koç, the ambassador of the Republic of Turkey in Bosnia and Herzegovina, along with a large number of the faithful as well as representatives of political and religious life in Bosnia and Herzegovina and the Republic of Turkey. 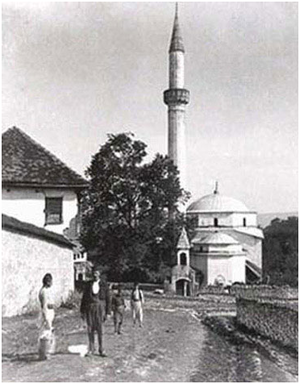 Prior to the ceremony, Senaid Zajimovic, the director of the Waqf Directorate Sarajevo, spoke to Daily Sabah about the historical importance of the Arnaudija Mosque for Bosnians and Turks and the process of the reconstruction of Islamic buildings in Bosnia and Herzegovina.

The story of the Arnaudija Mosques goes back to Ferhad Pasha Sokolovic, thr Sanjack-bey and the first Ottoman governor of Bosnia, who was a member of the Sokolovic (Sokullu) family known for their most famous member, Sokollu Mehmed Pasha, who was chief admiral and grand vizier during reigns of Suleiman the Magnificent, Selim II and Murat III for more than 14 years.

Zajimovic said Ferhad Pasha ordered Hasan Efendi, the provincial treasurer of the Bosnian state, to build a beautiful mosque, the Arnaudija within the frame of a previously signed waqf agreement in 1594-1595. Arnaudija is located in Donji Seher in Banja Luka close to the Ferhadija Mosque, which is in the city center. The origin of the name of the Arnaudija Mosque is believed to be Albanian.

Architect was the student of Mimar Sinan

Built in the classical Ottoman style, the Arnaudija Mosque shares architectural similarities with the Alaaddin Bey Mosque in Bursa (1326), the Hazı Ozbek Mosque in Iznik (1334), the Firuz Aga Mosque (1491) and the Yavuz Selim Mosque (1522) in Istanbul. Zajimaovic said that the architect of the Arnaudija Mosque is not a well-known figure, but he was a known student of the Ottoman court architect Mimar Sinan. Offering information on the architectural style of the mosque, Zajimaovic said that it bears the signatures of classical Ottoman architectural style. There was also a small fountain that served all residents in the region. The tombs of treasurer Hasan Efendi and his wife were also located in the courtyard of the mosque. The Arnaudija Mosque was included on UNESCO's World Heritage List along with the Ferhadija Mosque, which was also destroyed on the same day, May 7, 1993. Built in 1579, the Ferhadija Mosque reopened last year with a ceremony overseen by Bosnia's top leaders and Turkey's government representatives as well as around 8,000 visitors.

927 mosques destroyed or damaged during the war

During the Bosnian War, Muslim Bosniaks were exposed to genocide. The Serbian and Croatian forces led a destruction campaign to erase all traces of Islam in the country. A total of 307 mosques were completely destroyed and 620 mosques were damaged by Serbian or Croatian forces. The total number of Islamic buildings, including the Quranic schools and dervish lodges that were destroyed during the war, reached 4,190, according to "Islam and Bosnia" by the Israeli historian Maya Shatzmiller.

In Banja Luka, a total of 15 mosques destroyed by Serbian forces have been repaired, reopened, or are still under construction except for the Arnaudija Mosque, but that is now about to change.

Ottoman architectural techniques to be used

Zajimovic said that they aim to complete the reconstruction of the mosque in the next two years. He said the renovation process at the Arnaudija Mosque will be performed in the same manner as Ferhat Pasha's mosque since both mosques are similar in architectural style. As in the traditional Ottoman mosques, the correctly shaped blocks with a rustic finish and mortar with a high proportion of lime as a binder will be used during the reconstruction of the historic mosque. "Also, there is an interesting story that the builders mixed concrete with eggs to further strengthen the concrete," said Zajimovic. He said that for years concrete pieces of the demolished Arnaudija Mosque were patiently picked up and collected from garbage dumps around Banja Luka. "Many of the original remains were found and we will try as much as possible to incorporate them in their original places," he added.

Cooperation between Bosnia and Turkey

Zajimovic said that the General Directorate of Waqf of the Republic of Turkey has been present in Bosnia since 2011 and supported the waqfs (Ottoman-era foundations that undertook all kinds of public services) in the reconstruction and preservation of Islamic culture in Bosnia and Herzegovina.

Zajimovic said their goal is to restore and build other waqf objects on waqf lands such as the reconstruction of the Aladza Mosque in Foca, the Sinan Mosque in Cajnice, construction and equipping of the Students' House of the Faculty of Islamic Studies in Sarajevo, construction of residential and business premises in Sarajevo. Moreover, the construction of the waqf shopping center in Sanski Most, restoration Sarena (Alaca) Mosque in Travnik which is a unique architectural example, the Bascarsija Mosque in Sarajevo, the Behram-beg Mosque in Tuzla, the building of the old madrasa in Fojnica, the minaret and interior painting Ferhad-beg mosque in TeSanj, Isa-beg Hamam in Novi Pazar in Serbia and many others are planned to be built in Bosnia. All these projects are of crucial importance to the Islamic Community and country in general.

Zajimovic said that the reconstruction of the mosques made a significant contribution to the positive atmosphere in Banja Luka's social life. "Increasingly there is an understanding and mutual respect. Reconstruction of the Arnaudija Mosque is significant for Muslims and for the people of other religions," he said. Zajimovic added that these Bosnian monuments are not just a part of their common identity and that the common history and heritage of the Bosniaks and Turks will will push the two societies to build a place for all people to show signs of coexistence in Bosnia and Herzegovina.

Zajimovic said relations between Turkey and Bosnia and Herzegovina have always been good thanks to the presence of deep common historical and cultural connections. "For us it is very important to work on the preservation of historical, cultural, and humanitarian relations with Turkey to further strengthen the political and economic relations between the two countries," said Zajimovic. He claimed that Bosnia and Herzegovina admires each success that Turkey achieves because of their love for the Turkish people. "A strong Muslim country such as Turkey is very important and needed for us in Bosnia and Herzegovina," he concluded.