Ottoman humanitarian aid to the Irish gripped by famine 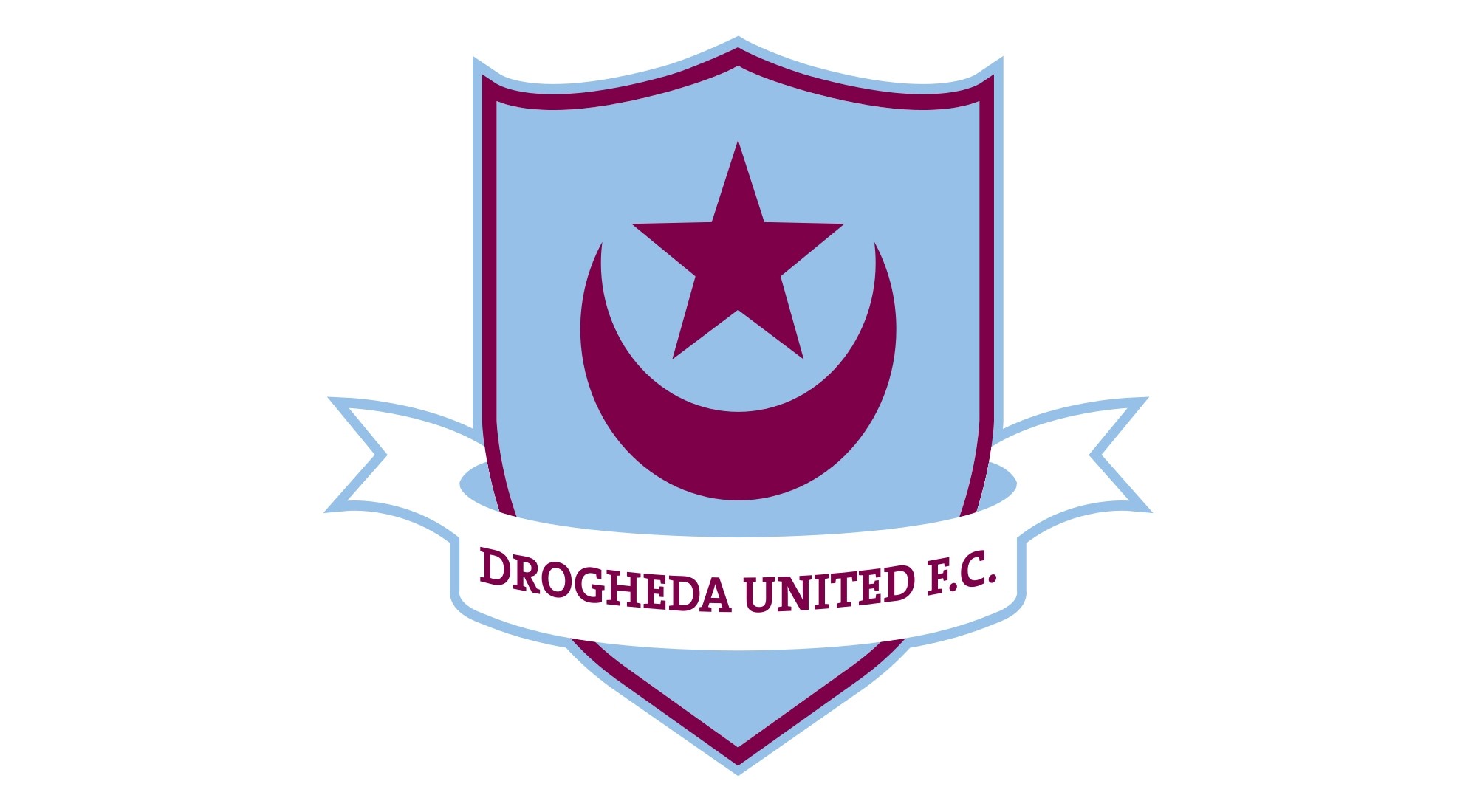 The embem of Drogheda United F.C. featuring a crescent and a star in apparent reference to Ottoman flag
by Ekrem Buğra Ekinci Apr 21, 2017 12:00 am

It may be surprising to see the star and crescent on the emblem of Irish football club Drogheda, but this emblem has a story dating back to the Irish famine of 1847

It is rumored that the Turkish poet and diplomat Yahya Kemal Beyatlı marveled at the support of an Irish delegate toward the Turkish delegation in comparison to the negative attitude displayed by the European delegates during the 1923 Lausanne Treaty negotiations. He later got the chance to ask the Irish delegate the reason behind his support. "Every Irishman like me is obliged to do it. We did not see any aid and support from other Europeans when we suffered from hunger and famine, struggling with death. But your ancestors sent us both money and ships of food. On this count, a large number of Irish people survived. We can never forget the humane hand reaching out to us in those tough days," the Irish delegate responded. 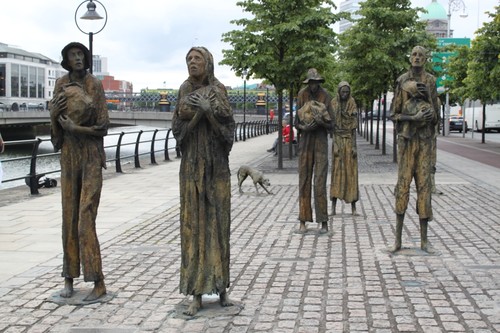 Famine Memorial in Dublin depicting the miseries of the Irish people during the Great Famine of 1847.​

In Ireland, where the majority of people were Catholic, all of the land was in the hands of about 10,000 British landlords, many of whom lived in Britain during those years. These holdings were rented to 600,000 Irish farmers. Since population density was high, rents were high, as well. Most of the crop was transported to England. In 1845, 1 million tons of grain and 258,000 sheep were exported to England. Small pieces of land were rented to workers for small wages. Up to 4 million farmers and workers were raising potatoes, which were the only food source for their livelihood.

In 1845, Ireland was suffering from a great famine, as were many European countries. The famine, also known as the Potato Famine, is one of the most important events in Irish history. The famine came out after the potatoes, the main food source in Ireland, were poisoned by a microscopic fungus called "phytophthora infestans," which was brought or came naturally from the Americas. Hence, a third of the crops were gone in 1845. This crop loss reached 90 percent in the following year.

The famine reached its peak in 1847, when the hungry Irish had to eat seeds to survive. The next year when imported seeds were used, half of the harvest was wasted. Although the famine ended in 1851, most of the Irish people either died or were forced to migrate to the United States. Thus, the population of 8 million was reduced to 5 million. The migrants never returned, but left sorrowful stories and memories behind. 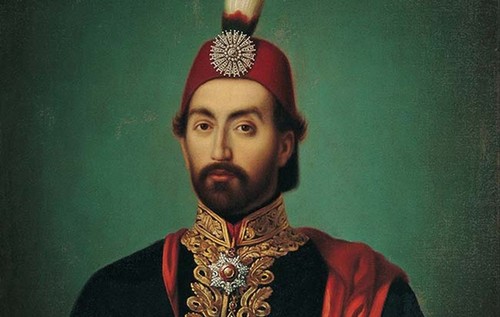 Even though he did not receive a request, the generous and benevolent Ottoman sultan Sultan Abdülmecid decided to send 10,000 pounds to Ireland as a donation. This was a gesture that earned the Ottomans a worldwide reputation for generosity.

Even though Great Britain was the richest country in the world at that time, Queen Victoria was less generous to her subjects, the Irish, than the Sultan, and only gave 2,000 pounds to an Ireland in the grip of famine. Moreover, in order to protect its reputation, London asked the Ottoman government to reduce the sum to 1,000 pounds. The sultan then sent three sailboats full of food, medicine and seeds in addition to 1,000 pounds.

At the time, Ireland was a colony of Great Britain. The British government did not allow the Ottoman aid vessels to dock near the port of Dublin. Then the vessels approached the port of Drogheda, located 30 miles away, and dropped the load there.

While the fact that the Ottoman government extended a helping hand to a poor country, located 4,000 kilometers away, and to the people who were not even of their own religion, was an unprecedented act of generosity, it is also astonishingly surprising that the British government blocked aid to a country under its sovereignty.

The star and crescent on emblem

The letter of appreciation from the Irish nobility and people to the Ottoman Sultan is in the archive of Topkapı Palace today. 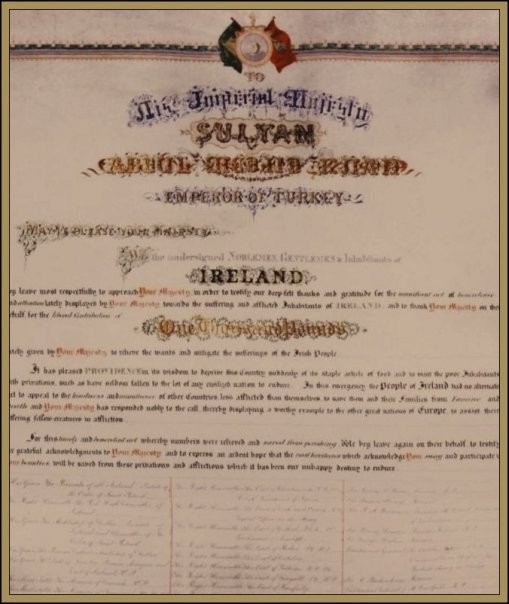 In this letter, the extract says: "As the Irish nobles and people, we, the undersigned, present our dearest gratitude to the generous philanthropy and interest shown to the suffering and grieving people of Ireland by His Majesty [Sultan Abdülmecid], and we would like to thank him for the generous donation of 1,000 pounds sent in order to meet the needs of the people of Ireland and relieve their suffering."

The Irish have not forgotten the goodness of the Ottomans living miles away from them. Founded in 1919, Drogheda Football Club put a star and crescent on their emblem. 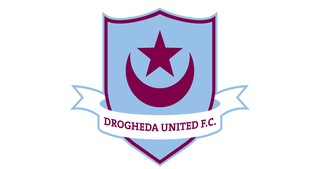 In May 2006, the Drogheda Municipality, celebrating its 800th anniversary, put a plaque of gratitude on the wall of the municipal building (today's Westcourt Hotel), which hosted the Ottoman sailors who brought the aid 150 years ago at that time, in order to honor the memory of this incident. 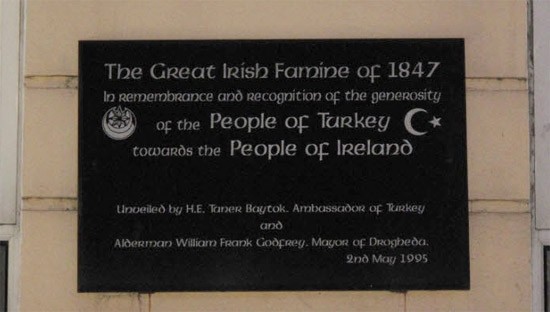 A few lines on this plaque express the generosity that summarizes the history of humanity, which can be told in volumes, in a few sentences.

At the ceremony, Drogheda Mayor Alderman Frank Goddfrey, drawing attention to the star and crescent on the city emblem, said, "I hope that the plaque of gratitude will be a symbol of friendship between the peoples of the two countries." Ireland's Great Hunger Museum director also emphasized that they were grateful to the Turkish people and the Ottoman Empire.

Even though an Irish journalist has recently claimed that the donation was a myth - there is no record of the donation in the register of the port authorities - adding that the star and crescent on the city emblem dates back to the 1210s, this aid from the Ottomans has taken its place in the national conscience of the Irish people.

Irish President Mary McAleese, who supported Turkey in its EU affairs, recalled this incident when she visited Turkey. "The Irish people have never forgotten this rare generosity. The symbols on your flag, this beautiful star and crescent, became the symbol of the city. We even see these beautiful Turkish symbols on the football team's uniforms," McAleese said.