The Battle of Gallipoli: Defining moment of WWI 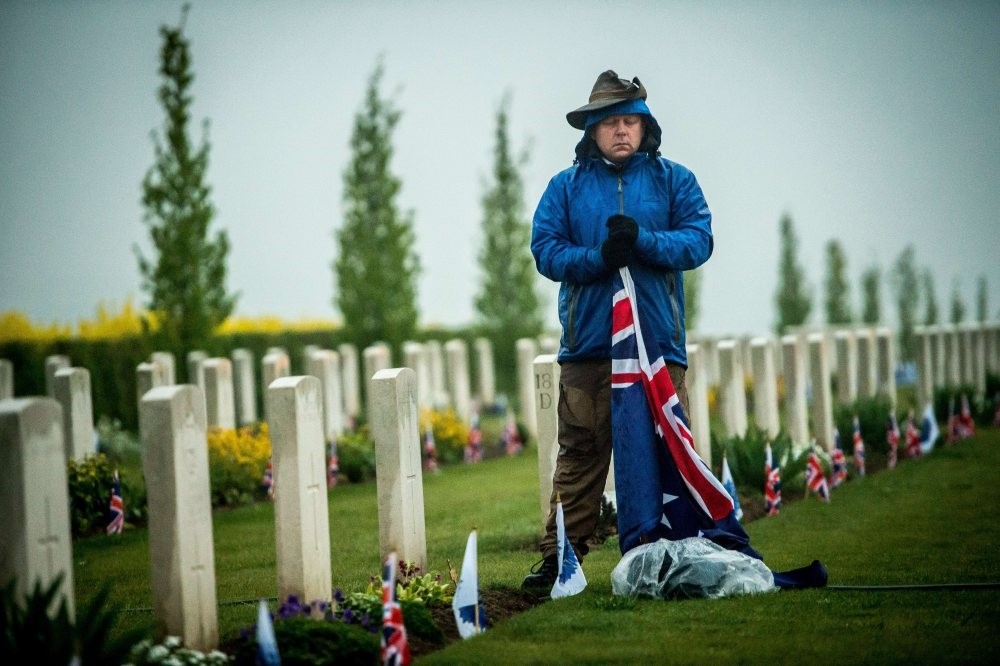 A man pays his respect to fallen Australian soldiers died in the Battle of Gallipoli during a dawn ceremony marking the 100th anniversary of Anzac Day on April 25, 2015.
by Ahmet Günhan Apr 25, 2017 12:00 am

While celebrating the 102nd anniversary of the Ottoman victory in the land campaign of the Battle of Gallipoli, Turks continue to pay respect to the Anzac soldiers who were brought to unknown lands to fight a nation they did not even know. Every year, the grandchildren of the Anzac and Turkish soldiers come together in Gallipoli to remind the world of the importance of brotherhood and peace

On April 25, 1915, the allied British, French, Australian and New Zealander troops landed in the Dardanelles Strait. Thousands of kilometers away from their homelands, the Anzac troops composed of Australian and New Zealander soldiers landed on the shores of the strait without knowing what was awaiting them. Having been told that they would be able to overpower the Ottoman Army, the troops arrived unaware that soldiers from all over the Ottoman lands would be waiting for the enemy when they landed on Arıburnu. On that day, many good soldiers died; including Ottomans who fell as martyrs fighting for their country and Anzacs who lost their lives fighting a war in the name of colonialism.

After the failed naval campaign on March 18, the main goal of the allied forces was to eliminate the Turkish forces that were positioned around the strait, take the city of Istanbul and knock the Ottoman Empire out of the war completely. However, they certainly underestimated the strength of the Turkish forces stationed along the Dardanelles. 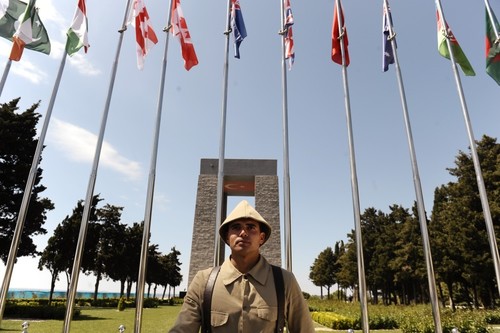 A Turkish soldier dressed in the uniforms of the Ottoman soldiers during the Battle of Gallipoli paying his respects to the lost lives on both sides in front of the Gallipoli memorial during the ceremony held yesterday.

On July 28, 1914, the greatest war history has ever seen in the history of European allied powers and the central powers was brewing. German forces began marching into western Europe, invading Belgium and Luxembourg before being stopped by the allied forces in Marne with the settlement of the well-known Western Front. Soldiers from both sides built thousands of miles of trench lines across continental Europe. The trench lines remained relatively unchanged until 1917.

Sir Winston Leonard Spencer-Churchill, the First Lord of the Admiralty, initially championed an alternative attack on Germany from the Baltic shores. He later planned a naval attack on the Dardanelles region at what is now northwestern Turkey, in order to seize Istanbul. If the city fell, the Ottoman Empire would be out of the war, the passage between Russia and the allies would open and the neutral Balkan states could potentially be persuaded to join the allies. Churchill said a good army of 50,000 soldiers and naval power would surely bring an end to what was considered the Turkish menace. Churchill's proposal was accepted by the British defense Cabinet.

The Allied Navy had attacked the Ottoman soldiers many times on the Dardanelles since Nov. 3, 1914. However, their main campaign started on March 18, 1915. The allied naval forces consisting of 16 battleships bombarded Ottoman positions with powerful cannon fire. Exactly 3,344 shots were fired against Ottoman positions. However, Ottoman artillery and mines that minelayer Nusret placed successfully repelled the allied forces. At the end of the day, three battleships of the allied naval forces sank and four others were heavily damaged.

The triumph of the Turks increased the motivation of the Turkish people and the Ottoman army. Additionally, after heavy causalities in the Battle of March 18, the allied forces realized that Gallipoli could not be conquered with naval forces alone. Thus, the allies made a new plan to orchestrate an attempt to occupy the Gallipoli Peninsula with land forces supported by naval forces, to potentially open a sea route to Istanbul and the Black Sea.

The Australian and New Zealand Army Corps (Anzac) that were formed in Egypt in December 1914 under the command of William Birdwood were part of the Mediterranean Expeditionary Force (MEF) that commanded all allied forces at Gallipoli. Gen. Sir Ian Hamilton was the commander of MEF, which consisted of one Anzac corps, two British divisions and one French division. The total number of soldiers in Anzac totalled 78,000.

On April 25, at 5 a.m. sharp, Anzac troops mistakenly landed at Arıburnu, which is now called the Anzac Cove, with the support of naval strikes. The troops had landed about a mile away from their intended target, Kabatepe (modern-day Gabatepe). The troops were met with fierce resistance from Turkish forces and one of the bloodiest battles in World War I history broke out. The golden beaches of Gallipoli and the turquoise waters of the Aegean Sea turned blood red. The exact number of causalities is not known but at least 2,000 soldiers from each side died that day. The soldiers who landed on April 25, failed to meet their objectives despite making some slight local victories. The allied forces stayed on the battlefield until January 1916 and finally withdrew from Gallipoli with heavy causalities. Meanwhile, Ottoman soldiers positioned in the hills performed nearly superhuman efforts despite the lack of food and ammunition.

Churchill's plan to cross the Dardanelles and send aid to Russia failed. In March 1917, the February Revolution took place in Russia, which saw the Russian tsar overthrown. In the blink of an eye, Russia was knocked out of the war. Moreover, the Ottoman Empire managed to hang on until the end of the war, in 1918. After the failed Gallipoli campaign, Churchill became a scapegoat and was forced to resign from his post.

For the Turks, Gallipoli is one of the most important national memorials. The Ottoman Empire, which was called "the sick man of Europe," defeated the strongest armies of the world. This victory was one of the most important motivations for the Turkish War of Independence.and the beginning of a national revival. Mustafa Kemal Atatürk and other leaders from the War of Independence were in the ascendant.

For the Anzacs, the first landing on day 25 is commemorated as Anzac Day. Anzac Day is one of the most important national occasions of Australian history and the first step in the country's journey to become a nation. The Anzacs came from their homes as colonial soldiers but they returned as Australians or New Zealanders. They displayed tremendous courage and devotion, but the heavy casualties and dismissive attitude that British officers showed towards the Anzacs triggered sentiments of distrust for the British empire.

Speaking to Daily Sabah, Australian Ambassador to Ankara James Larsen said: "It is very much a core part of Australia's national story. Being in Turkey, what is interesting is being able to learn how much history is core to Turkey's national story. It is a fundamental element of the national stories of Australia and New Zealand as well. It defined who we are as a people in many ways, in the sense that our soldiers went overseas to war, donning the Australian uniform for nearly the first time and fighting under the Australian flag for almost the very first time." We always look forward to Australian and New Zealand Anzac Day commemorations on the Gallipoli Peninsula. You have to remember that Çanakkale receives 20,000 to 30,000 Australian visitors each year. On any one day on the Gallipoli Peninsula, you will see Australians walking across the sites dotting the peninsula; namely, the cemeteries and the memorials erected to commemorate the memories of the Anzac soldiers who fell as martyrs thousands of miles away from their homelands.