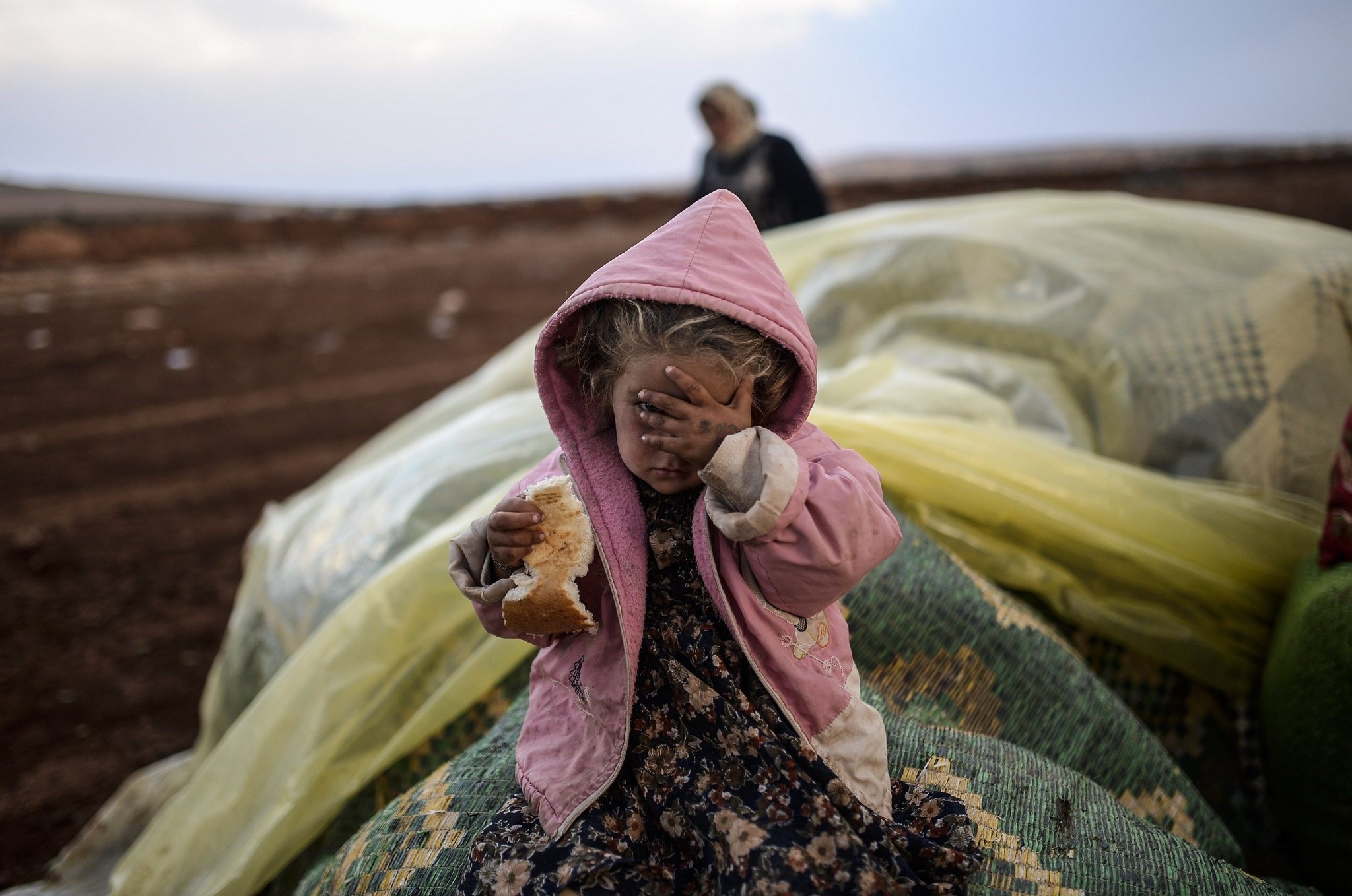 A Syrian Kurdish woman waits with her daughter near Syria border at southeastern town of Suruu00e7 in u015eanlu0131urfa. Since civil war in Syria broke out seven years ago,millions of people died and have been displaced;however, there is still no hope for peace.
by Mustafa Kırıkçıoğlu May 08, 2017 12:00 am

As Washington and Moscow continue to pursue their own agendas under the guise of fighting terrorism in Syria, recent reports suggest that the civilian death toll in the civil war has climbed to over 200,000 as it enters its seventh year

After the sudden death of the Russian ambassador to the U.N. Vitaly Churkin in February, his then-U.S. counterpart Samantha Power published an article in the New York Times titled, "My friend, the Russian ambassador," depicting Churkin as "a masterful storyteller with an epic sense of humor."

The work of these two diplomats on behalf of their countries at the U.N. overlapped from 2013 to 2017 and, during that time, attendees of meetings between Power and Churkin witnessed many heated discussions between the two.

Last November, during one of those meetings, Power asked her Russian counterpart, "Are you truly incapable of shame? Is there literally nothing can that shame you?" in a heated address at the U.N. targeting Churkin in the wake of the massacre of Syrian civilians in war-torn Aleppo carried out by the Assad regime and Russian forces.

The veteran Russian diplomat was angered over Power's discourse. His response to the U.S. diplomat in what was probably one of his rare candid moments.

Rather than initially justifying the massacres, Churkin simply blamed Power of "acting like Mother Theresa" and urged her to "remember what country she is representing," and not to forget "the track record of her own country" rather than referring to the bloodshed in Aleppo.

Eventually, that session was marked as another dysfunctional U.N. session over the Syrian crisis, as the civil war was entering its seventh year. During previous years, numerous similar sessions were held at the U.N. building in New York City, where Churkin and Power, their successors and their predecessors have blamed each other for the bloodshed in Syria, while French and British diplomats prepared countless speech drafts to "denounce" the Assad regime but never being able to achieve this due to the Russian veto factor.

When its "red-lines" were passed, the U.S. barely even opened its mouth to call Russia into account for its support of the Assad regime; however, the U.S. was constantly faced with a scowling Russian diplomat who reminded them of their war crimes during the U.S. invasions of Afghanistan, Iraq and Libya.

Finding a counter-argument has never been hard for Moscow's diplomats, thanks to the notorious track record the U.S. has for invading countries to "establish democratic order" and its numerous military operations; particularly, drone attacks conducted on the soil of third-party countries which frequently resulted in a large number of civilian casualties dubbed "collateral damage."

While the row between Russian and U.S. diplomats regarding who is more responsible for the killings of civilians rages on, the Syrian Network for Human Rights (SNHR) has announced that the death toll between March 2011 and March 2017 in Syria has reached more than 200,000.

According to a recent report released by the London-based human rights group, which has been monitoring the civilian death toll since the Syrian civil war began, eight different factions are responsible for the deaths.

Not surprisingly, the Assad regime tops the list, as it is accountable for approximately 190,000 casualties with 92 percent of the total number. However, the report includes a note affirming, "Since Russia entered the conflict in September 2015, it has become increasingly difficult to distinguish between the actions of the Assad regime and those of Russia in coordination with Assad in Syria."

Albeit the "distinguishable toll" allocated Russia, the country still took the second position on the list below its ally, causing the deaths of more than 4,000 civilians.

Moscow and the Assad regime have never assumed responsibility for these numbers, opting instead of hide behind the guise of "fighting terrorism" which has become the ultimate scapegoat of our modern era.

For those who are familiar with history, the plotline of this story is nothing new. Leaders often try to evade criticism by playing the "terrorist" card and "whataboutism," in what mirrors a similar rhetorical tactic often used by the Soviet Union and inherited by Russia, which hinges on changing the subject and pointing out off-topic faults of other parties in a form of psychological gas-lighting when faced with accusations; particularly in the case of the U.S. where finger pointing includes references to "U.S. war crimes in X location."

The claim or excuse that the massacred civilians were not "actually civilians" is also a tactic that cannot really be counted as original. When the Nazis destroyed the town of Guernica with air raids in 1937, Spanish General Francisco Franco claimed that it was not his German allies but the Basques that had destroyed their own ancient town by placing dynamite in the sewers in order to trigger indignation abroad and empower the Republican resistance. Unfortunately, nothing much has changed in the world since General Franco.

Washington has always had more "liberal" expressions than Moscow when it comes to reacting to the deaths of civilians that it is responsible for. A "shocked" U.S. official generally refers to the "horrifying" event during a press conference, responding to the questions of buzzing journalists while informing people about an "ongoing investigation" regarding the issue. However, in the end, there is never anyone truly held accountable for such "mistakes." Eventually, these shocking events become mere memories that motivate those in search of victory in the "war on terror."

According to the SHNR report, the U.S. has a relatively low record in Syria, having caused the deaths of nearly 1,000 civilians thanks to its passive policy on Syria.

Another report to take into consideration is that of monitoring group Airwars, which revealed that more than 3,000 civilians have been killed by U.S-led coalition airstrikes in Mosul. The fact that more than 400 civilians were killed in a single week in the city in March proves that the low numbers projected by Washington are not the result of the latter's cautionary approach but rather their inaction.

Probably the more striking statistic is that Daesh and Fateh al-Sham, both designated as terror groups by the U.S. and Russia and the main justification point for the two countries' military presence in the war-torn country, were responsible for nearly 4,000 civilian deaths according to the SNHR report, a number which consists of only 4 percent of all civilian casualties.

Both Russia and the U.S. are likely to continue to stay longer in Syria to "entirely eradicate terrorism." However, as Turkish Foreign Minister Mevlüt Çavuşoğlu once said, "There won't be any Syrians left to decide" about their country's' future if things continue in the same way.