Professor R.W. Guillery: A man who made a great impact on Turkish academic circles

Last Thursday Marmara University's Faculty of Medicine held a memorial for a British professor. Professor R.W. Guillery, who passed away at the beginning of April, had worked at the university in Turkey from 2005-2010, where he offered guidance and advice at the medical school

Professor R.W. Guillery was an emeritus professor at Oxford, he was a member of the Royal Society, was the founding editor of the European Journal of Neuroscience, and contributed to a number of other scientific journals and ground breaking research projects. But why would this professor, who spent less than five years at Marmara University, leaving quite a few years ago, be commemorated?

Ray Guillery was first and foremost a mentor. He knew how to teach. He would lead his students to a certain point, and then leave them floundering, knowing that they would swim in the end. One of his former postgraduate students, now an eminent scientist in the United States, said the following about him: "You always taught me how much fun science could be. ...the combination of science, humor and scholarship...I had never seen anything like that before." He goes on "You always helped me find my own answers to the tough questions." 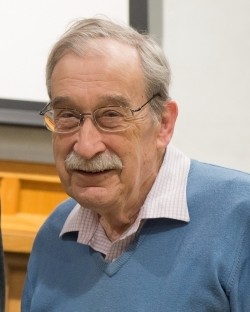 The same sentiments were echoed at Marmara University. There were many tears when talking about Professor Guillery. Not only was he a great scientist; according to the people gathered there he was a kind, generous, caring teacher and a man with ethics and integrity. He was always willing to help them with experimental procedure and to go over any scientific paper.

But perhaps the most important lesson he taught the scientists at Marmara was the ability to say "I don't know" to a question. To be honest about the limits of our knowledge, and then push those limits back.

But if asked the reason why he gave such an answer, he would say that is where I live. He did not call any country home, nor did he "belong" to anywhere.

Ray Guillery was born in 1929 in Greifswald, Germany. His father was a German Christian, while his mother was an immigrant from Russia. His mother's family had been Jewish, but had converted to Christianity in Russia to make their lives easier. Professor Guillery's family on his father's side also had a history of fleeing unrest and revolution. The Guillerys had fled France during the French revolution, relocating in Belgium, from where they gradually moved to Germany.

In 1938 young Ray found out that he had to leave his home. His mother, who had divorced her husband a few years early, had to pack up and leave, essentially overnight. His mother went to England, his sister to the Netherlands and Ray to a mother and daughter in Switzerland. He was supposed to leave by train. As he got to the platform the guard inspected the eight year old's passport and ticket. Seeing the half-crossed out J on the passport, indicating that the boy was half-Jewish, the guard was hesitant to let him on the train. Suddenly, the people on the train saw some police approaching from a distance. They reached down and grabbed this young boy by the arms, pulling him bodily onto the train. These bystanders probably saved his life.

After six months in Switzerland, Ray went to visit his mother in the U.K. His sister joined him. After their summer holidays they were going to return to a boarding school in the Netherlands, while his mother, a highly-trained laboratory technician, would work to save money at the only job she was allowed to do in England as a Jewish refugee - a household servant.

But fate had different plans for this small family. The day before the brother and sister were to sail back to Holland (where, if they had gone, they surely would have been sent to the concentration camps) England declared war on Germany.

Ray and his sister found themselves stranded in a country where they did not speak the language. And the country from which they had originated was now the enemy.

The children were taken in by families until schooling could be arranged for them. These families made great efforts to teach the children English. The children then went to a boarding school and pursued their educations.

Young Ray was bright, but the school thought him fit only to be a carpenter. His mother was determined that he become a doctor. He entered the exams for university, passing with flying colors, much to his school masters' surprise. He enrolled in medical school at the University of London, but realized he did not really like dealing with people so closely. He switched to anatomy, and became a research scientist. Graduating from UCL with a first class degree, went on to complete his PhD from the same institution. He then started to teach at the university, and married a young woman doctor, one of the first graduates from St Mary's medical school.

In the early sixties, the couple, with four young children, emigrated to the U.S., where they hoped their children would be able to get a better education. Abandoning everything they knew, they settled in Madison, Wisconsin. Ray Guillery dedicated himself to studying cats and their visual system, and had many publications; one of his favorite was an article in Scientific American; the cover photo was of a cross-eyed Siberian Tiger.

In the late 70's Ray Guillery moved to University of Chicago, staying there until the mid-80s, when he moved back to the U.K., to take up the post of Dr Lee's Professor of Human Anatomy at Oxford.

His students and his colleagues all have given testimonies to what a great and patient teacher and friend he was. But more than this, after Ray died the local community dropped off cards saying how much he would be missed. He worked hard to help those who were less well off than himself. He donated money and time to those in need. And very few people were aware of how much he actually did for the community. He did it silently, without telling others what he was doing. He would have replied, "Why should I tell anyone? The important thing is that it is getting done." One neighbor related how he had listened to her problems, giving her advice and support. In fact, she said, he - a mere neighbor - was more supportive than her own family.

Many people recognize Ray Guillery as a great teacher, a mentor. Many recognize him as a caring, giving member of the community, always willing to listen and give time to anyone in need. For me, all of these are true. Ray Guillery was my father. He was the greatest teacher my brothers and I had. He would take us for walks, telling us the names of the trees, the songs of the birds, pointing out insects, plants, anything of interest. He would dissect animals with us if we were interested. If we weren't, he would help us to raise them and study their behavior. He taught us how to use the English language elegantly and efficiently. Having learned English under such stressful circumstances, my father had a passion for the language, which I have inherited.

As a father, as a grandfather he taught his children and grandchildren how to observe what was going on around us, how to take interest in others. He was a man who was dedicated to his work - when carrying out an experiment he could become lost in the world of science. But he always made sure that there was time every day and every week dedicated to the family.

Professor R.W. Guillery will be missed. He made the world around him a better place. And it is for this reason that Marmara University gave a memorial service to a man who worked there for just a few years. He was a man who made others feel fortunate to have met him.
Last Update: May 13, 2017 1:00 am
RELATED TOPICS