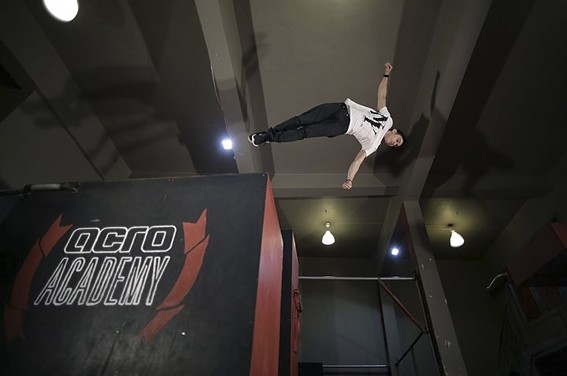 Jump, roll, fall and repeat the modern ninjas of Istanbul have taken over the city and its buildings in the theme of a sport called 'parkour'

They jump on the streets and atop the roofs of the city, simply challenging it. They are the ninjas of the metropolis. What they do is actually a sport. The ones who are doing parkour, the sport of the streets, stand up for being educated at the specially founded parkour academy.

The number of parkour lovers from all fractions of the society is increasing day by day. In addition to children and the young population, there are pensioners and employers between them. They jump on the streets, run on the walls and roll over, challenging the city.

By using their bodies, they jump over everything they consider as parkour on the streets. They jump from rooftop to rooftop without hesitation. That is to say, they are the ninjas of the city.

In the last 10 years parkour, a sport that involves running around the city and jumping over its obstacles, has become popular in Turkey. It is surely the new trend among the country's youth and there is a big chance you will encounter them especially in local parks around the Topkapı district of Istanbul.

Those who are interested in the sport of parkour are firm believers in being educated by the pioneers of this sport.

The most prominent figure of this sport is parkour and free-running trainer, Ömer Günyaz. He is the one who introduced this extreme sport to the Turkish people. He founded Acrorun, the first parkour team of Turkey consisting of the best athletes of the country, with his friends.

Günyaz took up promoting this sport in Turkey as his mission. He says compared to the past, Turkey now has countless parkour teams.

"We were very small in number at first; however, now, there are 1,500 parkour athletes across Turkey," said Günyaz, who started to talk about the philosophy behind the sport. "The city is making us lazier day by day. The sport of parkour, on the other hand, stirs people up. We remember the instinct to move which the modern city has ripped from us."

First learn how to fall

It is possible to come across parkour sport lovers from all fractions of society. There are retired people as well as employees, children and young people enjoying the sport. Training videos that circulate online are playing an important role in the popularity of this sport. 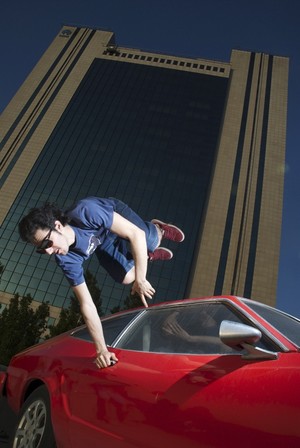 One of the first things that the Acrorun team did was to start working to create a parkour for this sport. However, when the demand exceeds their capacity, they founded the Acro Academy 12 years ago. They created a playground at the center to train people in the several techniques of the extreme sport.

The center features a sponge poll, known as a Ninja Wall, angled and curved walls and ropes and pipes for jumping. In short, it is possible to jump, roll over and bounce in the playground as you like.

"We first ask beginners to imitate animal movements such as walking like a duck, stretching and jumping like gorillas, bouncing like rabbits and crawling like caterpillars," Günyaz said, offering information on beginner's training. "There are so many names and techniques in the sport of parkour. Rolling is really important because, in parkour, you have to learn how to fall before learning how to jump. You jump without hesitation once you learn how to fall down."

There are people coming from outside of Istanbul to our facility. Families want their children to come here, especially to prevent them from sitting in front of the computer all day long.

Practicing parkour on the streets, on the other hand, changes from person to person. Some people do it after one-month training while others do it after six-months of gaining experience.

Parkour and free running is the new trend among Turkish youths. Burak Karadeniz, 20, who has done parkour for three years, began doing it after watching parkour videos on the internet, like so many others before him. 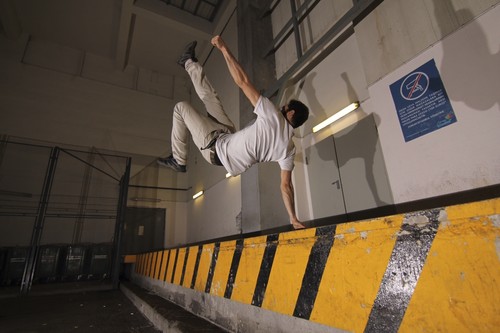 "Parkour makes you feel extraordinary. People get rid of their fears and become more self-confident thanks to it. However, I've never tried it on the street. In the coming days, a friend of mine and I will jump between two nine-story apartments that stand 2 meters from each other. We conquered our fear. Parkour is the youth's fight against the city and it's a new trend," Karadeniz said, explaining that parkour is a difficult and demanding sport.

A sport for fighters

Mustafa Arslan, 24, another parkour student, is also one of those who decided to do this sport after watching parkour videos on the internet. Aiming to be an internationally renowned parkour athlete, Arslan attends training at the center as often as he can find a chance to do so outside of work.

"I really enjoy it. Some people consider free running to be synonymous with parkour but parkour is a sport which requires struggling for success. Parkour is our fight with the obstacles in the city. You see obstacles from a different point of view after undergoing parkour training. You always think of jumping over them. The life outside turns into a different world. I imagine being successful at the sport of parkour," he said.

Arslan claims that people around him as well as youngsters and children are very interested in the sport. His dream, on the other hand, is to make Turkey the first country that comes to mind when parkour is mentioned.