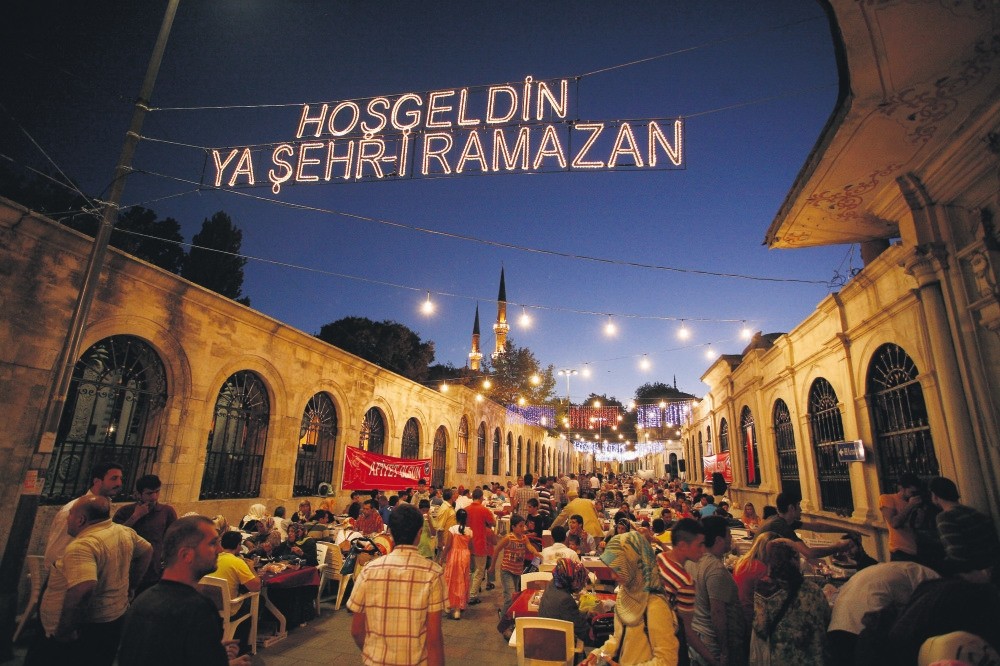 Ramadan, the month that Muslims around the world have been looking forward to almost a year, has finally arrived. Istanbul, the city of minarets, is surely the best place to experience the spirit of Ramadan to the fullest

The dinner table is set: Soup has been put in bowls; olives and dates have found their way near to people's plates; somebody has already begun to pour the water into the glasses. The anticipation is killing the people sitting around the table. The meal looks delicious but everybody is in their toes, waiting for the big finale. And suddenly, they hear a huge banging, like a cannonball, and the imam of the nearest mosque calls everybody to prayer with the azan. Ramadan has finally arrived and Muslims still feel the same thrill every year with the coming of this holy month.

Ramadan, which is one of Islam's five pillars, alongside the declaration of faith; prayer five times a day; alms-giving; and the pilgrimage to Mecca, is the ninth month of the lunar Islamic calendar. During this month, Muslims fast from dawn to dusk, which is an exercise in self-restraint, aimed at making the rich experience the suffering of the less unfortunate.

Istanbul, one of the greatest cities in the world, is definitely a spiritual place. Having stood for centuries, the city has sheltered people from numerous religions. However, Ramadan in Istanbul is surely a different experience. The land of minarets offers a unique and spiritual journey to its residents and guests throughout Ramadan.

There are certain things that most Istanbulites do every Ramadan. Although they sound like clichés, they are the things that keep up the Ramadan spirit all over the city.

Ramadan is the month of special meals. The whole family gets together and eats to break their fast, in a meal called iftar. The Spice Bazaar in Istanbul assumes a new identity during Ramadan. People visit here to pick up the best spices for their delicious meals as well as snacks and dessert for the rest of the evening. If you want to experience the full Ramadan dinner table spirit, you should definitely head there during this month. 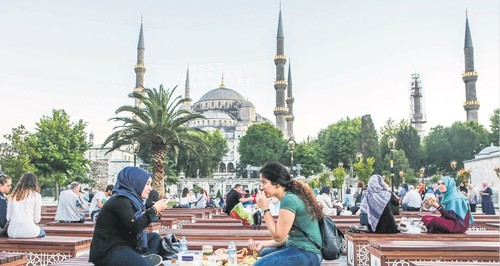 Sultanahmet, located in the Historical Peninsula, is one of the most visited places during Ramadan in Istanbul. The place where you can find both the Blue Mosque and Hagia Sophia hosts hundreds, even thousands of Muslims, as well as tourists during this holy month. The Blue Mosque, which is adorned with blue, green and white İznik tiles, is a place that you can experience spiritual guidance at its best. During Ramadan, people pack their picnic bags and break their fast in the gardens of the Blue Mosque and Hagia Sophia or on the lawns. People share their food with each other and talk among themselves even if they do not know each other. Moreover, theology professor Nihat Hatipoğlu, who hosts a Ramadan TV special, hosts the show live from Sultanahmet every year so you can join the crowd and listen to him in person.

Eyüp Sultan Mosque is another place that draws quite a lot of visitors during Ramadan. Built upon the orders of the Ottoman Sultan Mehmed the Conqueror in 1458 around the tomb of Abu Ayyub al-Ansari, the mosque features a madrasah, a public bath and a fountain. The mosque hosts various events specially programed for Ramadan, and thousands of people around Istanbul spend the night in the garden of the mosque. People make "sahur" in the garden and perform their morning prayers in the mosque. Most come to the mosque after "iftar" and spend time with their loved ones until dawn. This year, Istanbul Metropolitan Municipality cleaned the entire courtyard of the mosque as well as the interior with rosewater, and announced that municipality workers will do the same every day during Ramadan. If you want to get into the Ramadan spirit, Eyüp Sultan Mosque might be the right place for you.

During Ramadan, people pray and make wishes for themselves and their loved ones. The Oruç Baba Tomb in Istanbul is one of the most frequently visited places in Istanbul. Oruç Baba is rumored to be a pasha in the army of Ottoman Sultan Mehmed the Conqueror. People pay a visit to the tomb of Oruç Baba and break their fast. They later pray for this historic figure and make wishes. The tomb is always crowded during Ramadan, so if you want to break fast in this location, you have to get there early.

Istanbul Metropolitan Municipality also organizes a number of Ramadan events that are suited for the spiritual atmosphere of the month. This year, Yenikapı will be the center of the Ramadan events. Additionally, other events such as a concert of Sufi music, poetry readings, whirling dervish shows, shadow puppet shows and stage plays will be organized in Sultanahmet, on the Maltepe Coast, as well as Feshane.