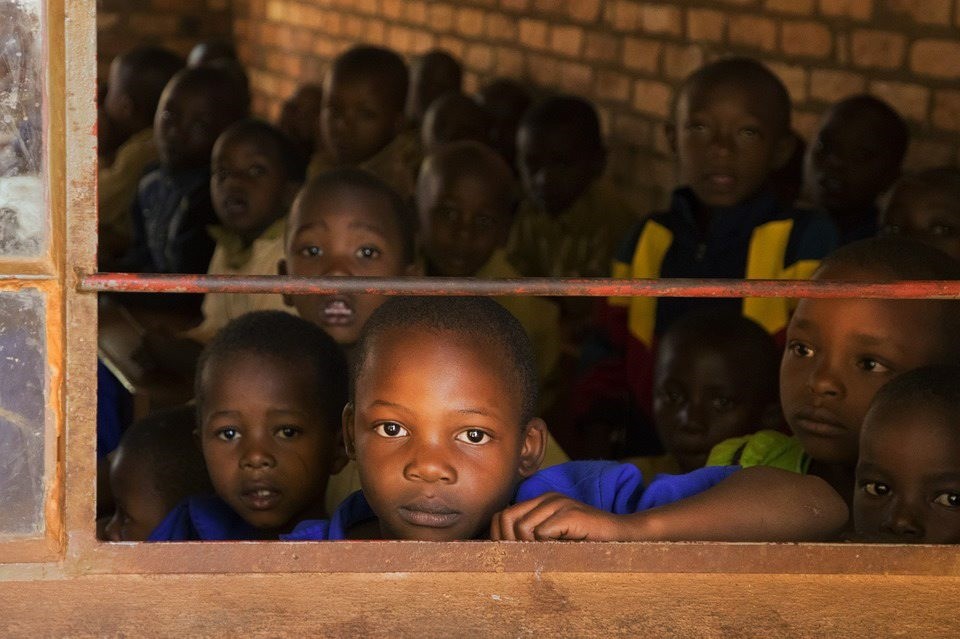 Despite the many hardships and obstacles they face in daily life, Zimbabwean children head to their makeshift schools every day to continue their education. Although conditions remain more the challenging, the unwavering people of Zimbabwe spare most of their income to the education of their children

As a young senior student at Tabudirira Primary School hits a huge piece of metal dangling from a tree that serves as a bell, ringing fills the air of the school yard, sending about 300 children, most of them without uniforms, scampering to the assembly point where the Zimbabwean flag is hoisted on a pole. The school functions as one but does not look like one. One building is a pole-and-mud structure with a thatch roof and as classroom block is an old, abandoned farmhouse. With a few exceptions, the pupils streaming toward the assembly point run barefoot.

"We enjoy being at school. What we want is to become educated and change our lives," Agrippa Chumunorwa, a student at the school, said. "Most of the pupils you see around here are orphans and some come from very poor families, but at least we have people sending us to school," added Chamunorwa, who is 14 years old and in the seventh grade, the highest primary level of education and the highest grade at the school. Zimbabwe's primary level of education begins with first grade and ends at seventh.

Primary school age in the southern African nation is generally from six to 13 years old. Records from the Mutoko District Education Office in Mashonaland East Province indicate that Tabudirira Primary school last year boasted an 86-percent pass rate for seventh grade examination results. And true to the statistics available to the public, the school here has turned out to be one of the makeshift structures contributing to Zimbabwe's over 90 percent literacy rate, this amid reports that Zimbabweans generally value education over all else.

UNESCO's Institute for Statistics in 2015 estimated that 83.6 percent of Zimbabweans aged 15 and older were literate in 2011. According to the UNESCO estimates, several other sub-Saharan African countries had higher literacy rates than Zimbabwe, including Equatorial Guinea with 94.2 percent, South Africa with 93 percent and Gabon with 89 percent.

The Financial Wellbeing Survey Report from 2015 called "Priorities of the Zimbabwean Employee" indicated that most Zimbabwean employees prioritized school fees above other expenses. The report was compiled by Memory Nguwi, who is the managing consultant of Industrial Psychology Consultants, a Zimbabwean management and human resources consulting firm.

"Regardless of how much an individual earns, school fees, food, rent and accommodation still remain the most important things that employees consider when spending their money," the report said.

And since independence in 1980, this southern African nation's government has always prioritized education by giving it the highest allocation in its national budgets. The long-time president, Robert Mugabe, has declared education in primary and secondary public schools to be a basic human right.

But this has not been the case when it comes to upgrading school infrastructure over the past three decades. As a result, several makeshift schools like Tabudirira in Mashonaland East Province are still suffering from poor infrastructure 37 years after Zimbabwe gained independence from Britain.

"Hard work has produced the results we enjoy here even though we teach our pupils in temporary structures," a teacher at Tabudirira Primary school who refused to be named for professional reasons, explained. "There are no classrooms, but our pupils are very hardworking. That's why they do well despite the challenges we face."

The thriving makeshift schools, some of which are run by indigenous entrepreneurs, are not only in the country's rural areas but in urban areas as well.

Marylyn Sigauke, a teacher at a makeshift school in the informal Caledonia settlement just outside Harare, said: "We have no proper classroom facilities even here closer to the capital city, and although our pupils do well in their studies, they also learn under trees exposed to the vagaries of weather."

According to the Ministry of Education, Zimbabwe has 1,425 makeshift schools in rural and urban areas, despite the country boasting about the strides it has made over the years in education, which many rights activists dismiss.

From independence in 1980, Zimbabwe's Zanu-PF-led government has advertised the investments it made in 5,753 primary schools and 2,312 secondary schools, employing over 70,000 primary school teachers, 90 percent of whom are qualified teachers.

"Developments in education such as the building of more proper schools in Zimbabwe ended in the early 1990s, and all the schools that have followed are mere temporary structures, and one wonders how teachers are managing to produce good results. Really, Zimbabwe with a proper educational infrastructure would be among the best in terms of education globally," said Claris Madhuku, director of the Platform for Youth Development, a civil society organization. In 2014, Education Minister Lazarus Dokora went on record claiming his ministry had secured a $23 million loan from China to improve the infrastructure of makeshift schools.

While literacy is assured in this southern African nation, the rest is not. Based on statistics from Zimbabwe's Ministry of Higher and Tertiary Education, approximately 30,000 students graduate annually from the country's institutions of higher learning amid the country's official unemployment rate of 10.7 percent, which in reality, however, stands at above 80 percent of the adult population of this country of 13 million people who have no formal employment.