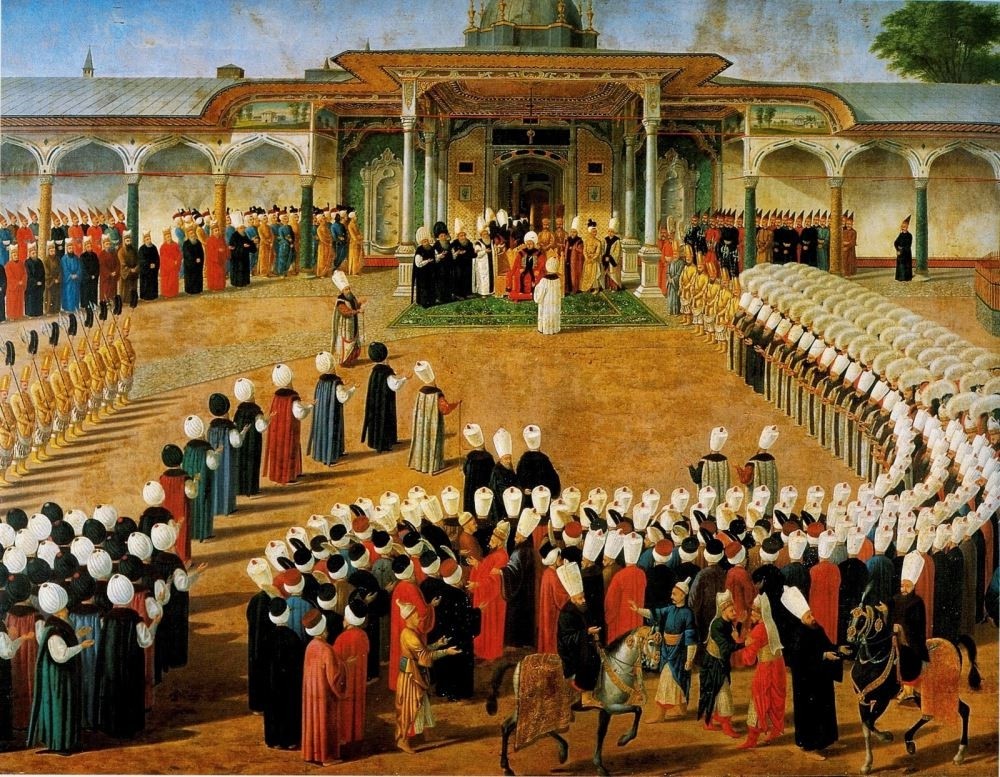 A painting depicting court members waiting to appear before the Ottoman sultan in the courtyard of the Topkapu0131 Palace.
by Miraç Tapan Jun 07, 2017 12:00 am

Considered a time for reawakening the spirit, the month of Ramadan is also a time of nostalgia in which memories come flooding back with important rituals. The Baklava Procession, once an important part of Ramadan in Istanbul, is now being revived for old times' sake by the Fatih Municipality

Ramadan is the time that Muslims all over the world cherish all the things that they have been blessed with. Through fasting, a Muslim tames their physical appetites, subduing greed and lust and thus traversing down a path that progressively elevates consciousness from the physical to the moral and ultimately to the spiritual dimension of being. Fasting leads to self-discipline and it is the ideal catalyst for the betterment of society by improving the self. It is also by means of fasting that those who have not otherwise experienced hunger or thirst are made personally aware of the plight of the underprivileged, thus evoking a sense of social awareness.

Although Ramadan is a religious practice, Muslims around the world established certain Ramadan rituals in their cultures. And Turks are no exception.

During Ottoman rule in Anatolia, the Balkans, Arabian Peninsula and Northern Africa, the people living under the Ottomans, Muslim or not, looked forward to this holy month as the entire empire assumed a more spiritual identity. A feeling of solidarity rose among the people and, as part of this atmosphere, new traditions came into being. 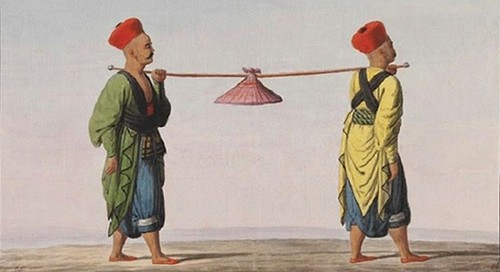 A painting picturing two janissaries carrying a tray back to their barracks following the Baklava Procession.

Among all the sweet treats in Turkish and Ottoman cuisine, baklava is the most famous. Although many claim to own the origins of this famous sweet pastry, baklava is clearly a dessert from this land with records of "pleated folded bread" found in Turkic dictionaries as early as the 11th century. Back then, Turkic nomads used thick layers to make baklava, eventually starting to make the dough thinner and thinner to form the crisp layers that we enjoy today. Inspired by the places they had conquered, these Turkic nomads began to put layers of nuts between the dough, similar to Persian pastries. However, modern baklava, which has stolen the hearts of numerous people, is believed to have taken its final shape in the Ottoman court at Topkapı Palace.

During the reign of Ottoman Sultan Süleyman the Magnificent, the spirit of Ramadan and the delicious taste of baklava come together and turned into a ceremony that Istanbul looked forward to throughout the year.

The Baklava Procession first appeared during Süleyman's reign, and all Ottoman sultans made a name for their generosity. It was also crucial to make the janissary, the elite Ottoman army, happy since the empire was always attempting to expand its borders. Ottoman sultans distributed a large meal of pilaf, lamb stew and saffron-flavored rice pudding (zerde) before setting out on the campaign trail. In time, this tradition turned into the Baklava Procession, which was a ceremony overseen by the locals of Istanbul every year.

Basically, a big tray of baklava was given per every 10 janissaries on the 15th day of the month of Ramadan. However, nothing was so simple and modest in the Ottoman era. In the middle of the month of Ramadan, the sultan, who was also the caliph of all Muslims around the world, paid a ceremonial visit to the Mantle of the Prophet and the other holy relics. Following his return to Topkapı Palace, the sultan ordered trays of baklava to be baked in the imperial kitchens. When the baklava was ready, the trays, wrapped in cloths, were laid out in the courtyard for everyone to see. Once all the preparations were done, Silahtar Ağa, the top janissary, came to the front and received the first tray on behalf of the 10 soldiers, including him, followed by the chief of each squad who received the other trays. Then, the soldiers joined the parade and marched to the barracks accompanied by a huge crowd of people. The janissaries walked to their barracks singing heroic songs, their blades on their shoulders and trays over their heads. The following day the empty trays and cloths were returned to the palace with a similar ceremony to show the sultan that the baklava was so tasty.

Despite its unprepossessing end, the procession was one of the interesting customs in Istanbul in the past, and for the last couple of the years, Istanbul's Fatih Municipality brings this important part of Istanbul's history back to life.

As a part of the Ramadan entertainment lineup and iftar gatherings organized by the municipality, this Saturday, Fatih Municipality Mayor Mustafa Demir will observe the 500-year-old Baklava Procession tradition in Sultanahmet Square this year. Actors and military officers dressed as Ottoman janissaries will take part in the procession. A total of 20,000 boxes of baklava will be distributed to Istanbulites and tourists in the courtyard of the Blue Mosque, reviving the almost forgotten Ramadan traditions of the Ottomans.