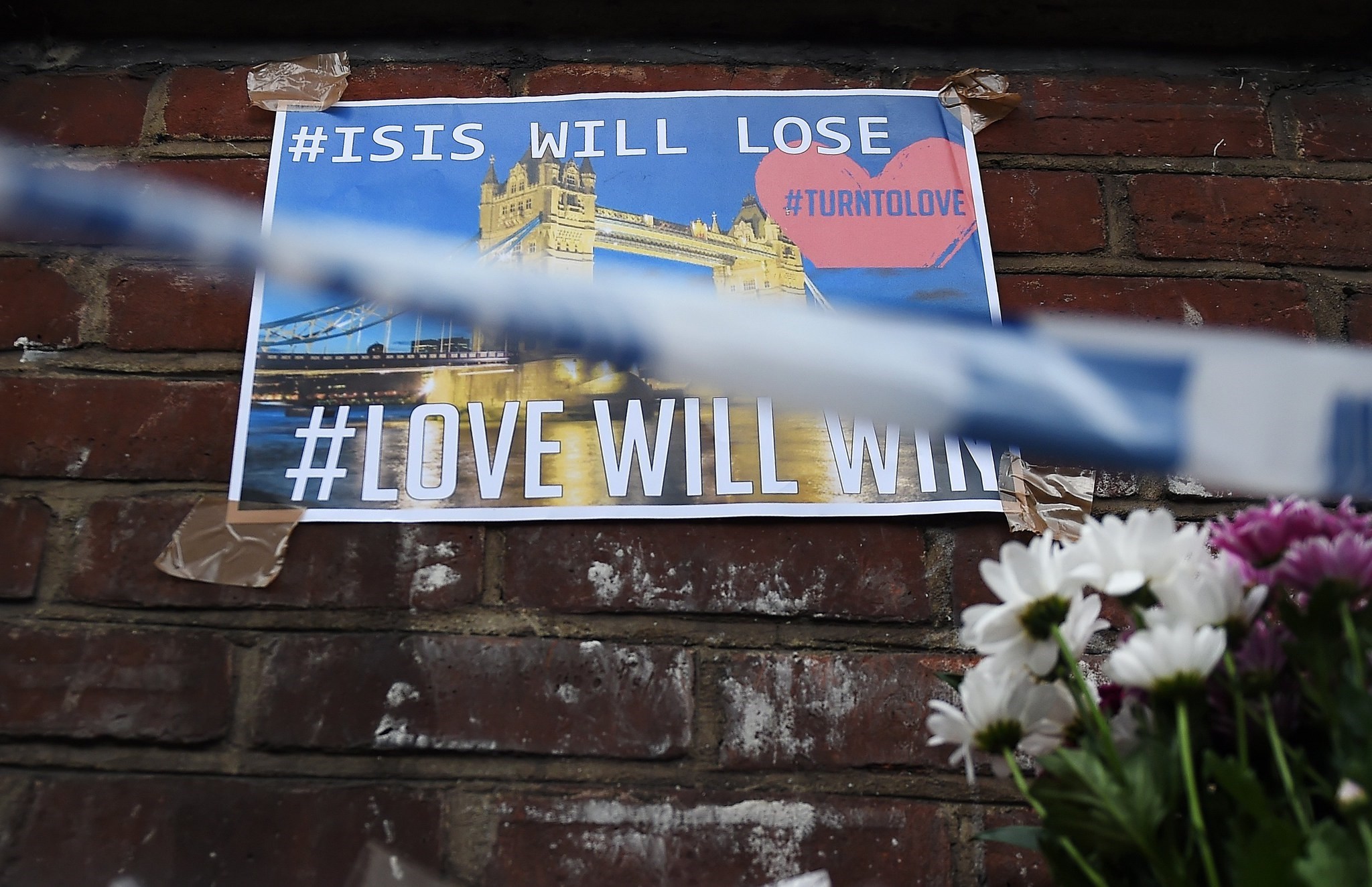 An anti-Daesh poster seen near Borough Market, in the aftermath of multiple June 3 attacks, London, Britain.
by Fatima Abushanab Jun 08, 2017 12:00 am

Spreading around the world like an epidemic, Daesh's recent attacks wereperpetrated with a sick mentality of horror aimed at destroying all of civilization

The terror that recently struck Manchester and London calls for more attention to address the ever-growing cancer of terrorism spreading around the world. What is so chilling about the terrorist attacks in London, Manchester, Istanbul and Kabul is they are perpetrated with a sick mentality of horror aimed at destroying civilization. Regardless of how many critics speak and write about Islam's compatibility with democracy, they continue to miss the most crucial point. Yes, Islam and the values of democracy are compatible, but the more pressing question is the inaction that lies behind the constant reassurance that we Muslims are not foes of the West. It is banal to continuously have "experts" on Islam and terrorism on CNN, the BBC, Al Jazeera and other media outlets say that the problem is not with Islam. Yes, the problem is not Islam. However, why is defensiveness the norm? The issue lies in the disease of a twisted mentality that is out to get all peaceful communities around the world.

Be it Manchester or Kabul, terrorism is terrorism. It has no religion. It does not differentiate among its targets. Daesh terrorists put themselves on a pedestal and reject any sort of differentiation from itself. Anything that is not like Daesh is foreign and, therefore, labelled the enemy. Undoubtedly, terrorists wants to bring down civilization, which was built on the foundation of diversity, understanding and values that we find deeply resonating in our respective cultures stretching from Istanbul to Kabul and London. For terrorists, the message is clear, the war is the U.S. versus the others. Perhaps this is what is so alarming to all of us who stand against terrorism. The terrorisdm we face from Daesh is not the kind that is time- or place-specific in our current day. It has been designed with the ultimate aim to wreck civilization and destruction is its goal. Terrorism seeks to destroy everything other than itself and deems anything foreign to its ideology as evil.

How do we tackle Daesh?

It is quite obvious that counterterrorism measures taken by many governments have proven to be ineffective. The main reason for this failure is the lack of coordination and cooperation among state leaders to collectively address the problem. Selectiveness when applied to terrorism is a grave mistake. This is a major issue that President Recep Tayyip Erdoğan has been calling attention to for many years. He has continuously said that the global community is suffering from an ailment whose remedy is within our reach. For a solution, we must unite against all forms of terrorism to stop the tragedy of innocent lives being taken from our communities. Looking at the issue from Turkey's perspective, the parallelisms between the main purposes of multiple terrorist organizations like the PKK and its Syrian affiliate Democratic Union Party (PYD) and its armed People's Protection Units (YPG), the Gülenist Terror Group (FETÖ) and Daesh. The main aim of all these groups is to terrorize innocent people to achieve their despotic aims. We see this same exact terrorism manifesting itself across the board. So, why do world leaders still insist on cherry picking?

We are now living in an age of terror in which the fight cannot be individualized by states. There must be a unilateral understanding that terrorism is terrorism and we cannot make any distinction between terrorist organizations. A new plan in the fight against terrorism calls for a re-evaluation of past and current policies. From NATO to the EU and to other critical, bilateral relations in the West, the Far East, the Middle East and other parts of the world, leaders must brainstorm how to enhance their national security. A new plan requires a collective effort, new tools and a new vision. Otherwise, we are doomed to repeat the same mistakes.

One of the very unfortunate and costly mistakes that continues to be made is the utilization, support and funding of certain terrorist groups against administrations, certain political actors and other terrorist groups in some parts of the world. The Taliban is an example that most people may not recall. During the presidency of Ronald Reagan, members of the Taliban were hosted at the White House and compared to America's founding fathers. A decade or so later, under the administration of President George W. Bush, they became public enemy number one of the U.S. and its allies.

A more current example is evident in U.S. support and utilization of the PYD and YPG in the form of boots on the ground in Syria in the fight against Daesh. The utilization of a terrorist organization against another terrorist organization brings with it a plethora of complications. First of all, there is no such thing as a good terrorist. Let us be clear on that. A terrorist organization, no matter what national purpose it may temporarily serve, cannot be trusted because that terrorist group may turn on its supporters at any given time. Furthermore, this unhealthy cooperation may come with high costs regarding international relations. This is visible in the notable strain we have seen in U.S. support for the PYD and YPG, which continues to cause a rift in U.S.-Turkish relations. Time is of the essence and we cannot afford to wait any longer. We must accept that terrorism is terrorism and knows no distinction. Cherry picking is inapplicable to the modern global threat we face.