Once an enemy now an ally, Barzani pushes for independence despite Turkey 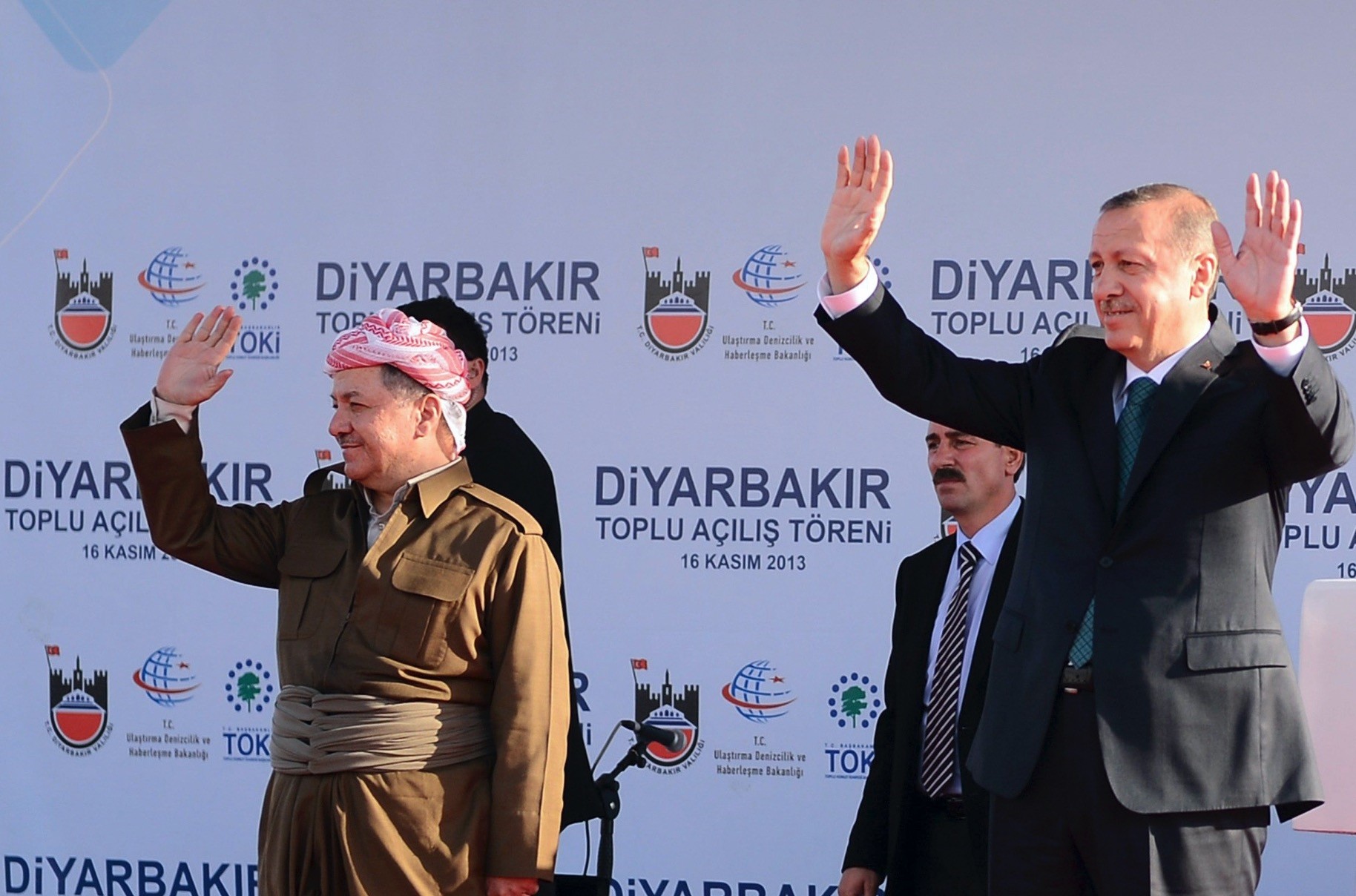 President Recep Tayyip Erdou011fan and President Masoud Barzani of the Iraqi Kurdistan Regional Government (KRG), greet the crowd during an opening in Diyarbaku0131r on Nov. 16, 2013.
by Ayşe Şahin Jul 03, 2017 12:00 am

Overlooking reactions both at home and from abroad, KRG leader Barzani has rolled up his sleeves for a referendum on independence. Barzani's tenacity for independence is likely to mar a hard-won alliance between the KRG and Turkey, due to the latter's stringent objection to an independent Kurdish entity on its border

As in the recent cases of Russia and Israel, Turkish history is rife with examples of adversaries becoming friends and vice versa. However, the sharpest and suchlike twists most likely took place when Kurdistan Regional Government (KRG) leader Masoud Barzani became a "strategic partner" after years of blistering accusations by Turkish authorities that he was aiding and abetting a virulent foe; namely, the PKK. The accusations were indeed well founded back then. The PKK had begun deploying its militants to northern Iraq during the 1980s when it launched its first terror campaign against Turkey, having remained nestled in the Qandil Mountains ever since, where the PKK's administration has coordinated and implemented its deadly assaults against the Turkish state and civilians for decades.

Barzani's Kurdistan Democratic Party (KDP), albeit a bit unsettled regarding the harboring of PKK militants in its territory which has driven a wedge between it and neighboring Turkey - did very little to curb their existence in the region back then. It was not until Turkey and the KRG were drawn close together for economic purposes that Barzani vocally opposed the PKK's existence in his territory; respectively calling for the terrorists to vacate Qandil.

2011 was a turning point, forged greatly by Turkey's relations with the Iraqi Kurds. For the first time, a visit at the prime ministerial level was made to Irbil. By then, Turkish businessmen had already launched investments in the region, sowing the seeds of a strong economic partnership. Another breakthrough was Barzani's attendance at the Justice and Development Party (AK Party) Congress one year later. The following year, Barzani visited Diyarbakır upon the invitation of then-Prime Minister Recep Tayyip Erdoğan, marking Barzani's first visit to the city after 21 years. He was there to expose his solidarity with the Turkish government regarding the newly launched settlement process to end the decades-long conflict between the PKK and the Turkish government.

Despite a flurry of criticism from opposition parties, the KRG leader received a warm welcome on that historic day, both from AK Party officials and Diyarbakır locals. It was a historic moment; namely, because numerous "firsts" occurred as hundreds cheered the arrival of Barzani aside Erdoğan as the two stood side by side to deliver fervent messages of peace. For the first time, Erdoğan had used "Kurdistan" in reference to the region Barzani governed, breaking a long-standing taboo in Turkish history. Both Turkish and KRG flags were fluttering side by side and Barzani and Erdoğan conveyed unified messages of peace to a massive crowd. Barzani, who made the first appearance on stage, said: "Long live the brotherhood of Turks and Kurds," topping off his speech as a roar of applause ensued. That day marked the beginning of a genuine amelioration of ties between the northern Iraqi government and Ankara.

What brought both parties together back then no longer exists now, as reconciliation efforts were nixed with the PKK's ending of a cease-fire as it resumed its terror campaigns right where it had left off. However, one thing remained permanent from that day forward: An alliance that has grown in strength both politically and economically to this day, bringing the partnership to unprecedented levels.

Despite its optimistic past, this strategic partnership is now on shaky ground as KDP leader Barzani seeks to hold a referendum in September to achieve the KRG's long-anticipated bid for independence; an aspiration that has caused ripples on Turkey's part. Turkey, which has been grappling with the PKK threat most intensely in its southeastern region, is perturbed that an independent Kurdish state along its border could trigger separatist sentiments among Turkey's Kurds.

With that in mind, Turkey demurred firmly, saying that would be a "grave mistake" in what sounded like a caveat. That reaction was followed by President Erdoğan's comments on the issue, which denoted that he was saddened by the referendum decision and assured that such a move was the wrong step to take "at such a critical time." He also said that he wished the former had consulted with Ankara before making such a move. Aside from such stark warnings, Turkey has not asserted a dictating tone regarding the issue, choosing instead to refrain from portraying the matter of independence as one of its red lines, apparently in an attempt to avoid making a u-turn if an agreement between the central government and the KRG is ultimately achieved in the end. Iraqi Prime Minister Al-Abadi has already given the green light to the KRG's independence goals, underscoring that the timing may be off, just as Turkey and the U.S. did.

"Barzani's authority is being usurped by other powers. The PYD is gaining power in the region and is being supported [by external authorities] on the grounds of fighting Daesh. Tomorrow, a state will be established and there will be a weakened Barzani. That is why he is rushing. ...To prevent that from happening. ..." said journalist and author Kurtuluş Tayiz, who also warned Turkey to be attentive regarding the independence issue: "What will be left to do if the Kurdish state that you backed yourself, demands territory?""Turkey has not said it is absolutely against it. However, it needs time to evaluate the situation. Is Barzani really reliable? I have reservations about that. In some way, it is the KRG that has empowered and hosted the PKK for years. The government is against the PKK in theory but in actuality this stance could be held either to delude Turkey or to evade its own weakness. The latter is equally disadvantageous for Turkey. It means it can bow down to other powers as well once the conjecture changes."

The idea of independence has not come out of the blue. Barzani's government has been at odds with the Iraqi government since the time immemorial, suffering most at the hands of the brutal Saddam regime which destroyed Kurdish villages and massacred hundreds using chemical weapons. The post-2003 period was not as bloody but discord remained with the emergence of fresh issues on shares in budget and oil. The very conflict paved the way for Barzani, who signed various oil deals with Turkey, to form closer ties with Turkey. The partnership also brought Turkey an advantage in the form of Kurds exporting Iraqi oil from the Kurdistan region via its territory, provoking further disagreement between the central Iraqi government and the KRG. The exports of oil via Turkey without the consent of the central government also fueled dissent at home against Barzani - amid anti-Barzani parties PUK and the Goran Movement, that were uneasy over confronting Baghdad for exporting thousands of barrels without coordination with Baghdad.

Middle East expert Can Acun cites political dynamics at home as reason for Barzani's independence decision. He says, "There is growing dissent against Barzani [the PUK and the Goran Movement], and Barzani wants to strengthen his hand with a referendum. He wants to remain the dominant figure in Kurdish politics."

Despite impediments abroad and at home, Barzani seems adamant on holding the referendum for the KRG's independence. The U.S Department of State has stated that they support a united Iraq, expressing concerns that such a referendum might push the priority of fighting against Daesh to a back burner. Russia stated they supported the territorial integrity of Iraq and the issue should be resolved through dialogue. Germany suggested that the KRG refrain from taking unilateral steps, saying it is not right to jeopardize Iraq's integrity and to re-draw borders in the region. Turkey, which suffers from a long-standing syndrome of the establishment of "Great Kurdistan" that could include southeastern Kurdish-majority parts of Turkey, fears that if a Kurdish state is founded from Iraq, it would appropriate the PYD-occupied territory in Syria, which could fan further instability in the region.

Academic Ali Faik Demir, who is specializes in foreign affairs, thinks these are hollow fears. He says: "I understand Turkey's concerns but, when we look at Middle Eastern geography, which Arab states could unite? [Likewise], the Kurds are not homogeneous in the region to become one and unified. Plus, the key for a Kurdish state in northern Iraq to keep its existence is the hands of Turkey. A Kurdish state squeezed between Baghdad and Turkey cannot sustain its independence," said Demir, who added that the KRG would ultimately give Turkey assurance before embarking on the independence issue. Demir also said, "Turkey does not and cannot have a problem with the Kurds or entertain the concept of a Kurdish state, but Turkey has a problem with terrorism. If these were Turkmens supporting the PKK, Turkey would fight against them too."

Author Vahdettin İnce believes that the KRG "would never be an enemy of Turkey," be it under an independent Kurdistan or under its current status.

"The same fears existed when the KRG gained its autonomy. Fears that it would cause trouble for Turkey. ...See what happened? They became real friends."