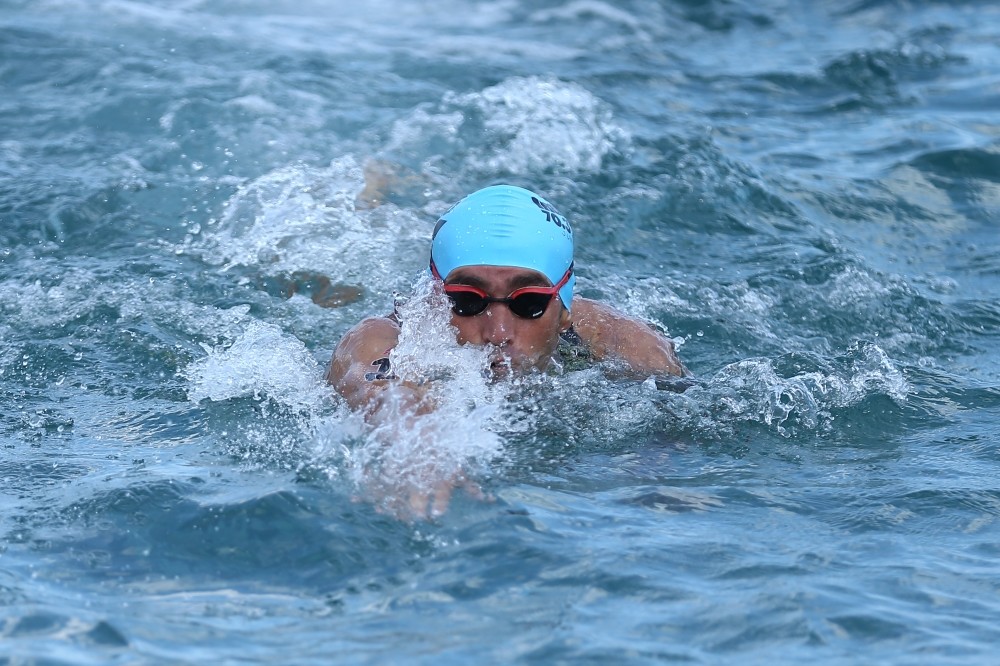 In the traffic accident he was involved, national triathlete Karabulut broke his foot he was told it would take a year for him to run again yet he was able to run a half-marathon 52 days later and become Turkeyu2019s first u201cIronmanu201d just 4 years later.
by Anadolu Agency Jul 05, 2017 12:00 am

Turkey's national athlete Zülfü Karabulut has a passion for sport. After he was involved in a car accident, doctors said it would take years for him to recover, yet Karabulut managed to get on his feet in less than two months, becoming the first ‘Ironman' in Turkey

After surviving a major traffic accident, national triathlete Zülfü Karabulut was told that he would not be able to run again for at least one year. However, just 52 days after the accident, the athlete participated in a semi marathon and then, four years later, won the title of Turkey's first professional "Ironman."

Having started his professional sports career in Turkey's Elazığ province in 1998 by joining the national team, Karabulut gave up the sport as a result of doping cases that overshadowed the athletic community during his time as a student at Gazi University's School of Physical Education and Sports.

The national athlete started cycling on advice of his school friends and was crowned the champion of Turkey. However, he also gave up biking due to problems he faced, leading him to pursue the sport of triathlon instead.

Earning Turkey the championship title in triathlon in 2008 and 2011, Karabulut suffered a major setback when his foot was broken as a result of an accident in Ankara in 2013. Although doctors told him that he would not be able to run for at least a year, the national athlete successfully participated in a semi-marathon 52 days after the accident and was crowned with the championship title for Turkey again in 2016.

With the support of his sponsors, Karabulut participated in the "Ironman 70.3" event, which is held in Italy's city of Pescara, in a professional category. Completing the contest in the 15th row, Karabulut became the first "Ironman" athlete of Turkey.

National athlete Karabulut spoke to Anadolu Agency (AA) about how and when he started his sports career. He recalled that when he was a student at Gazi University, he was warned by some of his friends against participating, with his friends saying: "You cannot participate in any competition without using drugs. Everyone uses it, why don't you?" As a result of such comments, he decided to give up athletics.

Karabulut went on talking about how he started his career in cycling. Again, at the recommendation of his friends who encouraged him to pursue cycling, Karabulut took up the sport. He gained a championship title in mountain biking and ranked numerous times in cyclo-cross.

Giving up cycling, Karabulut took up triathlon competitions as a professional athlete. "After five months of exercise, I ranked third in the first leg of the Turkey Championship held in Mersin in 2008. I became the Turkish champion in overall rankings in 2008 and succeeded in the Turkish triathlon championship in 2011 and 2016," said the national triathlete.

Speaking about the traffic accident he was involved in October 2013 in Ankara, Karabulut said that the accident changed his life.

Karabulut explained that screws were inserted into his broken foot during a surgical operation, adding: "These screws took five years from my life. I had serious problems with them. I couldn't exercise. I lost all of my motivation entirely. I feared that my sports career was coming to an end. My doctor said that I wouldn't be able to walk for the first three months and I could start walking slightly only after six months after the operation. And to be able to run, on the other hand, I was told to wait for a year. However, I started to walk 30 days after the operation. By the 52th day, I was running in a semi-marathon. And after that, I began to exercise again. The biggest factor in my quick recovery is that I had been devoted to sports beforehand. As my muscles are really strong, it is easier for me to bounce back in a short time. " Zülfü Karabulut started to serve as a trainer in Antalya with the support of the former president of the Triathlon Federation, Hamdi Güneş. Founding the triathlon infrastructure in Turkey, Karabulut trained more than 10 athletes for the national team. He also said that five athletes he has trained will attend the Balkan Championships that will be held July 8-9.

Stating that he has kept his career as an athlete alive while working as a sports trainer, Karabulut stressed one more time that he took the Turkey Championship in 2016. Upon breaking the record in Turkey as the youngest man in the "Ironman" competition, Karabulut said he decided to be a professional athlete in the category thanks to the support of his sponsor.

Stating that all of the professional athletes in the Ironman competition represent their respective countries, Karabulut said, "Those who participate in 'Ironman' are the best athletes from their countries and exhibit a perfect performance. Like them, I also wanted to represent my country as an athlete. In the competition entitled, 'Pescara Ironman 70.3,' my name was announced as the representative of Turkey. This was a great honor for me. I broke new ground for Turkey, becoming the first professional athlete to ever represent Turkey as 'Ironman.' In this category, I swam 900 meters, biked 90 kilometers and then ran 21 kilometers. It was a difficult but joyful performance and a great experience for me. I ranked 15th, even though it was my first competition. This is a truly great rank. I completed the laps I mentioned in four hours and 29 minutes, representing my country in the best way possible."

Stating that his next goal is to rank among the first five in the Ironman competitions and earn a spot at the World Championships, Karabulut is working for the competitions to be held in France and Antalya in August.