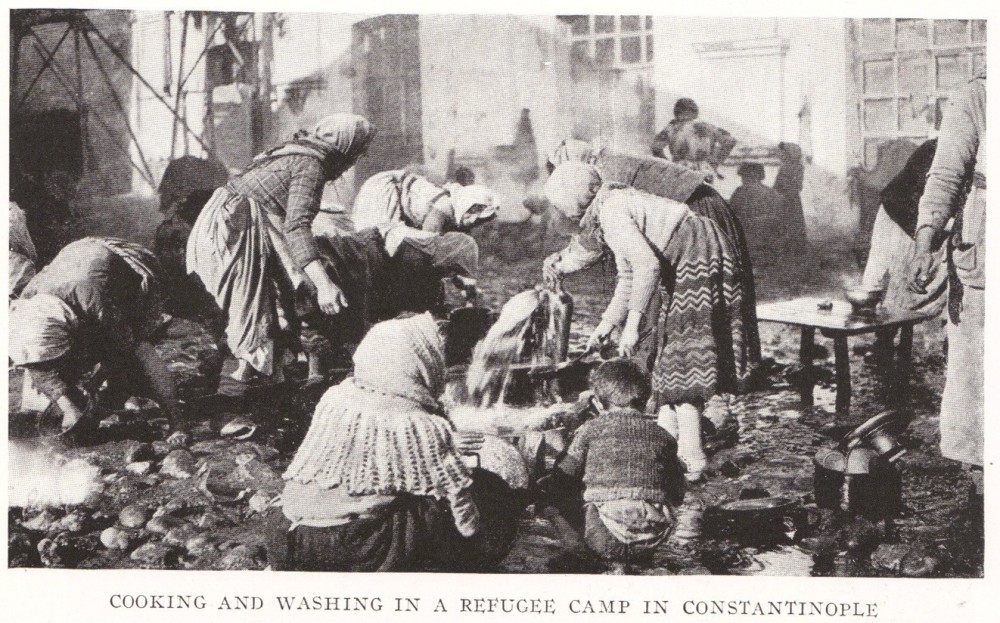 The supporters of the tsar fleeing the Bolsheviks took refuge in Istanbul under great difficulties. Among them were people of all stripes, including generals, famous artists, professors and businessmen

World War I and poverty brought the end of tsarist Russia. Despite siding with the victors of the future, Russia gave up before the end of the war and pulled out. In February 1917, the tsar was overthrown by moderate socialists and a temporary government was established. In October, the revolution organized by the radicals drove the country into civil war.

Who would have thought that the Russian tsar would lose his crown and throne? But not all the Russians did what their neighbor to the south had done. They did not accept the fall. They fought to save and enthrone him once again. The country was divided into the Red communists and the White tsar supporters.

The Whites gathered around the Don River where the Cossacks, relentless opponents of communism, lived. Former officers, nobles, Christians and adventurers always flocked there. At first, a volunteer army of 4,000 people turned into the White Army with hundreds of thousands of soldiers. This is not related to the Slavic country Belarus.

In the meantime, fearing the possibility of the tsar's rescue, the Reds executed the tsar and his family by firing squad in Yekaterinburg in July 1918.

The White Army, ruling north of the Caucasus, was defeated in October 1919 while marching to Moscow under the command of Gen. Anton Denikin. The Whites, the Imperial Army, took refuge in Crimea. Gen. Baron Pyotr Vrangel, commander of the tsar's guard regiment, took command. In March 1920, the White Army of 200,000 broke off against the Red Army of 600,000 soldiers. The Reds entered the Crimea in November 1920.A ray of hope

The Allies, especially Britain, did not make a move for the tsar. However, they helped the evacuation of the Whites. Thousands left their homeland, leaving their belongings and hopes behind and set sail on the Black Sea from ports in Odessa and Sevastopol. Many people who stayed behind were slaughtered. The number of escapees is estimated at around 860,000.

The refugees, consisting mainly of the upper class, arrived in Istanbul, which was under Allied occupation at that time, three days later. For this purpose, more than a hundred vessels approached the port. The refugees were placed in various tent camps in Istanbul. Strangely, the Allies did not think about sending the White Army volunteers on to the Bolshevik-friendly Kemalist movement.

The streets of Istanbul were filled with Russians, Ukrainians, Georgians, Circassians, Tatars and Azeris fleeing the Reds. Beyoğlu turned into a Russian city. Some 185,000 people came to the city with Vrangel alone. Tsarist Russian refugees constituted 20 percent of Istanbul's population at the time. The nobles, the bourgeois, circus acrobats and servants traveled side by side on the same vessels. Here they shared a similar fate.

The Ottoman government did not spare the aid they could provide under difficult circumstances. Russian lawyer and Duma member Nikolay Chebyshev wrote in his memoires, "The immigrant Russians have not felt as much in their homes as in Istanbul, even in the embracing Slavic countries." A refugee later said, "While fleeing from Russia, we always thought that the only country that opened its doors to Jews who escaped from the Spanish Inquisition was Turkey in 1492. They would not turn us away."

A large number of people and charities extended a helping hand to the refugees. They tried to provide infirmaries, a place to stay, work for the unemployed and food. A symbolic Zemstvo (local council) was set up to help the refugees.

In addition, the Russian Communications Bureau in Beyoğlu tried to reunite lost families.

The Committee for the Training of Russian Youth in Exile, established with tsarist academy members, trained children and provided them with high school diplomas to go to European universities, and most of them could go to Europe or the United States for education. Countess Vera Tolstoy said, "During the French Revolution, the nobles taught the executioners how nobles die. We will show them how to live."

Those who were able to get their suitcases were selling the jewels they had brought with them, as well as their furs and goods, to buy bread. Fine china, silverware, tablecloths, bedclothes and daggers decorated the windows of second-hand shops. The goods they brought the most were gramophones and samovars. Refugees had plenty of useless rubles minted in the places held by the White Army. The children of Istanbul played for years with these magnificent, but worthless banknotes that a picture of the tsar and a double-headed eagle on them.

The young officers worked as porters, salesclerks and butlers on the streets and slept in bunkbeds in the camp at night. They were given food consisting of soup and bread. While some thoughtfully paced the Grand Rue de Pera up and down in their Cossack uniforms, officers from the White Army mechanic troops worked as taxi drivers, an old officer played the violin in a casino and a math professor sat at a restaurant counter.

The concierge of the hotel could be a general while a waiter at a restaurant could be a countess. There were also those working as peddlers, finding their way in a den and living in the streets as beggars. The play "Tovarich," which was also shot as a film, depicts the tragicomic events experienced in those days.

The first mixed sea bath in Istanbul was opened by the fleeing tsarist Russians. Europeans were beach enthusiasts. The occupier police neither interfered with beach activities, nor allowed the Ottoman police to interfere.

The restaurant business in European terms was introduced by the tsarist Russians. The Whites taught locals how to make borsch soup from cabbage and beats. The most famous restaurants they opened were Muscovit, Rejans and Turkuaz in Istanbul and Karpic in Ankara. The Turks also got accustomed to cakes thanks to the Whites. The 24-hour Petrograd pastry shop was very popular among intellectuals and had a bohemian atmosphere.

Since the Russians cut the hair short and tied a cloth around their heads to avoid being infested with lice while onboard ships, this hair style, called the Russian head, was in fashion. "Horosho," which means "good" in Russian, was used by locals to address the White Russians, especially the girls. Some ladies were afraid to lose their husbands to the pale-skinned, blond and blue-eyed Russians, and newspapers were filled with cartoons about it.

Tsarist Russians were renowned for their work in the entertainment industry. Russian folk songs had Turkish lyrics set to them and they were constantly sung by locals and the Kazaska show became very popular.

When the Treaty of Lausanne was signed and Istanbul was taken over by the Ankara government, the Whites got worried since Ankara was a friend of the Bolsheviks. In 1923, the Russian Embassy in Beyoğlu was overtaken by the Reds. The Ankara government began to press on the Whites to leave the country. 1927 was the last date they were able to get residence permits.

The tsarist Russians, who thought that dark days were ahead, immigrated to countries where they could get visas such as Hungary, Poland, France, Britain and the U.S. The League of Nations gave Nansen (stateless) passports to the refugees. By the 1930s, tsarist Russians were still in Turkey.

In Gallipoli, Pyotr Nikolayevich Wrangel's army of volunteers who still practiced with the dream of overthrowing the Bolsheviks was also deported. These officers and soldiers, who were sent to Serbia and Bulgaria, were employed there in construction. Wrangel himself died in Brussels. The current Russian president, Vladimir Putin, brought Denikin, who died in the U.S., to Moscow many years later.