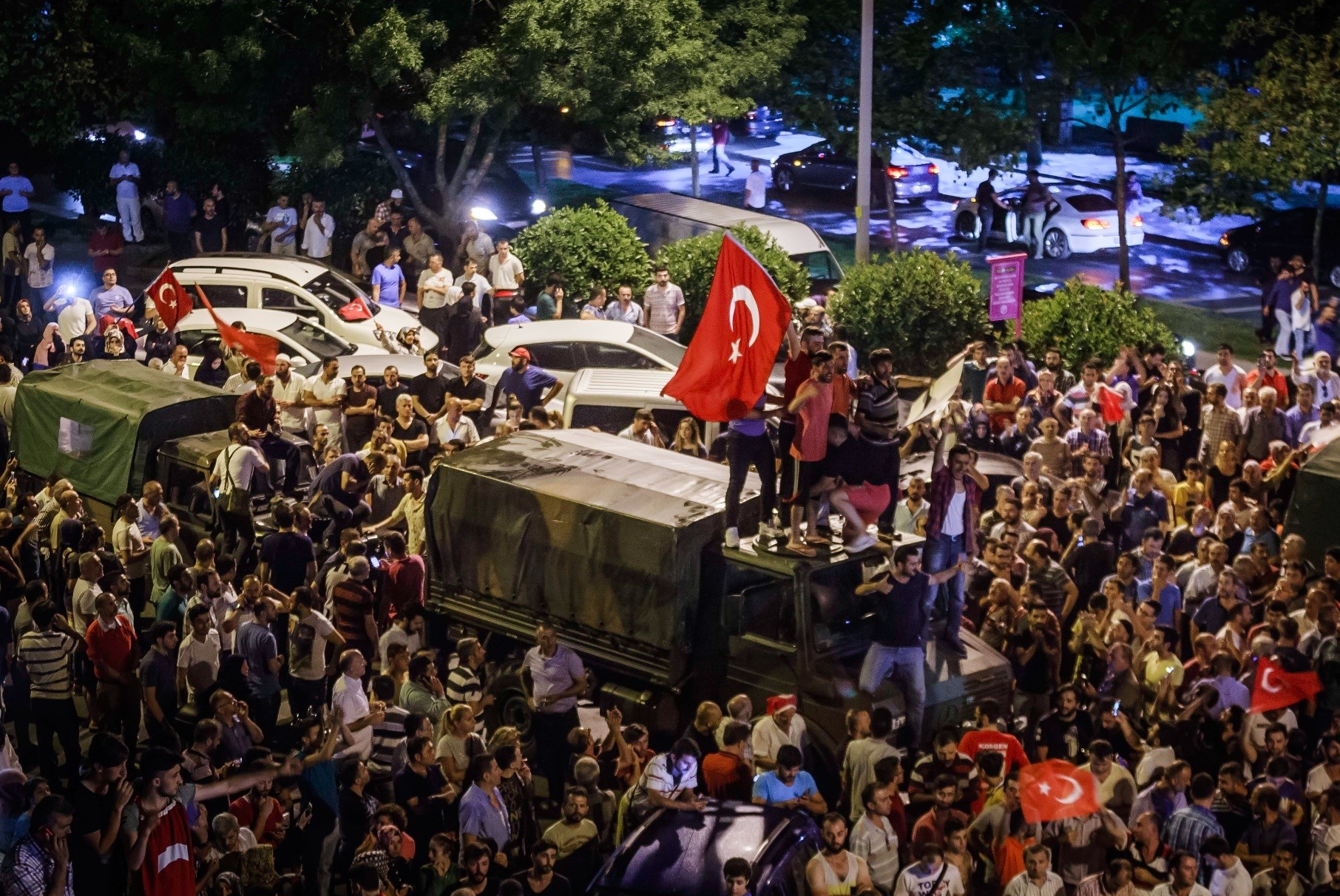 The coup plotters who wanted to take control of the headquarters of the Justice and Development Party (AK Party) in Ankara were repelled by ordinary citizens on the night of the coup attempt on July 15, 2016.
by Fatima Abushanab Jul 19, 2017 12:00 am

The July 15 failed coup attempt was, in a sense, a second independence war during which the Turkish people stood in solidarity and repelled the terroristic and traitorous acts to protect democracy and the homeland

What we lived through on the night of July 15, 2016 was an important lesson in world politics. The people of Turkey stood in solidarity to defend the nation from terrorists who attempted to suppress and oppress the will of the people. The traitors were met with a force they neither expected nor witnessed before. Historically, it was the second independence war to protect the homeland from terror and treason.

Turkish people sacrificed their lives to defend not just their nation, families and friends but also the faith many are so willfully and strongly attached to. This faith is the religion of Islam and more. The driving force of our democracy, rights, and fight against terrorism is our faith. That night, it was clear that Islam is the shield of the Turkish people.

Carrying this message to the world was even clearer. Turks are a fearless nation that will risk anything not to let their independence be taken away, even if that might mean sacrificing their lives. On that night, 249 of our believing, righteous men and women, without blinking an eye, took to the streets and stood barehanded against tanks, F-16s and machine guns.

Their blood was not spilled in vain because they are the heroes, the martyrs and the blessed beings whose souls will live forever. They were the secret hidden saints of the Turkish nation who came to the rescue just at the right moment. That defining moment will forever be the marker of their sainthood.

We are truly blessed to have been guided on that difficult night.

But we must also be cognizant that the coup attempt in Turkey was neither the beginning nor the end of the series of problems engulfing the Muslim world. It is reflective of a universal struggle that has added momentum to the many waves that will generate a ripple effect among the oppressed.

Yes, July 15 is the proud day of the Turkish nation that strongly dissolved a major terror attack in the form of a coup attempt on democracy, human rights and freedoms. This day was a day of bravery and the courage to defeat terror. But the success story and the legacy that the martyrs left behind does not belong only to the Turkish people.

The success story of July 15 is also the destiny awaiting millions of oppressed and marginalized individuals around the world.

It is time to stand up to terror and put an end to the suffering of justice. Be it in Syria, Palestine and Iraq to Afghanistan, Myanmar, Egypt and Qatar, as well many other nations from the west and east to the north and south.

One heart-wrenching case that is close to home here in Turkey is the suffering of our brothers and sisters in Egypt. They fought for their independence, yet the coup, headed by the despicable general, now President Abdel-Fattah el-Sissi, managed to achieve dictatorship.

The people of Egypt have experienced the same exact terror that we, the Turkish people, were able to avert last year. Terrorist coup plotters whose aim was to destroy democracy in Egypt have jailed President Mohammed Morsi, the democratically elected leader of Egypt. Were they successful? Some might speculate that Sissi standing side-by-side with U.S. President Donald Trump during the latter's visit to Saudi Arabia to be a demonstration of "strength and secularism."

Today, despite the fact that Morsi is in jail, democracy and Islam are still the hope of the Egyptian people. They will make a comeback that is so great and so big that it will be another critical lesson in world politics.

As to the question of why that will be the case, it is actually not so complicated. Terrorist coup plotters like Sissi and others forget to include a factor in their long-term plan. Faith always wins. No matter how much a believer is oppressed, suppressed or marginalized, their faith only grows stronger. At the right time and right place, that faith will drive people to take the right action.

This is exactly the kind of freedom and independence Turkey fought for on July 15. The Turkish people acted on instinct with their faith as the driving force. The fact that Turkish people sought their rights, against merciless terrorists and their guns and tanks, showcases once again that Islam and democracy are inseparable.

Democracy has always been sacred because it serves to advance the rights and freedoms of all people regardless of political orientation, ethnicity, religion, language or gender. The freedoms that Islam as a faith promotes in Turkey are a form of Islamic democracy that is for the benefit of everyone. It does not limit nor deter anyone from living their choice of lifestyle.

The Turkish people are a believing nation. They fought for their second independence. We hope the Egyptians will bring forth their new dawn of independence soon. No doubt, Egyptians will also find the willpower to achieve what Turkey did on July 15.

The Egyptians' restrained patience and ever-growing faith will soon manifest in a victory that will give heed to the world that Islamic democracy, indeed, will win in the end.

It will win in Syria and Palestine as well as in other nations in the years to come, although it will take patience and struggle.

Another example of resoluteness and bravery is in Qatar's strong stance against the "Gulf coup." What the Qataris experienced will only make them stronger, more astute and visionary just as Turkey has grown into a wiser and more established democracy that is faith and value based.

Democracy is the hope of the world, especially in Muslim nations. A democratic model does not always have to be Anglo-American. It can include many colors, views and embrace religion instead of being exclusionary to faith.

That is what the Turkish nation proved on July 15, and, hence, many others can do the same. Until then, our prayers are with all believers around the world. We will not be divided and our call for Islamic democracy will never be silenced.