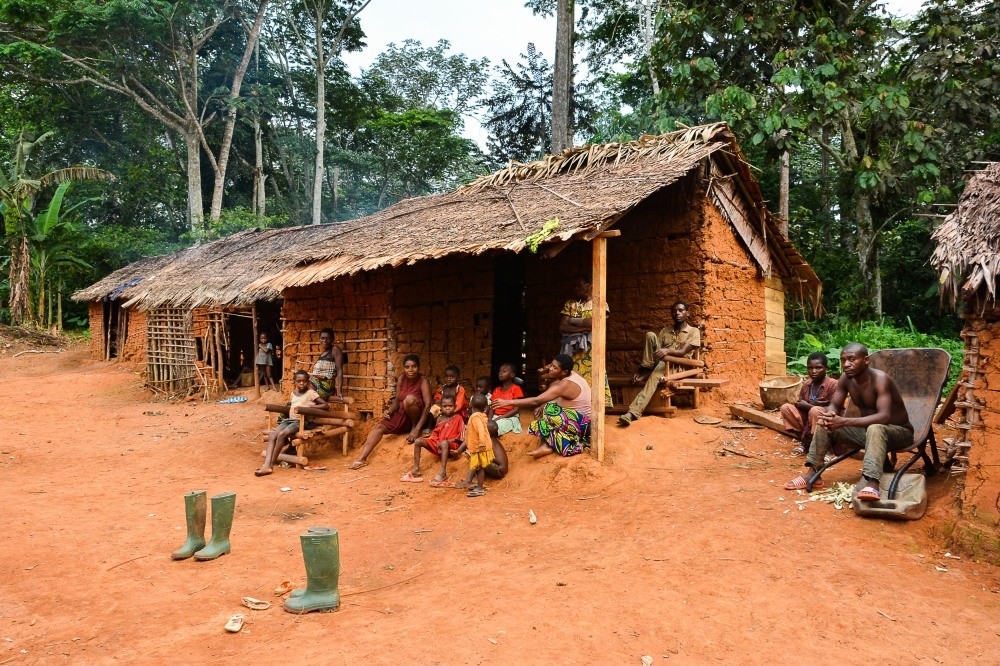 The Pygmies in Cameroon have lived away from modern life for centuries. Despite still being strongly attached to their old ways, they have started to welcome aspects of other cultures, including Islam

Neighboring the Atlantic Ocean, the forested lands of Middle and West Africa are home to Pygmies, which are known to be the shortest people in the world. Despite thousands of years having passed, Pygmies attract attention of the world with the primitive lifestyle they have preserved since the "first age."

There is not any solid information about the origin of Pygmies, who lived in the region for approximately 5,000 years and have been shown to be one of the oldest inhabitants of Africa.

These indigenous people, who are about 120 centimeters tall were given the name "Pygmy" which means "dwarf" by the Europeans. Pygmy men are approximately 10 centimeters longer than their women. With their curly hair and fuzzy bodies, Pygmies differ from other groups and sport broad chins, flat noses and large eyes.

It is assumed that today there are about 120,000 Pygmies in the world. Most of them live in a forested area, close to the Atlantic Ocean, in Cameroon. Smaller Pygmy groups are found also in Rwanda, Burundi, the Central African Republic, the Democratic Republic of the Congo, Zambia, Gabon and Angola.

Pygmies in Cameroon are separated into two groups, Baka and Bage Pygmies. Baka Pygmies spend their life in the undiscoverable parts of the forests out of the public gaze, while Bage Pygmies live together with the Bantu people, who consist one of the largest tribes in Cameroon and live in areas near forestlands. The Pygmies which are more interested in living the settled life are Bage Pygmies.

Living in small groups, Pygmies construct temporary cottages to live in by using bamboo trunks and large leaves they gathered from other trees.

Pygmies, who do not like connecting with outsiders and being photographed, lead a different life from the settled people of the Africa continent. They do not keep pest other than dogs and do not practice agriculture as they constantly move.

Still leading a primitive life, Pygmies spend most of their time hunting in the deep forests and gathering fruit plants.

Not using any form of money, Pygmies interchange products they hunted and gathered with other groups in return for their needs. By organizing various contests, they teach their children hunting and gathering.

The Pygmy people follow the job-sharing method to meet their daily needs. Women keep busy with fishing and construction of their cottages, while men go hunting.

Moving often to be able to find game animals, Pygmies prepare wooden and stone arrows and spears to hunt monkey, antelope, gazelle and elephants. They are also famous for their mastering of climbing trees.

Under the context of the programs, Pygmies are given education in various areas such as agriculture, apiculture and animal breeding.

Although they have been accepted as citizens of the countries they live in over time, they still cannot benefit from many social services like health care.Regulating their social life according to highly complicated rules, Pygmies generally prefer persons out of their tribe for marriages.

Although polygamy is not forbidden, it is rarely seen within their culture.

The rainforests in which Pygmies live, are being quickly consumed by lumbering and mining. Their living spaces are narrowing down day by day, as they are not allowed to live in forests which are turned into national parks.

Speaking a language called "Mabi," or "Mabea," which is peculiar to them, Pygmies have poems and epic stories which are passed on by the generations.

Worshipping one single god called "Komba" and believing everything was created by him, the Pygmies also believe in an afterlife.

As they believe that the souls of their ancestors are everywhere, they conserve dead bodies inside tree barks and caves.

There is also a Muslim group within the Pygmies. Makure-1, with a population of 30 people, is the only Muslim Pygmy village. Located in the forested area near Cameroon's Kribi city, the Muslim village has two mosques which teaches the Quran as well.

In the aftermath of a visit by Qatari religious authorities in 2004, at first three persons converted to Islam. Then, after visits by Turkish nongovernmental organizations in 2009, all the Pygmies in the village converted to Islam.

İsmail Nzie from the Bantu tribe is teaching Muslim Pygmies about Islam. Speaking to an Anadolu Agency (AA) correspondent, he said: "I can empathize with them since I converted to Islam later on in my life. Hence I am trying to teach them Islam in a way that they can adapt it into their daily lives."

The chieftain of the Muslim village, Haruna Fouer, said the first man to convert to Islam in the village took the name "İbrahim," and people in the village started to convert as well. Chief Fouer said they had no knowledge about the monotheistic religions as they have no contact to the outside world before.

One of the villagers, Abdullah Gounde, said he was previously introduced to Christianity and accepted this religion even if it did not make sense to him in the first place. "When I became a Christian, I was not a very religious man. However, my life completely changed when I converted to Islam. Now, I believe that there is a one and only creator - God - and I act according to it," he added.