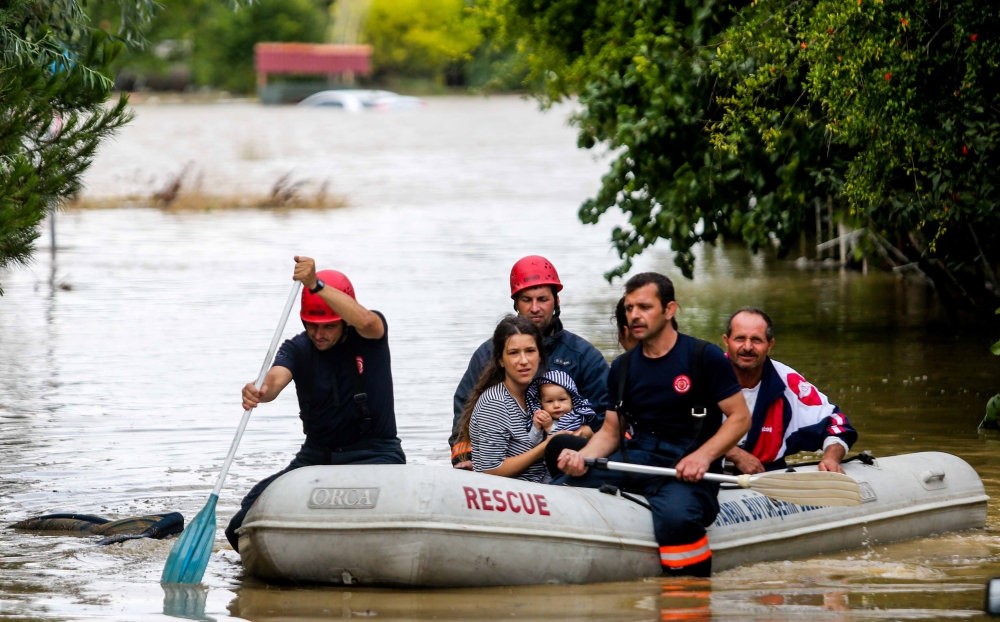 Fire fighters of Istanbul Metropolitan Municipality rescued people who trapped in their house due to flood with boats on July 27.
by Jane Louise Kandur Aug 05, 2017 12:00 am

In the wake of the biggest storm of the century, the people of Istanbul came together, working to help one another to rescue those in need with a spirt of togetherness and unity that was not a one-off event. One only needs to look back to last year, on July 15, to see a similar spirit of people coming together for the sake of others

On July 27, the rains came. The skies literally opened and Istanbul was subjected to rain, wind and hail; the likes of which hadn't seen in recent memory. Within 20 minutes, 30 to 40 centimeters of rainfall were recorded. The rain was accompanied by walnut-size hail and according to photos shared on social media, some of the hail was as big as the size of an egg - so large it could barely fit in the palm of one's hand. Thousands of cars were damaged by the hail, which broke windshields and caused major damage to vehicles damaged by the stones of ice. Fires broke out on both sides of the Bosporus, including one at the Haydarpaşa docks and another in a depot in Kağıthane.

Trees were uprooted, sign posts were ripped down and rooftops went flying. The park where my children played many years ago was totally destroyed. Not one tree in this green, shady spot, was left standing.

Boards, branches, leaves and hail were all flying through the air. Needless to say, traffic came to a halt and people who were outside sought shelter wherever they could.

Vehicles, houses, crops and industrial facilities all suffered damage and it has been estimated that the damage totaled around TL 500 million ($141 million).

Istanbul overcame the shock quickly. Turkey's Disaster and Coordination Center (AKOM), which coordinates the crews and teams that are dispatched in an emergency, was quick to react. However, in a city of more than 17 million people, of over 5,000 square kilometers, it is naturally impossible for emergency crews to get to all locations at once.

So this is where the real story lies. Images of people holding out their hands to drag total strangers to safety, making room in already overcrowded metro stations, running out in the merciless hail to rescue stranded children, finding ladders - anything they could - to help people trapped on top of buses descend - are the images that remain in the minds of Istanbulites.

Add to these the replanting of a plane tree, more than 180 years old. The city council struggled to save the tree, and as the tree had just been uprooted, they were able to replant it successfully. There was joy all round. 280 seagulls and 30 crows, as well as hawks and other birds, were taken in for treatment after being struck by hail. The people of Istanbul rolled up their sleeves and set out to help any living creature that fell victim to the storm.

One event was particularly striking. In Şişli, the retaining wall of a cemetery collapsed, injuring one passerby and trapping another underneath a pile of rubble and mud. An emergency team quickly arrived to rescue the victim but the task was more than the firefighters could handle without backup. Roads were flooded and stalled cars blocked the way. Backup would be slow-coming.

Everyone knows that there isn't much time for someone trapped under mud and rock to survive. The bystanders did not just stand by. Dozens of people started lifting rocks, digging out dirt with their bare hands. Not only did they not think about their manicures, or their jewelry, they didn't think twice that they too might be swept away by a landslide. They merely dug in.

They dug in under the direction of fire fighters. They rescued the victims. No one knew how many people had been trapped under the wall, so they continued to dig and to listen. When someone thought they heard a voice, silence was called for. Everyone instantly fell silent. A stretcher was brought. However, this proved to be a false alarm. People continued to dig, until it was determined that no one else was under the wall.

The Turkish public worked together in a time of emergency, to form a wall against impending disaster not unique to the storm of June 27.

The same thing was witnessed on the night of July 15. It was this spirit that wrote the epic story of that night. It is this spirit that many other countries viewed with envy. People turned out to face down tanks, stopping them with their bare hands and with their bodies. This was not a night of one person standing up against a tank in a futile gesture of extreme bravery. Rather people - men, women and children - ran into the streets to turn ba

ck the putschists and to defend democracy, their way of life and their future.

There is so much "bad" news about Turkey in the newspapers, news that is not grounded in any type of reality. The Turkish economy is booming, exports are up by 31 percent (the highest in the last six years) and, with every passing day, new laws and regulations are introduced to make people's lives more comfortable and easier. Yet, what is reflected in the international media? Protests by women saying: "Don't interfere with how I dress."

The perception, not subtly made, is that the government, the current ruling party, is interfering with what women wear. Sigh. There are two incidents in question which led to this sartorial protest; one occurred on a bus and another in a park. It is never acceptable that any woman, or man, face any form of oppression about how she (or he) dresses. When a random man on a bus, or an employee of a private security company, decides that it is up to them to create a fuss, this is unacceptable. 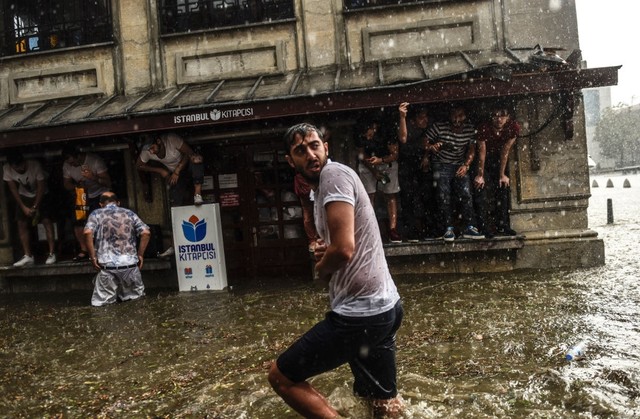 However, such events cannot be laid at the door of the government. Ah, you say, but the government has created this atmosphere. Balderdash! I reply. I have been in Turkey for over 25 years. In the 1990s and early 2000s, not only were women who wore headscarves severely restricted but women who dressed revealingly were subjected too much to more harassment. The problem that Turkey faces in women's dress and behavior is the result of a traditional society that has strong patriarchal tendencies.

To change how a society reacts takes time. However, the current government has introduced many sensitivity - and awareness-raising programs, directed solely at men. Starting from the police and the gendarmerie, there is a serious effort to redress the chauvinistic imbalance. For example, the Istanbul Metropolitan Council has recently banned man-spreading on public transportation. What a great step for a society in which "sitting like an agha" (extreme man-spreading) used to be seen as an indication of power and influence.

Yes, there is a problem with men's attitudes toward women in Turkish society. Although the problems exist, things are getting better. Today, more women are getting more respect than they ever did before. Gone are the days when an elite section of women were afforded respect, with the rest being condemned to the garbage heap. Gone are the days when women were viewed as "spoon enemies" and were expected to cover their mouths and refrain from speaking. Now, more women get more respect from more men. Is this enough? No. But it's a start. When the above situation is viewed alongside how the people behaved on July 27, or on July 15, Turkish society itself takes on a very different light. What the great storm has proven is that the people's reaction on July 15 was not a fluke; it should not have been unexpected. In fact, the reaction of the people, scrabbling through mud, rubbish and rubble to rescue their fellow citizens, is the norm. It is the Turkish reaction. When something bad happens, they are there to help. They don't look in the other direction, feigning interest in a shop-window, whistling as they walk past. They dive in, wanting to aid and assist in any way possible.

Most Turks were not surprised on July 15 last year. No one was surprised after the storm. They expected no less from their fellow citizens. If this is the norm, and it certainly seems to be so, why was the Western world so surprised by the reaction of Turks? The West was taken aback because for years the West, its media outlets and its thinkers, have misinterpreted Turkey. Intentionally perhaps, perhaps not. For whatever reason, there is scant regard for the reality of Turkish society. Yes, there is polarization. Show me one country where there isn't polarization. America? The U.K.? Any European countries? Yes, in Turkey a large number of people have been dismissed from their posts, are under investigation or are on trial. Yet, this is nothing more than part of the post-coup recovery process.

What is here, and what is missed, is that the Turkish nation is a nation. Although people have, for 90 years, been told that they were unable to acknowledge their ethnic identity and were forced to abandon their Kurdish, Alevi, Arab, Balkan, Caucasus, Jewish or Christian identity in favor of the all-encompassing Turkish identity. These people, who today can proudly acknowledge their ethnicity, have been and are one nation of people. They are proud to be a nation, and proud of their hospitality, their philanthropy, their civil-mindedness and their democracy.

The Turkish nation has been consistently underestimated since the beginning of the decade, perhaps even longer. It is time to acknowledge that the Turks are excellent at unifying when necessary. They might bicker about day-to-day things, women's rights, workers' rights, the economy and other things. However, at the end of the day, isn't this what democracy is all about? If everyone were to agree on everything, we would truly be living in a worrisome world. Turkey exudes a level of unity and togetherness that should be the envy of many countries. The disagreements, debates and various dialectics which divide us, only make democracy stronger.

Many commentators have referred to the spirit of July 15 but this spirit is greater than that of July 15. It is the spirit of the Turkish nation, of all the myriad of ethnicities that come together to work for their common goal. The spirit demonstrated last year and this year is nothing less and nothing more than the Turkish spirit.