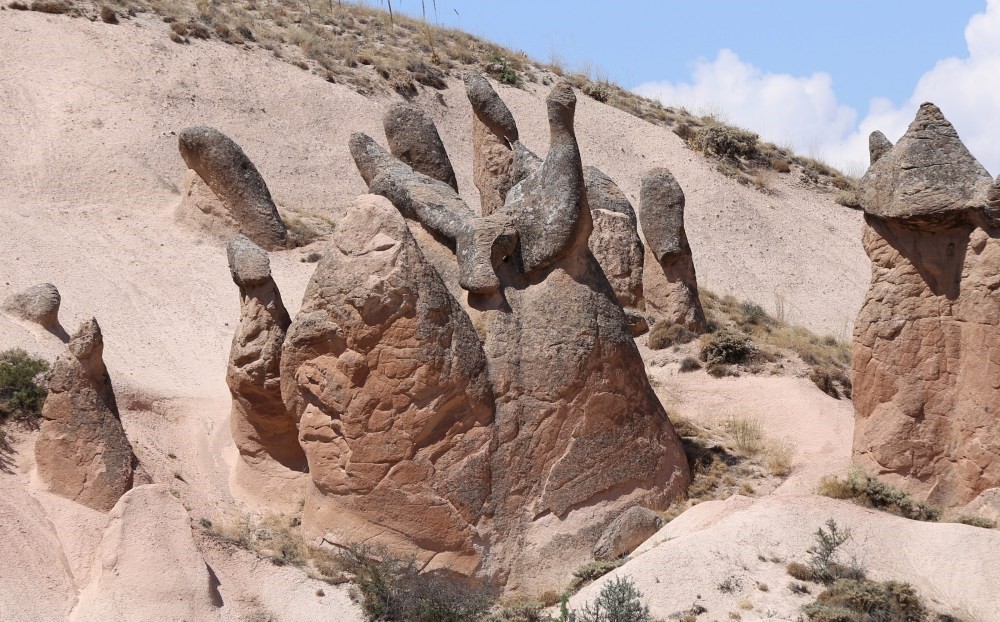 Cappadocia is known for its fairy chimneys, Roman remains and cave churches, but Devrent Valley, located in Göreme, offers visitors a chance to immerse themselves in a whimsical, natural wonderland

Unlike Cappadocia's intricate relationship with ancient civilizations, Devrent Valley, located in the same region, has remained primarily untouched by man. Though it lacks the ancient mark of people, the valley has become a favorite for visitors thanks to its extraordinary rock formations.

Devrent Valley hosts a multitude of rock formations and is only a 10-minute drive from Göreme. The small fairy chimneys in the valley seem to form a lunar landscape, or moonscape, thanks to their unusual shapes. The valley also has many animal-shaped rocks, creating a natural sculpture zoo. Some of the most famous, or the easiest to distinguish, animal shapes are the camel, snake, seals, and dolphin, but if you let your imagination run wild, you can find many more. There is even a rock pillar that resembles the Virgin Mary holding Jesus Christ.

Scattered throughout the region, the fairy chimneys are actually cooled lava originating from Mount Erciyes and Mount Hasan that has eroded over time to create truly unique formations. The creature-like rocks in Devrent Valley, near Nevşehir's Avanos region, go even further to inspire visitors' imaginations.

Professional tour guide Ülkü Yılmaz spoke to Anadolu Agency (AA) saying the Devrent Valley is one of the most popular spots for Cappadocia tours.

Stating that thanks to the extraordinary rock formations, the fairy chimneys in the valley attract more tourists than any others of their kind in the region, Yılmaz added that people are also usually curious about the era in which they were formed.

While the chimneys in Cappadocia's other regions are generally conically shaped earning them the name "fairy chimney," the ones in Devrent Valley vary, allowing visitors to decide for themselves what the formations resemble. The Virgin Mary statue, along with formations mirroring a camel and crocodiles, stand ready to capture everyone's imaginations.

Over time, the thousands of visitors scaling the formations for photo ops have started to take a toll on the rocks. As a result, some areas have been fenced off by the Provincial Directorate of Culture and Tourism for preservation.

"Although people generally know that these are natural formations, some visitors still ask who actually carved the rocks. They assume an ancient sculptor came and worked on them. However, all of these are totally natural formations free of human interference. They are not the work of any sculptor, but the work of nature. I think the area should be more restricted, only to be observed and appreciated from afar. Visitors climbing on them should be strictly prohibited," said Yılmaz.

İbrahim Halil Ot, from Milano, Italy, chose the Cappadocia area for his holiday this year. He expressed his admiration for the valley's natural formation and said he will show his videos to friends and family back in Milano.

"I was awestruck by the formations. You get curious about how these were formed. They are not like human work. They were given to us by nature," said Ot.

Neslihan Vardan, a visitor from Istanbul, stated that the formations stretched her imagination, while expressing how joyful it was to wander around the interesting formations. Agreeing that the valley has an extraordinary beauty, Vardan stressed it needed protection.

"In fact, your imagination decides what the formation is to you. However, some of them are quite similar to specific figures. For example, in some you can see a camel, penguin and a dancing couple. I think that these must be protected. They are not just ordinary natural wonders," said Vardan.

Another visitor, Hasan Yıldırım, said he wants to be photographed next to all of the formations, and that the valley has tourism potential all by itself.