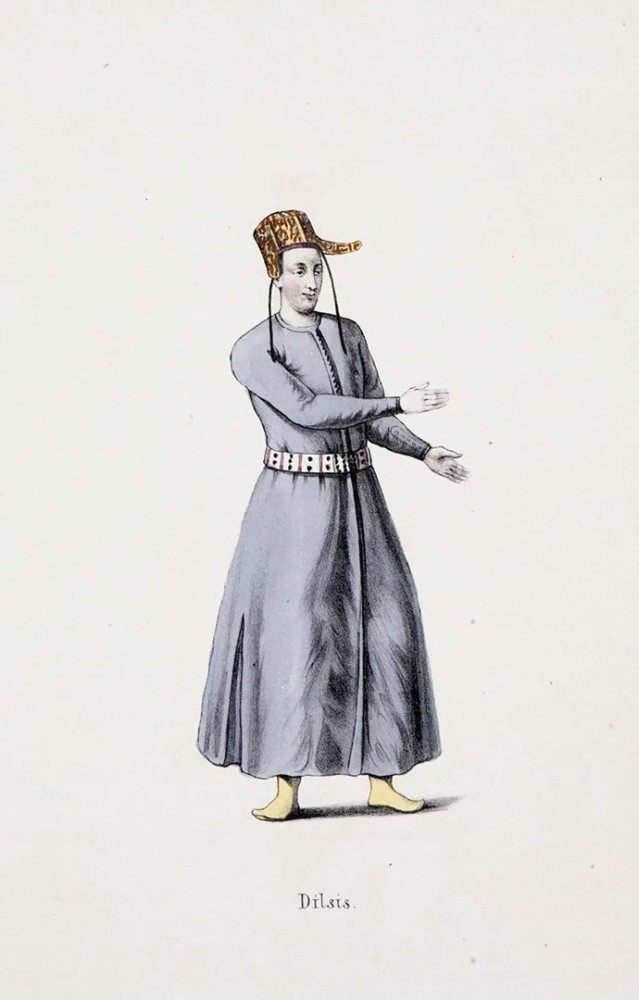 A drawing of a mute servant in the Ottoman court, who had specific signs and hand movements to communicate with others or between them, which was called u201cthe language of the mutes.u201d
by Ekrem Buğra Ekinci Aug 18, 2017 12:00 am

In modern-day Turkey, mute officials serve in Parliament and in the Cabinet, and the reason for this is the concern for privacy about state affairs, which has a history dating back to the Ottoman era

Mutes used to serve in the Ottoman palace and were employed especially for preserving the privacy of negotiations conducted between the sultan and bureaucrats. They served during negotiations and carried files. Although they could easily appear everywhere, they did not pose a risk in terms of leaking state secrets as they were deaf and mute. This method was inherited by the Sublime Port, where the Ottoman cabinet was gathered and sustained up until now.

Mutes were mostly called "bizeban," which comes from Persian. They had been employed for the inner part of the palace called Enderun where the sultan's offices have been since the time of Sultan Mehmed the Conqueror. In the late 17th century, there were about 10 mutes employed in Enderun. These mutes were never promoted to higher ranks.

In addition to the mutes serving within Enderun, there were also mute officials among the doormen and executioners in other parts of the palace called "Birun," which means "outside" in Persian. This shows that this method was applied not just for concerns of secrecy, but also to prevent these servants' communication with third parties and bribery. For instance, mute executioners could not listen to the appeals and promises of the convict.

Mutes had specific signs and hand movements to communicate with others or between themselves, which was called "the language of the mutes." All the palace people learned this sign language. They communicated with this sign language, as silence was essential in the palace and it was disgraceful to talk in the presence of the elderly, especially the sultan.

Using sign language became popular in the palace. Even at other times, people of the court told stories to each other in sign language. Most likely, Sultan Osman II (1618-1622) was the first Ottoman sultan to learn this sign language. During the 17th century, the number of mutes in the palace reached as high as 100.

Almost all sultans preferred sign language. When the sultan wanted to say something and did not want it to be understood by anyone during negotiations on state issues, he could say it to the mutes in sign language.

Employment of the disabled

There were also dwarves in the palace. These smart people were generally busy with work that did not require a perfect body. For example, they served as library officials at Enderun. The skillful got promoted and served in financial positions at hospitals. There were some who served as the courtiers of the sultan thanks to their witty conversation, soft words and even worldly knowledge.

It is also known that eunuchs served as discipline officials in the Harem - the residence of the sultans and shahzades, their mothers, wives and children - and Enderun and were promoted to higher ranks such as general director of foundations. No matter what the reason, this centuries-old precision for employment of the disabled attracts attention.

Ottoman political organization was rearranged during the reign of Sultan Mahmud II (1808-1839). The mutes in the palace started to serve on the councils founded during the Tanzimat era, which started in the early to mid-19th century, and especially on the cabinet. To be able to communicate with these mutes, grand viziers, ministers and civil and military servants in their employ had to learn this ciphered language.

Even in the last days of the Ottoman Empire in 1922, there were four veteran mutes who served at the Ottoman court for many years in Babıali. Today, mute officials still serve at secret cessions of Parliament and Cabinet meetings.

As is the case for all disabled, the status of mutes, who were called "akhras," was regulated in Ottoman law. Prophet Muhammad said that a person who lost any of his organs would be rewarded with entrance to heaven in return and added that telling about what is going on to the mutes is equal to almsgiving. In fiqh (Islamic jurisprudence) books, there are detailed rules on mutes. In Ottoman civil code, Mecelle, there were rules on the issue.

Mutes were responsible in decrees as much as they could understand and were capable of doing. During legal actions, their sign language is taken into consideration. They can conduct all kinds of contracts in sign language, they can marry and divorce and buy and sell goods. Their testimony, on the other hand, is legally accepted only under specific conditions. They could not become judges or rulers.

"God fortifies the other organs of a person who lost an organ," it is said. The mutes in the palace were extremely delicate and smart people with quite strong memories. They had the capacity to recall incidents to the smallest details. They told of the historical incidents and famous figures by using their unique sign language and with a narration over shading well-spoken men thanks to their expression.

They were incomparable to any artist in terms of the perfect caricature and animating of famous figures in the incidents they experienced. For example, it was understood that they meant the sultan when they took their right hand on their head, separating their fingers like a plume. When they raised their right hand raising their index finger in a symbol for one, they meant the grand vizier.

When they wanted to say Shaykh al-Islam, they described the long sleeves of a robe reaching up to the Shaykh al-Islam's knees by holding their own sleeves of the right arms and leveling it down with their left hand. They also turned their right index finger around their head a few times like tying turban.

To describe the war minister, the right arm was taken on the left in imitating the "shoulder arms" movement strictly. If the palm of the right hand was opened horizontally and the person blew on the palm as if it were a sail, it was understood that the mute wanted to say navy minister. To talk about the interior minister, it was enough just to put the right hand on the breast and make a scrubbing motion signifying the internal organs.

For the Foreign Ministry, since it was in a position related to foreigners and European states, they made a cross by overlapping the two index fingers and then took that cross to their forehead. If they acted as if they were holding scales, they were talking about justice minister. On the other hand, when they brought their two wrists together as if handcuffed, they meant the chief of police.

Unfortunately, we do not have detailed information about this sign language that descended through the centuries. However, the School for Mutes founded by Sultan Abdülhamid II 120 years ago possibly sustained this tradition of sign language. Hence, it can be said that the Turkish sign language used today is a continuation of Seraglio sign language.