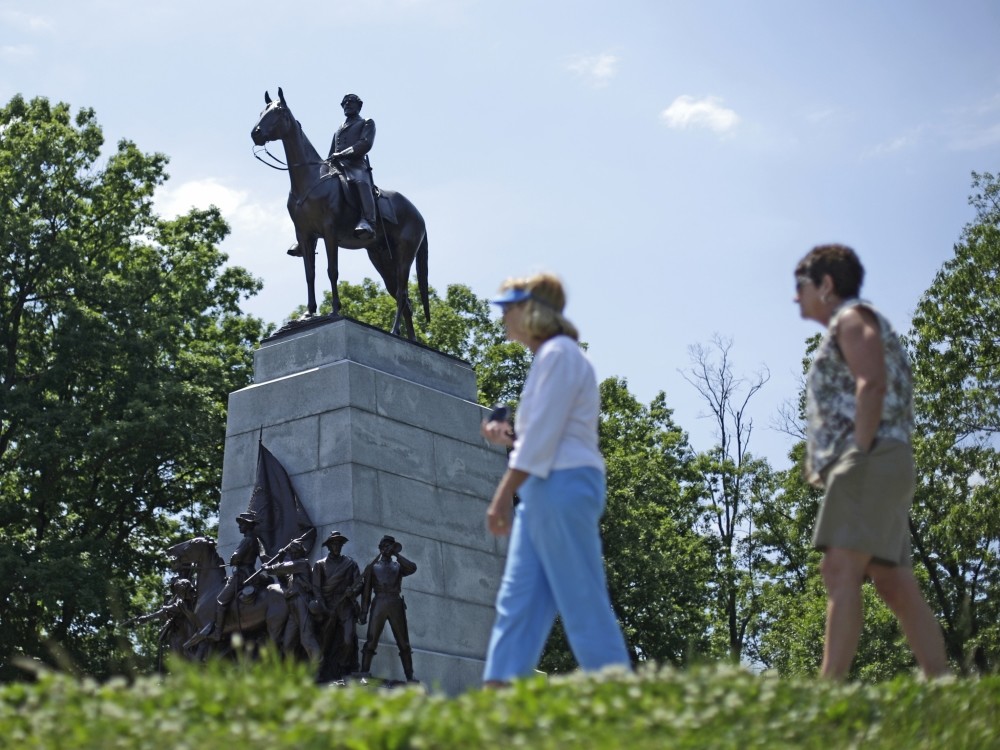 Growing up in Gettysburg, one of the most iconic places in American history, one is exposed to symbols of the Confederacy on a daily basis, but Gettysburg’s landscape bears the traces of racial discrimination and segregation that haunt the U.S. still today

I grew up in the best-known small town in America. Gettysburg is home to over 500 acres of battlefields that were the stage for the bloodiest scenes in American history, when the Union Army successfully prevented the Confederate campaign from heading further north, a turning point in the Civil War.

While I am proud of my hometown and its historical significance, it has given me a unique perspective to look at the state of the U.S. following the horrific events of Charlottesville.

Since childhood, I have walked each day past buildings lodged with bullet holes, greeted re-enactors in the street, and crossed fields that once served as mass graves.

But growing up in Gettysburg has also meant being surrounded by Confederate propaganda to the point that symbols of hate were so ubiquitous, they became almost unremarkable.

I have walked each day past proudly raised Confederate flags, greeted acquaintances sporting "heritage not hate" T-shirts in the street, and crossed fields that now serve as home to Confederate monuments.

While some have argued that there is a difference between Confederate monuments in public parks and battlefield memorials, it is important to recognize that many of Gettysburg's monuments rewrite history, revising the past to communicate a specific message. That message is inherently racist.

More reminiscent of the eras in which they were created than of the era they were meant to evoke, the statues were built to legitimize racist policies during several periods of systematic state-supported disenfranchisement for black Americans.

Most of the 30 Confederate tributes in Gettysburg were erected during the period immediately after the Civil War, known as Reconstruction, and during the early 20th century, when the U.S. saw the proliferation of Jim Crow laws legitimizing segregation.

They were built in the service of maintaining white supremacy and offering an alternative idealized narrative of the Civil War.

Dedicated in 1933 by the United Daughters of the Confederacy, an organization dedicated to glorifying the "Southern Cause," Gettysburg's Alabama State Monument is emblematic of the way revisionists employ memorials to alter the historic narrative.

The monument features a female personification of "The Spirit of the Confederacy," flanked by two soldiers. She is a beautiful Romanesque figure in a flowing bronze robe, pointing forward with one hand as the other rests on the shoulder of a wounded Confederate soldier." "Alabamians!" reads the monument's lettering, "Your Names Are Inscribed On Fames Immortal Scroll."

Representing the spirit of the Confederate cause as a beautiful woman distorts a much more sinister historical truth.

Additionally, several of Gettysburg's memorials were built in the 1960s and 1970s, including the state monuments for Louisiana and Mississippi along Confederate Avenue.

They were raised deliberately and defiantly during the American Civil Rights movement, and read that Confederate states were fighting for a "righteous cause" and the "sacred heritage of honor."

Thousands of soldiers young and old lost their lives on the battlefields of Gettysburg during those blistering hot days in 1863.

Most of the men gave their lives fighting for causes that they believed in, there is no denying that. But history has proven that one side's aims were neither righteous nor honorable.

Historians agree that the Civil War was fought over slavery, at least in part. Confederate monuments honor those who took up arms against their country in order to maintain the ability to own others as property.

Earlier this week, the Gettysburg National Military Park defended the contentious battlefield monuments, saying they served as "an important part of the cultural landscape."

Yes, the statues represent part of Gettysburg's "cultural landscape." However, this is a landscape of racial discrimination and segregation that haunts the U.S. still today. We should feel no need to preserve a culture that has enforced white supremacy and the disenfranchisement of black Americans.

Confederate memorials are symbols of an ugly history, and putting it any other way is a sanitization of the past.

The events in Virginia make clear that so long as these monuments continue to stand and the U.S. has a president who has demonstrated reckless ignorance of American history, members of hate groups will continue to feel emboldened to stage violent and hurtful events in an effort to preserve vast social inequalities.

President Donald Trump lamented Thursday the removal of Confederate statues across the country on his Twitter account, "Sad to see the history and culture of our great country being ripped apart with the removal of our beautiful statues and monuments."

Trump and those who protest Confederate monument removal do not seem to understand the clear distinction between commemorating history in a learning environment such as a museum exhibition, and glorifying the past though public monuments in parks. There is a reason there are no statues of Hitler in Germany today.

Essential to the process of healing and reconciliation, Gettysburg's Confederate statues should be removed from the National Military Park and placed in museums for future generations to learn of the fissures that led to the deaths of over 600,000 American soldiers.

Through education, we can properly honor all who died on the fields at Gettysburg and beyond, without sanctifying memorials in the spirit of nostalgia for the country's shameful era of chattel slavery.

Moreover, we must justly remember and teach our children about the Civil War. American President Abraham Lincoln said it so eloquently in the Gettysburg Address, "The world could never forget what they [the soldiers] did here."

Lincoln also said that it was the responsibility of the living to expand upon the Union's unfinished work, "which they who fought here have thus far so nobly advanced."

We must fulfill this responsibility. The movement toward equality will only progress once those who fought to enslave others are not venerated atop pedestals.