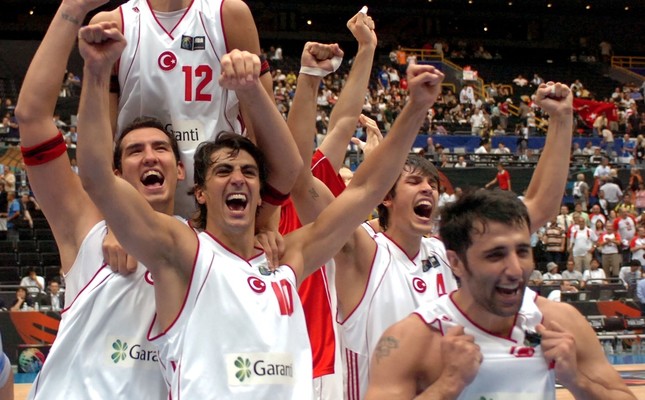 EuroBasket 2017 kicks off tomorrow and as one of the host countries, Turkey is naturally a favorite. With Turkish basketball fans getting ready to chant the famous "12 Dev Adam" (12 Giant Men) song once more, let's take a walk down memory lane to see how the legend of the 12 giants came into being

It all started with a EuroBasket 2001 commercial. Set in Istanbul's iconic Haydarpaşa Train Station, the advert showed a dramatized basketball match between ordinary citizens and the Turkish national basketball players of the time. It started off with two watermelon vendors and ended with an elderly "teyze" (aunt in Turkish), surprising everyone with her basketball skills.

The pacy video was matched with an equally energetic jingle by the Turkish Ska band Athena, called "12 Dev Adam," literally meaning 12 giant men. Within hours of its first broadcast, the commercial went viral; the whole nation was hooked and from that moment on, the Turkish national basketball team would be called the 12 giant men. The jingle went onto become the team's theme song, a song that has united Turkey over the years, revived Turkish basketball and gave birth to the legend of the 12 giant men.

Truth be told, back then, as an 11-year-old girl, I was not into Turkish basketball. My father would often tune into watch the NBA, so I was more familiar with basketball in the U.S. When I heard that the European Basketball Championship, better known as EuroBasket, would be held in Turkey in 2001, I was little intrigued. After all, the Turkish basketball team had been going through a rough patch over the years or so I thought. The news was out that Turkey has been waiting for this generation of Turkish basketball players, who later became known as the generation of 79' and that news was enough to get me excited.

Turkish national basketball team's success, however, came later in the tournament, but, their song sparked a basketball frenzy in the country. It was everywhere. Suddenly, Turks from seven to 70 were chanting the song and started taking an interest in the tournament. 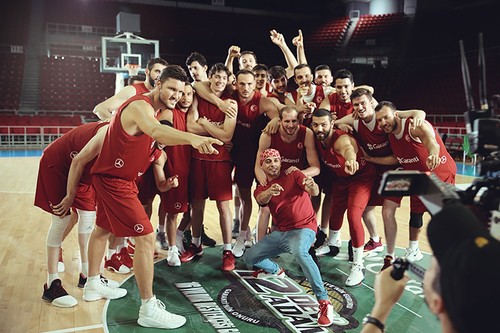 The new generation of 12 Giants are ready to put everything they have to reach to the gold medal in EuroBasket 2017.

It is important, however, to acknowledge that the foundation of the legendary team was laid long before the 2001 tournament or the song. At the time, Efes Pilsen (now Anadolu Efes) and Ülkerspor (merged with Fenerbahçe Sports Club) were the two top basketball teams in Turkey. Their coaches Aydın Örs and Çetin Yılmaz had joined forces to create a national team that would leave its mark on Turkish basketball history.

While people in Turkey were united by the song, the team became a force to reckon with during the friendly tournaments in Italy and Spain just ahead of EuroBasket 2001.

When the matches in Group B (Turkey, Latvia, Slovenia and Spain) began, Turkey was charged. The stands were full; millions of people were fixed to their TV sets to see their national team play and whether they were indeed worth the hype. Hyperbole aside, the first game with Latvia was neck and neck. But with millions chanting the "12 Giant Men" anthem, the tides turned in favor of Turkey.

Now with the entire nation behind them, Turkey's national basketball team managed to beat a high-flying Spain, brushed off Croatia in the quarter finals, and managed to pull off a stunning last-second win over Germany in the semis. Turkey announced its arrival to world basketball as they qualified for the finals in their own backyard.

The 12 giant men battled hard but were ultimately outperformed by Yugoslavia in the finals. And when the referee blew the final whistle, the entire country once again chanted the "12 Giant Men" anthem as a way of thanking the team and saying "Turkey is proud of you."

In the years that followed, the 12 giants may not have lived up to the country's expectations but they have managed to revive Turkish basketball as well as people's interest in the sport.

The giants showed once more what they were made in the 2010 World Championship in Turkey, where they great run before losing out to the U.S. in the finals and had to be content with the title of being the second-best team in the world.

Hidayet Türkoğlu, who later became an NBA star, is now the head of the Turkish Basketball Federation and Kerem Tunçeri is the current assistant coach of the national team.

EuroBasket 2017 is upon us and Turkey will be competing against Great Britain, Russia, Serbia, Latvia and Belgium in Group D. The 12 giant men will face Russia in their first match on Sept. 1.

That 11-year-old girl, who witnessed the birth of the 12 giant men legend, is long gone, but as a 27-year-old young woman, I still hold the same passion, and belief for this new generation of Turkish basketball players.

Share on Facebook Share on Twitter
Previous in Feature Digital services are changing the ways we read and purchase books... Next in Feature Turks always want to be the best at what they do, and the Guinness...
DAILY SABAH RECOMMENDS