Eunuchs of the Orient 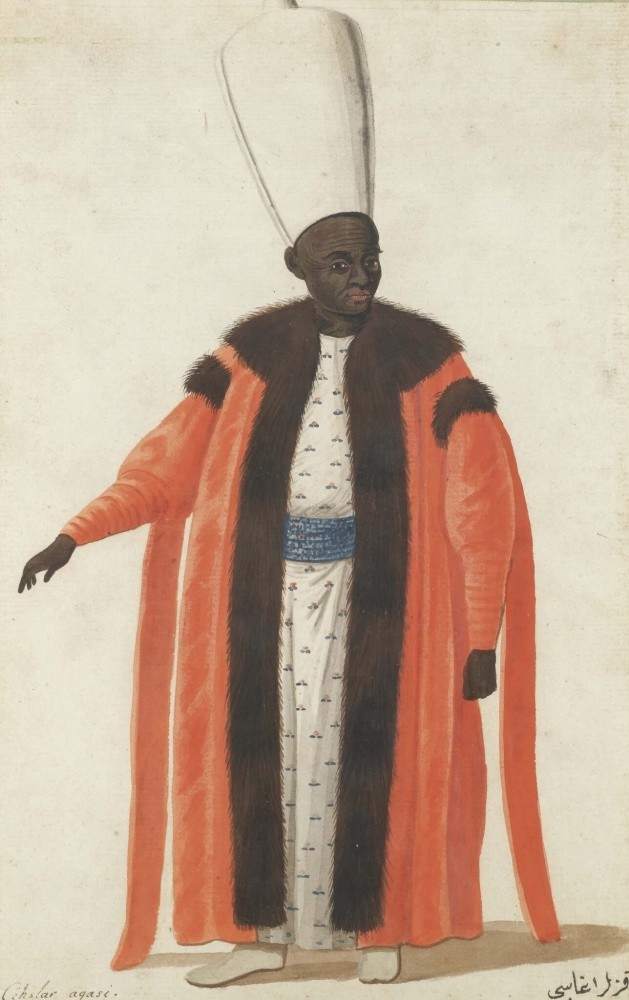 A drawing of a eunuch working at the harem of the Ottoman Imperial Palace.
by Ekrem Buğra Ekinci Sep 15, 2017 12:00 am

Harems and eunuchs are among the most eccentric issues of old oriental life. The discipline of the harem, where it was impossible to come across even a male fly, was handled by the eunuchs. Thanks to them, the palace didn't witness a single scandal in six centuries

The houses of the oriental world had a part called the "harem" where only women lived, and any stranger male was forbidden to enter. There were some servants who were busy with discipline in the harem and its contact with the outer world. These officials, black eunuchs, constituted one of the most eccentric issues in history.

It has to be clarified that eunuch employment is not a practice unique to the Ottomans: It was also seen in Rome, Byzantium, China, Egypt and Iran, along with Abbasid and Seljuk palaces and houses. Ottomans just took over this tradition. Eunuch servants were also employed in some Christian convents and church choirs.

From the fifth century to the beginning of the 20th century, poor and talented children in Europe were castrated to make their voices coarser before puberty. Morechi, the last of these male sopranos called Castrato, died in 1922. Eunuchs were servants who were born without a male organ or emasculated.

African tribes emasculated their enemies and sold them as slaves both as a sign of victory and to drive them to extinction. There were also black slaves who were treated the same way after falling into the hands of merciless people.

However, within the boundaries of Ottoman lands, it was forbidden to emasculate and spay even animals in accordance with Islamic law. As a matter of fact, harsh penalties given to those who emasculated people are clearly seen in a decree of the sultan, which dates back to 1715.

Black eunuchs of the palace lived in a suite adjacent to the harem, the residence of the sultan. It didn't violate religious laws when they entered the harem from time to time. Islam does not approve of Muslim women interacting with men of their family without wearing the hijab. However, children and eunuchs are not covered by this rule. This rule, however, does not apply to jariyahs (female slaves and ladies in waiting). Nevertheless, eunuchs didn't enter the harem; instead, they conducted their mission with instructions they gave outside the door.

If any news had to be carried to the sultan after he retired to the harem, the eunuch was informed about the situation, and he reported the message to the sultan via the jariyah, who was looking out of the sultan's suit that day. Eunuchs were among the few who had the privilege of seeing the sultan whenever they wanted, which was a privilege that was denied to grand viziers and even family members. Hence, they were of high standing.

Harem contact with the outer world was handled by eunuchs as well. If the harem needed a doctor, the doctor was brought by the eunuch. If wood was needed, it was brought by the eunuch. If people of the harem went for a walk, they were accompanied by a eunuch. Thanks to the employment of eunuchs in the Ottoman palace, throughout 600 years, there wasn't a single scandal like those experienced in palaces in Europe.

By preventing unfavorable people from entering the harem, eunuchs also guarded the sultan and his family. During a palace coup, Sultan Mehmed IV was saved by a eunuch named "Süleyman Agha," who took him out of the palace. Sultan Mahmud II escaped from the rebels that busted into the palace in the time of his princedom with the help of two eunuchs named "İsa" and "Amber."

While the Young Turks were looting the palace after dethroning Sultan Abdülhamid II, his eunuch, "Cevher Agha," did not give up the secret location of the palace treasures, costing him his life.

At the head of the eunuchs' organization (darussaade ağası), there was the chief harem eunuch. He was also the controller of the foundations bound to the sultan and his family. Hence, eunuchs came just after the grand vizier and the sheikh al-Islam according to protocol. He stood next to the sultan during all ceremonies.

Granting a black slave such an important, high position is proof of a democratic class understanding in Ottoman times. Also, their employment as eunuchs became a source of income for them, an example of philanthropy that is hard to come across anywhere in the world.

Among the eunuchs, some were intellectual enough to mentor princes. Family members of the sultan were educated by various mentors in a classroom located in the chief harem eunuch's suite. Here, jars of drinking water for the princes were filled and locked away by the chief harem eunuch to prevent them from being poisoned.

A mentor, who acted in the company of the chief harem eunuch, came to class beforehand. Behind a double shade, the palace women sat. At the end of the lecture, first the women left the classroom and then the mentor left. Hence, neither the mentor, nor the women saw each other; they just heard the teacher's voice.

Emasculated servants didn't just serve in the harem; they also served in the Enderun (a special school in the Ottoman palace) where future statesmen were educated. Called "akağalar," these white slaves were responsible for discipline in the Enderun. They were also responsible for opening the third dooryard of Topkapı Palace. They stood next to the sultan during expeditions and peacetime. Some of them, like Hadım Süleyman Pasha and Hadım Sinan Pasha, became famous thanks to their heroism.

Eunuchs were extremely delicate and religious people. Among them, some were gifted in knowledge, poetry and music. They conversed with sultans and entertained them with witty remarks.

One of the eunuchs of Sultan Hamid, Abdulgani Agha, was a real bibliophile. The near 300 books that he donated are present in the Süleymaniye Library, and all of them are in manuscript form. Furthermore, their charities survived until today. The Abbas Agha Mosque in Beşiktaş district, the Mehmed Agha Mosque in Fatih, the Cafer Agha Mosque in Kadıköy and the Beşir Agha Mosque at Babıali are all donations from the eunuchs. Also Agha Mosque in Beyoğlu was constructed by chief harem eunuch Hüseyn Agha.

Beşir Agha, one of the eunuchs of Sultan Mahmud, I, was among the most famous eunuchs. He was also a Naqshbandi Sheikh.

Donations by white eunuchs were also high in number. The Firuz Agha Mosque in Cağaloğlu, the Atik Ali Mosque in Çemberlitaş, the Mesih Pasha Mosque in Karagümrük and the Davud Agha Mosque in Eyüp are among the donations. Also, eunuchs donated several fountains to the city of Istanbul, the capital of the Ottoman Empire.

End of the eunuchs

There were successful cavalries among white and black eunuchs. They conducted contests between themselves by playing "cirit" and "çevgen." Along with the closure of the School of Enderun during the time of Sultan Mahmud, II (1808-1839), white eunuchs became history.

Along with the abolition of the caliphate and the Ottoman dynasty's exile, eunuchs and jariyahs were removed from the palace. Eunuchs were organized enough to establish an aid fund, and so, they were able to help each other throughout those harsh times.

Sultan Abdülhamid II searched for relatives of Nadir Agha, who was enslaved in Kenya when he was a child and became one of the eunuchs of the sultan who stood out for his intelligence, delicacy, character and qualifications. Even with the help of the emperor of Ethiopia, however, he couldn't get any information.

After his removal from the palace, Nadir Agha bought a garden in the Göztepe neighborhood with money he had saved. Breeding Crimean cows, Nadir Agha presented the first bottled milk to the Turkish market and earned money the rest of his life this way.