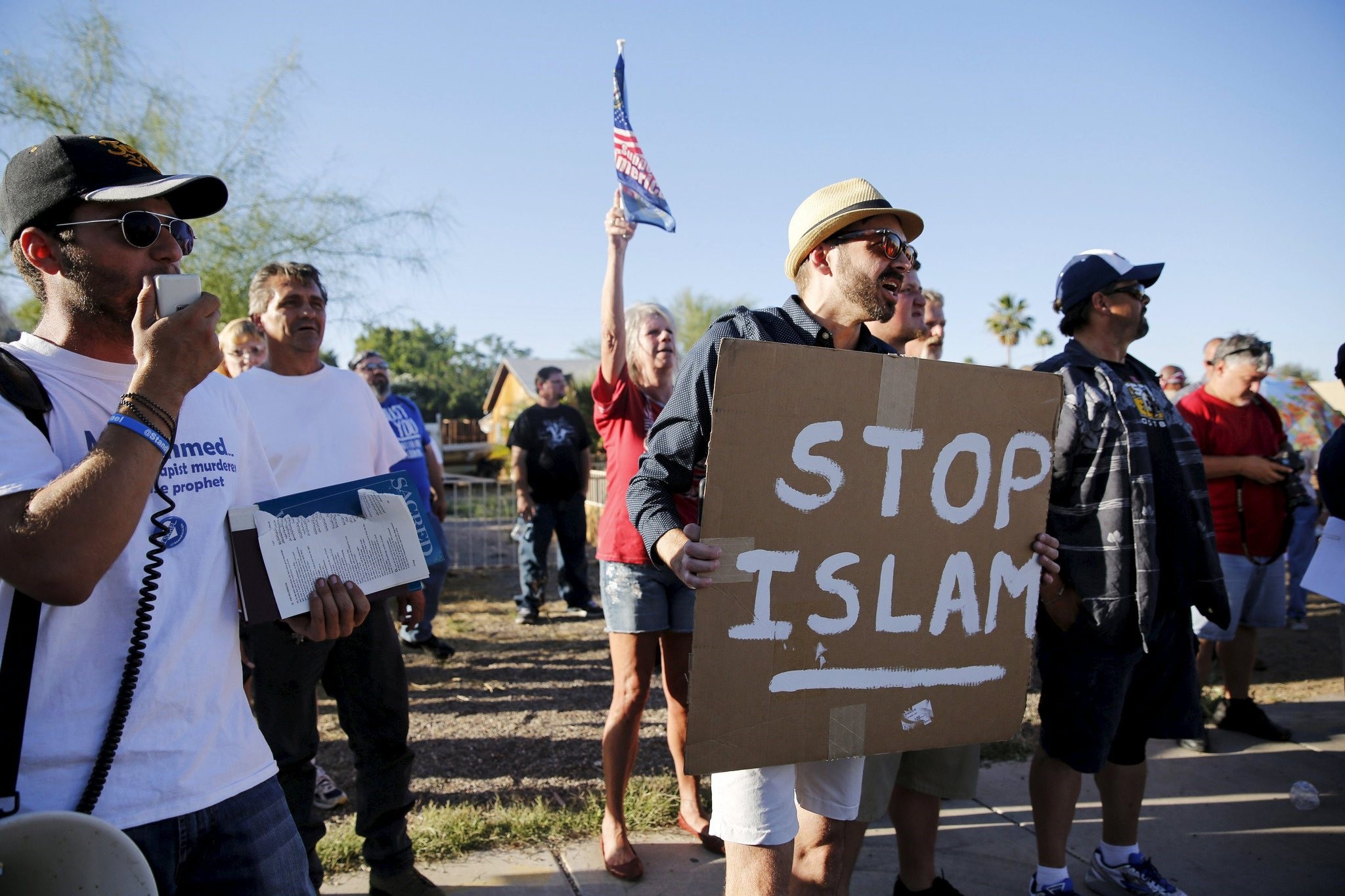 More than 200 protesters, some armed, outside a mosque in Arizona Phoenix, berating Islam and Prophet Muhammad (Peace Be Upon Him).
by Jane Louise Kandur Sep 16, 2017 12:00 am

In the 1930s and 1950s, the greatest threat to the Western world was communism. Today the ‘communist threat' has been replaced by the ‘Islamist threat.' What has changed and, more importantly, why is there a need for a ‘threat' of any kind?

In June, 1950 Senator Joseph McCarthy made a speech. His topic was Communism, and he pulled no punches. Following is an excerpt from that speech:

"We know that the major aim of communism, as stated by its atheistic leaders more than 30 years ago, is to create a Red China, thence a Red Asia, wash it with a Red Pacific-and then enslave America... Communism is no longer a creeping threat to America. It is a racing doom that comes closer to our shore each day... "

In 1960, Richard Nixon, when campaigning to be elected president of the United States (he wasn't, Kennedy was), gave a speech on Communism.

"...we have come to abhor communism so much that we no longer recognize the necessity of understanding it. We see the obvious dangers. We recognize that we must retain our present military and economic advantage over the Communist bloc... we have risen to the challenge and we will keep the lead that we have gained. There is no question that the American people generally will support whatever programs our leaders initiate in these fields.

What we must realize is that this struggle probably will not be decided in the military, economic, or scientific areas....The battle in which we are engaged is primarily one of ideas. The test is one not so much of arms but of faith."

In the 1950s and 1960s, even in the 1970s and '80s, Communism was the enemy, be it Soviet Communism, Chinese Communism, Cuban Communism, or struggling South American Communism. America and the Western world was committed to wiping it out.

A prime example of this was the invasion of the small Caribbean island Grenada in 1983. Grenada had become independent in 1974, but was ruled by a despotic regime, headed by Prime Minister Sir Eric Gairy and his vicious secret police. In 1979 Maurice Bishop was able to seize power. Bishop was backed by the New Jewel Movement. This movement was socialist in nature, but according to one commentator, it was "inspired at least as much by Bob Marley as Karl Marx." In just four years, Grenada achieved a 9 percent growth rate, unemployment dropped and literacy levels increased. In addition to building more schools, free for all, free health care was introduced.

Despite its success, America was by no means enamored of Grenada. The United States wanted to get rid of the New Jewel Movement. The Americans refused to help the new government, and Bishop asked Cuba for help. The Carter administration took greater actions against the small island state, discouraging tourism, placing bans on emergency aid and refusing to recognize the ambassador.

The Carter administration was followed by the Reagan administration. The Americans became even more hostile to the young Grenadian nation. Any economic assistance from the World Bank and other funds were blocked. In June 1983, Prime Minister Bishop visited the United States but Reagan refused to meet with him.

There are a number of reports that the CIA had undertaken efforts to overthrow or destabilize the Grenadian government, using political and economic means. In 1981 an "exercise" to invade and take control of a Caribbean island, much the same size as Grenada, was held. When Bishop was overthrown by a coup d'etat in 1983, America finally had the chance to put its plans into action.

On the morning of Oct. 25, U.S. troops invaded Grenada, removing the government and taking full control of the country within three days.

This small scale operation, seizing a small island with a large number of troops, was heralded as a "great victory," a "roll back" of communist influence. 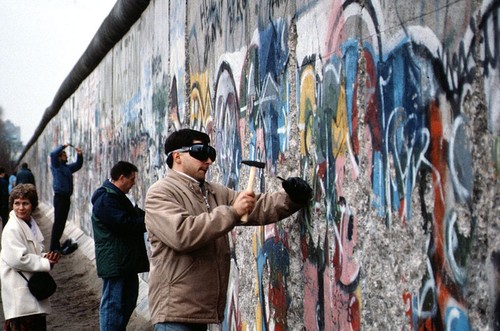 Built in 1961 by East Germany, the Berlin Wall was the symbol of the communist regime in Eastern Europe until its destruction on Nov. 9, 1989. The fall of the wall also marked the end of Cold War between the U.S. and the Soviet Union.

Anticommunist propaganda was useful - it generated support for proxy wars and justified domestic policies, which included illegal wire-tapping and the infiltration of political organizations by the FBI. These were all carried out to "protect the nation against the Communist threat."

But when Communism was no longer a threat, when it was no longer the flag under which to rally people, an enormous vacuum appeared. Now there was a need for a new threat. As we all know, this threat became the "Islamic threat."

However, with a cursory glance at the reality, it is possible to see that the threat today is not Islam. It is neither radical nor fundamentalist Islam. The U.S. and the West support the Saudi regime, one of the most repressive nations in the world; this is a nation which abuses Islam to justify depriving women and minorities of rights, of keeping dissidents under house arrest and severe abuses of human rights. The Saudi regime is just one example of the repressive regimes the West supports to maintain a "status quo" that is to its liking. In truth, the enemy is neither Islam, nor Communism, nor any kind of belief, be it religious or economic.

What the West is set against is nationalism in countries that are in geopolitically significant areas. What are geopolitically significant areas? Well, just about anywhere, but South America and the Middle East come to the fore. Look at Iraq; look at Egypt, look at Syria, look at Turkey. Independent nationalism, that is self-determination by such nations, is abhorrent to the West. How can the West continue to control what is happening in the region if independent nationalism is allowed to flourish?

This was the case in Grenada. This was the case earlier for the communists in Vietnam, for Allende in Chile, for the Sandinistas and even for Saddam in Iraq. True, these regimes had problems, they were far from perfect. But whether a nation was a friend or foe was not determined by military strategy, or questions of democracy and freedom. Any state that refuses to play by the West's rules pose a threat to the Western economy.

In such renegade countries there are efforts to create opposition within the country, or to stir up and support the existing opposition. The country is dragged into conflict, and hopefully chaos. The country becomes compromised and inoperable. And then there has to be intervention. The excuse might be large scale unrest - the West must help local forces to correct the situation. It might be the idea of weapons of mass destruction. Or, as in the case of Morsi, it might be a democratic election in which a person who cannot be controlled by the West is elected into power.

Communism - which most Americans, most Westerners, did not really understand was quickly replaced by Radical Islam, a non-specific, abstract ideology. For many, the attribute radical, carries little meaning. For them, the West is at war with Islam.

By using sweeping, non-specific terms, like "global network," by imbuing this network with an Islamist ideology, the U.S. and the West have made the bitter pill of invading foreign countries easier to swallow. There are many who see little difference in how the Communist threat was used to justify domestic and foreign policies and how they use the Islamic threat of terrorism today.

Although using the threat of Radical Islam to pursue its foreign policy aims, the West does not hesitate to overthrow a secular movement if this movement is displaying a tendency toward independent nationalism.

Western policy in the Middle East, or rather in the Muslim world at large, is not dictated by secularist or religious tendencies. The support for the Saudi Kingdom cannot be explained by the West's devotion to democracy. A more undemocratic regime is hard to find. The attacks and stances, the manipulation and smearing of other countries is not due to questions of "democracy" or "terrorism" or even "human rights." It is down to the fact that such a country is displaying an independent spirit, is trying to determine its own future, its own role in the region. As the country's desire and ability to determine the road down which it wants to travel becomes stronger, the propaganda becomes more virulent.