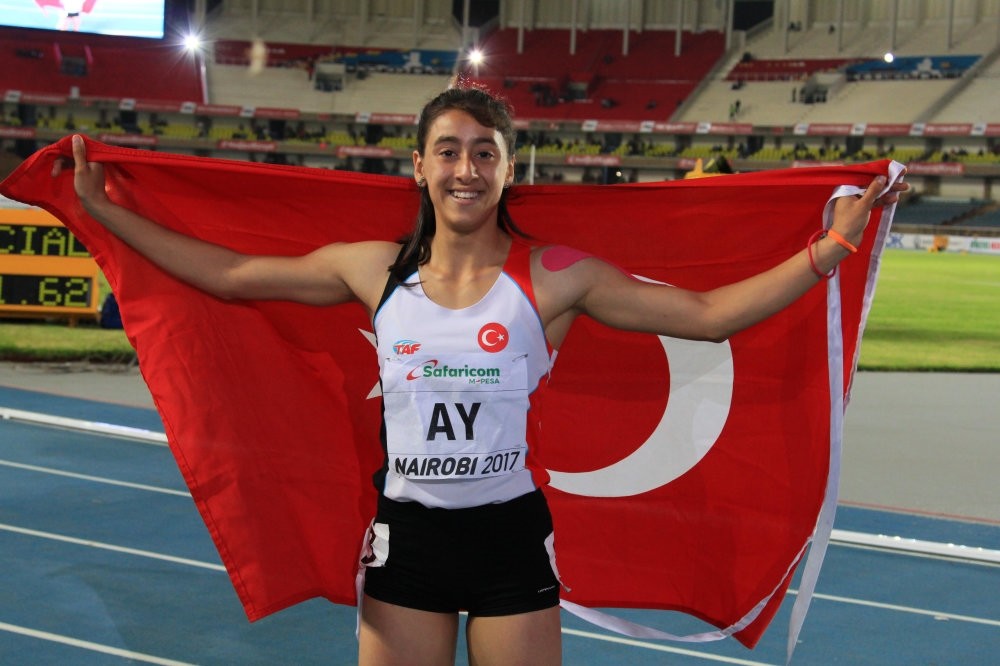 Mizgin Ay, who ran the 100-meter final at the World Star Athletics competition in Kenya last July, became the first Turkish female sprinter to earn a gold medal in the Girlsu2019 100-Meter Finals.
by SERKAN AKKOYUN Sep 19, 2017 12:00 am

For 17-year-old female Turkish athlete Mizgin Ay, breaking records while representing her country is a simple goal that she fulfills with ease. Running the 100-meter final at the World Star Athletics competition in Kenya last July, the young woman became the first Turkish female sprinter to earn a gold medal in the Girls' 100-Meter Finals. For Ay, winning gold was something she expected, having already broken 29 records in previous races. During the award ceremony, Mizgin proudly held the Turkish flag across her shoulders and spoke to spectators, saying innocently in broken English, "I am happy. ...Turkey. ..." Despite her limited English, she spoke the common language of humanity: Love.

Ay's passion for running began when she was just 10 years old. The races she runs, the medals she earns and the records she breaks are all mere details. The young athlete runs for love and because she is in love with the sport itself. Like the famous inventor of Apple, Steve Jobs, who said in his famous commencement speech at Stanford University that we should not ignore the lessons there are to learn from Adam and Eve and Snow White, Ay is doing the job she loves and loves the job that she does. 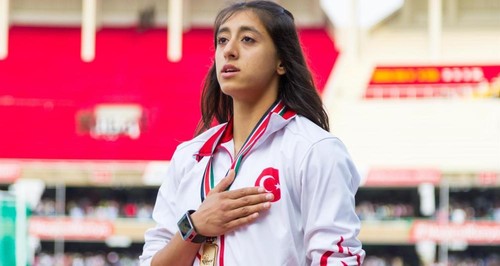 Mizgin broke 21 national records in 2016, coming in first place in every junior race she participated in for Fenerbahçe. At the young age of 17, Mizgin was selected for the Olympic team for the 2020 Tokyo Olympics.

The young athlete is the sixth child of a Kurdish family from Batman province, and her family continues to support her in achieving her goals as an athlete. Mizgin's father, Cemil Ay, wipes away his tears in secret as the family travels from their native city of Batman to Ankara, spending hours on a bus that takes them from the dry heat of the city, nestled between the Sason and Raman Mountains, to Turkey's sprawling capital city. The family earns a living in the city of Batman by doing seasonal works, which are put on hold as they travel to Ankara to support Mizgin in achieving her goals.

Mizgin's father looks out the rear window of the bus as it leaves the family's hometown, wondering how long it will take for him to return to his homeland, where the Batman Stream converges with the Tigris River. Cemil Ay has a love for the caves of Batman, and he reserves a special place in his heart for each of these 4,000 caves.

Upon reaching Ankara, the Ay family, much like the characters of İflahsızın Yusuf, Köse Hasan and Pehlivan Ali, whose stories are told in Orhan Kemal's masterpiece "On Fertile Lands," arrives in the historic town of Beypazarı in Ankara province, which was a major trading post during ancient Ottoman times.

Mizgin's athletic accomplishments are a bit of an expected phenomenon for the Ay family, as her name literally means "good news" in Kurdish. Upon learning of his daughter's athletic achievements in her late teenage years, Cemil said, "Let [Mizgin's] name evoke good news. May she always bring us good news." Mizgin's father also said that the excitement he feels for his daughter's success is insuppressible, asserting that Mizgin had blossomed much like the sunflowers in the fields where she used to run while her parents worked in the carrot fields as a child, growing up to become the pride of her country.

As a child at the age of 10, Mizgin did not want to run, preferring instead to play football with the boys during recess at school. Amid fears of possible injury while playing football with boys, Mizgin's father wouldn't allow her to play football and encouraged her to run. Although the young Mizgin did not want to pursue this sport, everything changed when she met athletic coach Muhsin Soysal.

The two met when Soysal visited her school as a talent scout, looking for talented athletes in schools across Turkey. Conducting a race for the nine and 10-year-old students at Mizgin's school, he was astounded when Mizgin completed a 50-meter race in 8.13 seconds. Soysal read the chronometer with astonishment, unable to believe that this little girl, running in a pair of tennis shoes that were several sizes too big for her, could finish the race in a shorter time than the "fastest" 8.5 seconds of her age group.

Soysal approached Mizgin at the end of the race and asked for her name, to which she replied meekly, "Mizgin," while panting for air. The coach took her by the hand and the two went to her father Cemil, whom Soysal informed that Mizgin had the talent to become a potentially incredible athlete. As you might guess, Cemil shed another tear - this time out of pride - for his daughter.

Mizgin's coach wanted her to begin training immediately. However, rather than training, Mizgin still preferred to play football in the schoolyard or work in the carrot fields to help her family. Despite her lack of interest in a potential career in sports, Soysal refused to give up easily, bothered by the possibility that this young girl's talent might go to waste. So, Soysal asked Mizgin's father Cemil to exert his influence over her, and after two years of struggling with Mizgin, he finally emerged victorious and the young Mizgin established her athletic career and quickly began breaking records wherever she went. After a string of successes and in an unbelievable twist of fate, the financial problems Mizgin's family had faced all came to an end when Fenerbahçe stepped in. Upon turning 16 years old, Mizgin joined Fenerbahçe, one of the leading athletic branches in Turkey, and it was high time for her to raise her sights and pursue bigger dreams.

When she was just 16 years old, Mizgin competed with rivals who were much older than she was and, with her extraordinary talent, she broke 21 national records in 2016, coming in first place in every junior race she participated in for Fenerbahçe. At the young age of just 17, Mizgin was selected for the Olympic team for the 2020 Tokyo Olympics. Recently, she won gold at the World U18 Championships in Kenya, writing her name in Turkish sports' history.

Mizgin, who has graduated from Beypazarı Anatolian High School with high honors and a certificate of excellence, dedicated her world championship medal in Kenya to the martyrs in Turkey. As her father Cemil watched her run the 100-meter final in Kenya, he thought about the "good news" of her birth 17 years ago and the contributions she has made to the world of Turkish sports since then, and tears fell from his eyes.