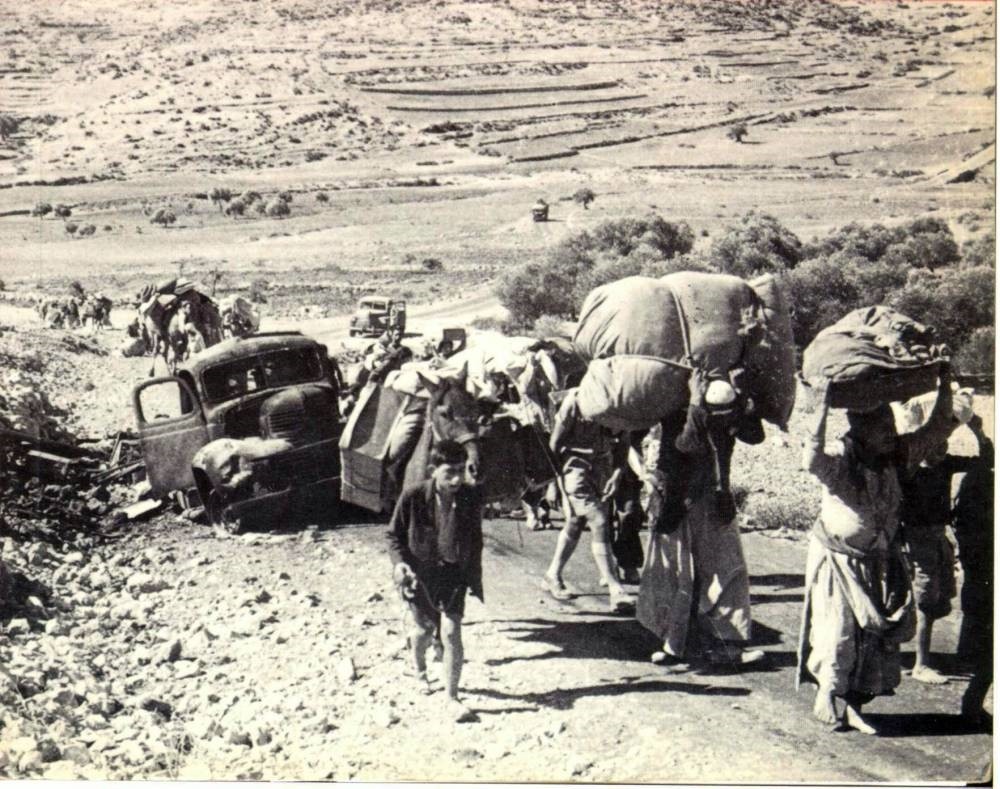 People who were suddenly forced to leave their homes try to find a safe place for themselves after the Israeli occupation in the late 1940s.
by Mustafa Fatih Yavuz Sep 21, 2017 12:00 am

Despite general opinion on Tel Aviv, Jaffa and Haifa, which are known as the peaceful parts of Israel, the shadow of ethnic cleansing and Zionist ideology lingers on these cities and stays frozen in the memory of the Arabs

Israeli cities such as Tel Aviv, Jaffa and Haifa are known among Israelis as relatively peaceful cities compared to the West Bank and Jerusalem, both of which are still under Israeli occupation. Despite the calm atmosphere in some parts of Israel, the echoes of forced displacement and ethnic cleansing of the Palestinian people that has persisted under Zionist aims to create a "Jewish-only" state since the 1940s are still heard across Israel. Labelled by the Zionists as so-called "liberated zones" amid attempts to construct a new Israeli legacy and identity devoid of Arab roots, areas like the West Bank and Jerusalem continue to be under Israeli occupation as the Palestinians are separated demographically and geographically from the Israelis.

Zionist policy also separates indirectly the memories of the 1948 occupation from the 2017 occupation. Even though cities like Jerusalem and al-Khalil are the first cities that come to mind when discussing the Israeli occupation today, it is also important to recall other areas of Israel that were brought under Israeli control in 1948. The occupation has had continuous effects on the Palestinian people, who are labelled as refugees, after they were denied their lands and forced to flee Zionist terror attacks. All of this now haunts the legacies of these cities.

During the period of the U.N. Partition Plan on the establishment of the Israeli state, the port of Jaffa, one of the oldest in the region, was targeted by Zionist terrorists, forcing the town's 120,000 Palestinians to leave as the Zionists seized their property and labeled the area a "Jewish" neighborhood.

In the 1950s, Jaffa became subject to the systematic Zionist policies of the Tel Aviv Municipality, known today as Tel Aviv-Yafo, essentially erasing the memory of Palestine completely and replacing it with Jewish heritage. The Arabic names of architecture, neighborhoods and villages were removed or destroyed, and the internally displaced Palestinian residents of Jaffa were barred from returning to their lands. This systematic annihilation of the Palestinians applied to every corner of Jaffa and included the obliteration of several stunning Palestinian structures and villages.

Namely, the Al-Shaykh Muwannis village in Jaffa was unable to survive the Israeli occupation, and its residents fell into the hands of the Zionists, their existence essentially fading away entirely.

Located in an area that is known today as Ramat Aviv, the Al-Shaykh Muwannis village is now a neighborhood of Tel Aviv, formerly named after a local religious leader or sheik whose followers settled in the village. The first records of the village date back to 1799, during the French invasion of Palestine, according to a map made by French engineer, Jacotin.

Later on, during the Egyptian era, İbrahim Pasha, the son of Egypt's ruler Mehmet Ali Pasha, sent his workers to cultivate the lands of the al-Shaykh Muwannis village. Years later in 1917 during World War I, the village's strategic location near the al-Awja River (Yarkon River) made it a source of conflict, and the Ottoman army occupied the village to defend the north side of the al-Awja River from the attacks of the British forces. However, the Ottoman Empire's defensive was unsuccessful, and expeditionary forces, led by General Allenby, seized the village and advanced against the Ottomans.

After Palestine fell into the hands of British forces, the Jewish population in Jaffa's surrounding areas changed the fate of the village itself. During the periods between mandates, the village's lands became subject to land acquirement under the establishment of the state of Israel.

According to data compiled by the society of Canadian Jews established for Palestinian land acquirements since 1912, Palestine Remembered, 6,000 of the total 16,000 dunams of the village were presented as the representatives of the society. However, despite the large number of dunams acquired by two Jewish companies Hachsharat Hayeshuv and Geola, the acquirement was not implemented. Later, in the 1920s, Jewish aims of acquiring land gained new momentum. The American Zion Community acquired 8,000 dunams in the area of Jlil, located in the northern part of the Al-Shaykh Muwannis village. Then, 20 years later, the community witnessed land negotiations between Sheik Badas and Hachsharat Hayeshuv town representative, Hankin. 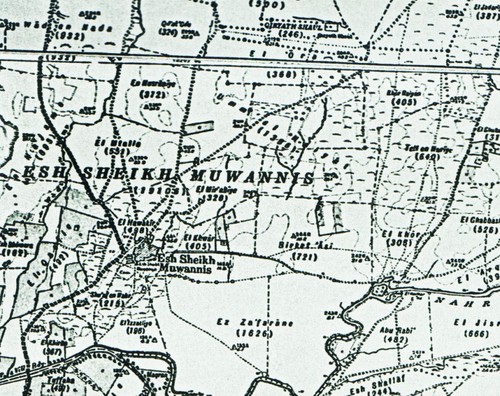 An old map pinpointing the location of Al-Shaykh Muwannis in today's Tel-Aviv.

The story of the occupation and evacuation of the Al-Shaykh Muwannis village is clouded by the terrorist implications of Zionist forces such as kidnapping of locals, spreading fear and leaving the residents of the village to starve - typical methods used in other Palestinian villages, as well. Furthermore, whatever happened in the village merely reflects only a part of the Israeli occupation plan to seize all Palestinian lands via some very coercive methods.

According to data from the website, www.palestineremembered.com the story of the village was the subject of a lecture given during the Tel Aviv University Panel in 2003. The panel provided crucial insight into the evacuation and occupation plan of Zionist forces.

On the other hand, the U.N. Partition Plan left those Palestinians living in Jaffa bursting with anger. At the time of the plan's implementation, the port city of Jaffa was an economic and political base for the villages surrounding it. For this reason, the villages were highly dependent on Jaffa in terms of the marketing and exporting of goods produced in the town. Cutting off the road between Jaffa and its surrounding villages would break the backs of villagers economically, and in terms of living conditions.

So, the Zionist forces did this, occupying the strategic El Alameen Bridge to cut southern and northern Palestine apart, also severing the connection between Jaffa and surrounding villages.

Even though Zionists cut off road access, the village survived under good economic conditions for a while, and the village even became a center of attraction among local residents for a short while, providing brief relief for villagers under Zionist siege. However, favorable conditions didn't last long, and people started to ration their food due to the lack of crucial supplies and for being unable to work in agriculture.

In attempts to break the siege on the village, leading figures of the village, such as Ibrahim Abu Kheel, Jamal Eljisr and Tewfik Abu Keshick, met with Abraham Shapeera of the Zionist forces to release Arabs from the siege that they suffered. However, that negotiation was made in vain. Later on, leading figures presented their worries to the King of Jordan, Abdullah. However, the king's reply was far from one of satisfaction, basically saying: "Remain and hold tight as far as we subdue Tel Aviv."

During that period, the fear being spread by Zionist forces affected Palestinian villages badly. People began to be informed of Palestinian killings from other villages, told of how Zionist forces were emptying areas to be filled with Jewish settlers. So, the residents of the village started worrying that they would be next and, as a result, a number of young residents of the village took up arms to defend themselves, collecting whatever means of defense they could, digging tunnels to the mosque and the house of Mahmoud Baydas which was eventually destroyed in 2003.

Following these measures, exchange of fire between Zionist forces and Palestinian villagers began and lasted only one day. One of the young defenders of the village, Adnan Elsayeh, was 12 years old when he took up arms to defend his village, saying, "We volunteered to protect our village but we only had a few guns and during the exchange of fire, our munitions were depleted rather quickly."

The turning point in village evacuation attempts came with the kidnappings of village residents by Zionist occupants who were spreading fear among villagers. Due to the siege, gaining access to important supplies for survival was excruciatingly difficult for the villagers.

For this reason, a group of respectable men named Mustafa Al Zayat, Saleh Aldahnous, his son Ali and Lutfe Elsayeh went to Jaleel to get basic supplies such as fuel and food. However, on their way back to home, two Zionists named Irgun and Lehi kidnapped them. Even though two of them were released in three days and the rest in two weeks, rumors were rampant among villagers that they could be executed.

Amid fears of the tightening siege, families started to consider leaving the village. According to insight given by Hanna Yusuf Ibrahim Abu Eid, whose family was from the Al-Shaykh Muwannis village, all efforts of Abu Kheel Ibrahim and others to convince people not to leave were unsuccessful. Rich families such as the Baydas and Dahnous families were the first to leave the area to escape death. They knew that sooner or later, the Zionists would use terrorism as a method for occupying the village.

One of the women who fled the village said that they left area in a hurry and left everything there, adding, "I even left a pot of food cooking on the fire."

Those poor souls that were forced to leave their villages became internally displaced people and refugees, some of them living in tents and moving to other countries such as Jordan, Syria, Iraq, Canada, the U.S. and Australia. Many families were split apart and not reunited for many years.

Although the landscape of the village has faded away and different plans have been imposed on the village, the area started to lose its Palestinian character and was replaced with the town of Ramat Aviv, established in the 1950s and resulting in the development of the Tel Aviv University's Ramat Aviv Campus which covers the majority of the village area and was established in 1963.

However, Tel Aviv University made a controversial decision in 1991 to expand its campus over the village's remaining area, which included the Green House. Rather than demolishing the building, they reconstructed it according to the architectural plans of Italian architect Camillo Manfredi, who was selected during an architecture competition conducted by the university. However, that reconstruction unfortunately ruined the original form of the house, turning it into some Oriental-type house. The building was predominantly used as a faculty club of the university that have mentioned the house in its official documents by referring its historical background and how the building survived from Ottoman times to British mandate and Israel era.

Still, the university never mentioned what happened to the residents of the village. For a long time, the building has been used as faculty lounge and club under the name of Marcel Gordon. After a few renovation projects the building is now used for private organizations under a new name, Camillo.

*Researcher at TRT World Research Centre, B.A. from the Department of International Relations at Beykent University. He is currently doing a master's degree in conflict resolution and mediation at Tel Aviv University