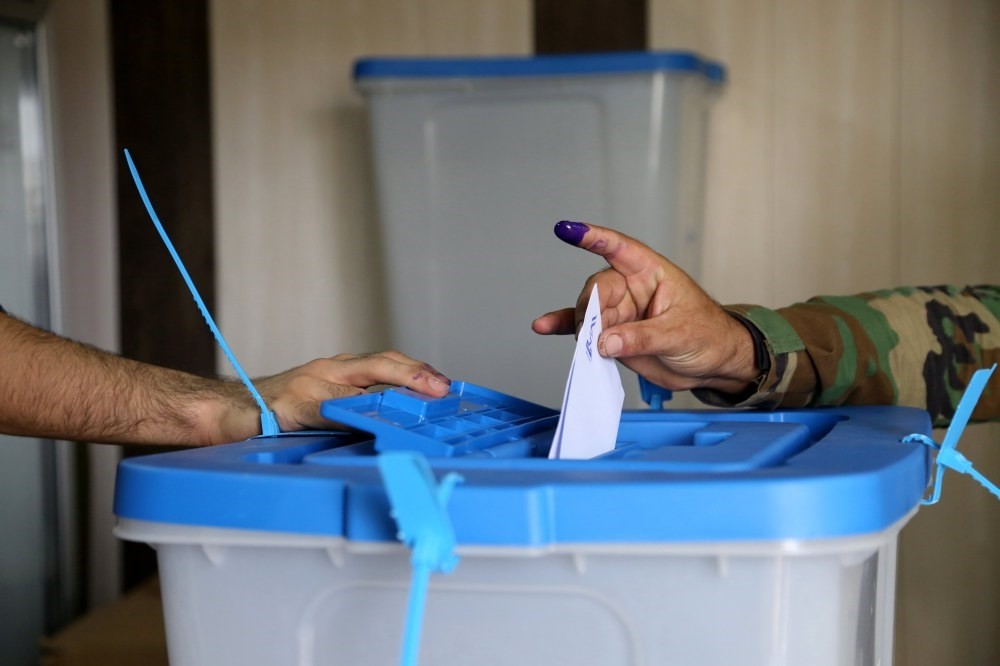 A Kurdish peshmerga soldier votes during the Iraqi Kurdistan independence referendum in Irbil on Sept. 25.
by Fatima Abushanab Oct 03, 2017 12:00 am

By proceeding with the referendum, the Kurdistan Regional Government both ignored the opinions of the Iraqi government and Turkey as well as non-Kurdish population of the region

After last Monday's independence referendum in northern Iraq there has been a swath of opposition to the Kurdistan Regional Government (KRG) for its blind rebellion aimed to sideline the Iraqi regime and Turkey for disregarding their opinion on the matter. This is not only an issue about the territorial integrity of Iraq and the security of the Iraqi people - whom by the way, are not just comprised of Kurds - and its regional neighbors, it is also about the stability of the greater region.

The operation led at the Habur border gate is indicative of a warning on Turkey's part that this operation could be taken a step further. Regardless of KRG Prime Minister Nechirvan Barzani's claim that borders will not be affected, it would be too optimistic to assume that such comments will assuage the critical situation between Turkey and the KRG. Sovereign borders will be protected, in this case, without causing any injury to either the Turkish or Iraqi nations.

The kind of dialogue and relationship between the KRG and the Iraqi Prim Minister Haider al-Abadi does not reflect in the communication with the Turkish state as of yet. President Recep Tayyip Erdoğan last week stated that the leadership of KRG did not consult Turkey on the referendum. The body's action regarding the referendum, Erdoğan declared, is a staggered walk towards ethnic and sectarian conflict in the region.

We are assured that the Turkish government will neither make any concessions nor allow any room for appeasement. Otherwise the KRG, Iraqi government and Turkey in addition to other powers who have a stake in the region will be embarking on a long and winding road to war. The struggle to "redesign" the Middle East will not only become a reality that is fully in force. This chaos will be further realized with regional powers' efforts to try to supposedly stabilize a region that is already set ablaze. And, of course, this will not be done with good intentions.

War generates money, and the control of oil taps will render incentives to be successful only to a certain degree. After dialogue comes to a breaking point, it will be difficult to discern between countries' efforts to put the fire out or stoke it in the effort to exacerbate the ever-growing instability in the Middle East.

Taking a look at the matter from Ankara's point of view, the best option the KRG has right now against Turkey is to retract. Given the current circumstances, the liberalist approach to peace and cooperation through diplomatic and constructive dialogue became a less desirable option from the beginning because of the KRG's reckless and disruptive behavior.

This is not an issue of political freedom but it is about the encroachment of further terror and instability directed at Turkey, Iraq, Iran and the greater region. With the yes vote the KRG decided to openly jeopardize other states' interests. And those who choose to side with the KRG will only be faced with failure, because regional groups and regimes will not allow the referendum to evolve into the establishment of a state.

The KRG does not have the support of anyone but Israel right now. Even the United States, which is known for its unconditional support of Israel on international affairs, is against the KRG's referendum. The United Nations, which attracts ample criticism for its slow motion stance in the face of calamity affecting peoples across the globe, was hasty in discouraging the KRG on its referendum path.

In this context, international cooperation in support for the KRG does not exist. The local and regional pressures will attempt to and successfully prevent sectarianism being worsened. Iraq, Iran, Turkey and Russia as some of the major actors in the region have come together on a mutual platform of a common strategy and agreement. From an overall perspective we can clearly see this is about "territorial integrity" trumping the politics of identity.

In the larger scheme of regional and international relations it will be in the best interest of the KRG to think and act smart by backing down. This is due to the fact that there is almost zero institutions that are supporting the KRG and neighboring countries are on guard to take the necessary pre-emptive measures. If the KRG continues to do so otherwise then dire consequences await it in the near future. The KRG must know that.