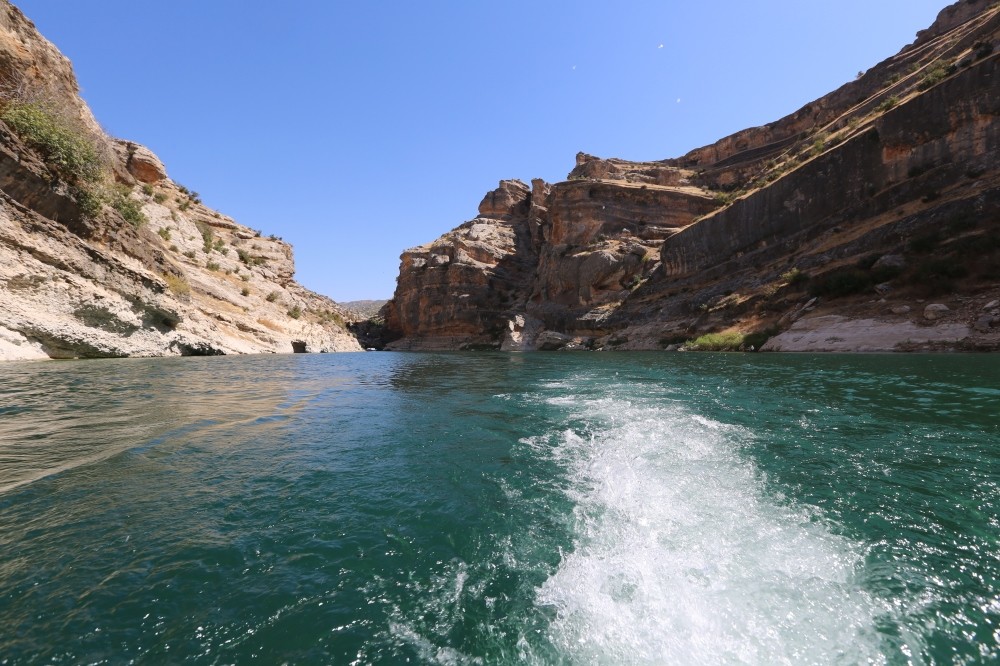 A favorite of photographers, the 20-kilometer valley captivates visitors with its untouched natural beauty and has remained undiscovered by many as a hidden gem of u015eanlu0131urfa.
by Anadolu Agency Oct 14, 2017 12:00 am

Imagine a place undiscovered by modern man, hosting only a handful of nature enthusiasts and pathfinders. Welcome to Takoran Valley, a dreamy place where you can let your inner Indiana Jones run free

Described as a "hidden paradise" by the locals in the Şanlıurfa province, Takoran Valley awaits nature lovers with its mesmerizing beauty.

Formed by the Euphrates River and situated in the river basin, Takoran Valley begins in Mezra, 40 kilometers (25 miles) from Şanlıurfa's Siverek district and stretches all the way up to the Adıyaman's Gerger district.

A favorite of photographers, the 20-kilometer valley captivates visitors with its untouched natural beauty and has remained undiscovered by many as a hidden gem of Şanlıurfa. The valley is home to a canyon, waterfalls, a windmill, rock tombs, historic monuments, unique scenery and rich flora.

Amid aims to promote tourism in Takoran Valley, the Siverek and Şanlıurfa municipalities are conducting joint projects. In addition, the Siverek District Governorate has purchased tour boats with plans to provide tour services to visitors. A concrete road has also been constructed to ease transportation to and from the area. The municipalities plan to establish relaxation areas in addition to the picnic areas amid hopes that Takoran Valley will contribute to the tourism in the region.

He indicated that they have prepared various projects in the scope of the plans to open the Euphrates River basin to tourism, saying that they are committed to meeting the goal of introducing the natural beauties of the valley to the world. 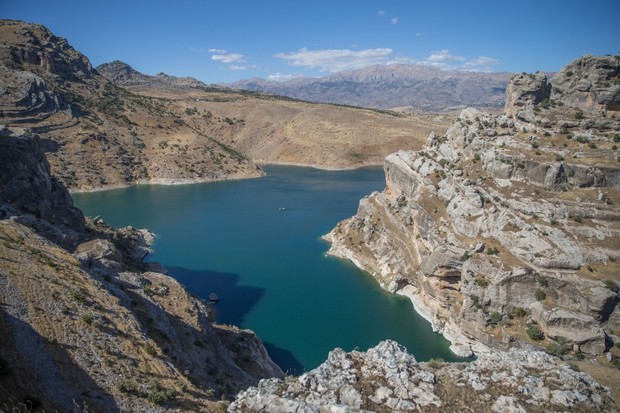 Expressing his hope that the valley will be a locomotive for the region's tourism when the project is complete, Yılmaz described the geographical area of the valley, saying: "This valley stretches from the Nissibi Bridge to the boundaries of the district of Gerger in Adıyaman in the north. In fact, this is an untouched area waiting to be explored. We want to promote the area to our city, our country and the entire world. We have implemented the initial steps of the project and hope that it will be completed by next summer. The project will include a beautiful social facility, a picnic area and artificial pools. This facility is really important for us, and all of our efforts are focused on offering the relaxation area and tour boats to service families who are expected to come from Siverek, Şanlıurfa and Adıyaman. Although Halfeti is a prominent contribution to tourism in the area, there is nothing like the bays and canyons of Takoran. We were informed that there are many underwater caves and submerged churches in the valley. We hope that we will be able to offer these historical aspects of the region to the entire world when the project is complete."

Noting that first-time visitors who come to the area are really surprised by its magnificence, he said: "It is our mission to offer these beauties to the service of the people."

Yılmaz stated that they also plan to organize various events in the Takoran area, adding: "We will organize events that reflect the traditions of Takoran. We hope that people will enjoy swimming here in a safe environment, having picnics with their families and relaxing with the capable facility."

Local official Sıtkı Köprüdüz, who works to host visitors by his own means, said even though the region is not well-promoted, it still attracts local and foreign visitors.

Reiterating that the valley was completely submerged in water after the construction of Atatürk Dam, Köprüdüz said: "There are so many beautiful features in Takoran Valley, including waterfalls and historic windmills. It is also home to the village of the famous actor, Yılmaz Güney. However, we face difficulties as the area does not offer any social facilities, yet. We try to host visitors by personal means and are hopeful regarding the ongoing projects being conducted by the municipalities. When they are complete, I think that many people will come and visit the area to witness its beauty for themselves."

The head of the Chamber of Local Tourist Guides, Müslüm Çoban, said in the aftermath of the exploration of the valley, which he called a "hidden paradise," tourism in the area will see a boost.

Çoban mentioned that they bring tourists to the valley from time to time, stressing that the area needs more functional facilities.

"Facilities, including restaurants, spacious and safe boats and social facilities, to be established here will allow the valley to become another Halfeti for Şanlıurfa province. In particular, touristic groups coming from Diyarbakır will have the chance to visit Takoran and taste the traditional foods, fish, Takoran pomegranates and their syrup. They will also have access to tour boats which will take them to Adıyaman to visit Mount Nemrut. Takoran Village is an attraction spot for photographers as well," said Çoban.