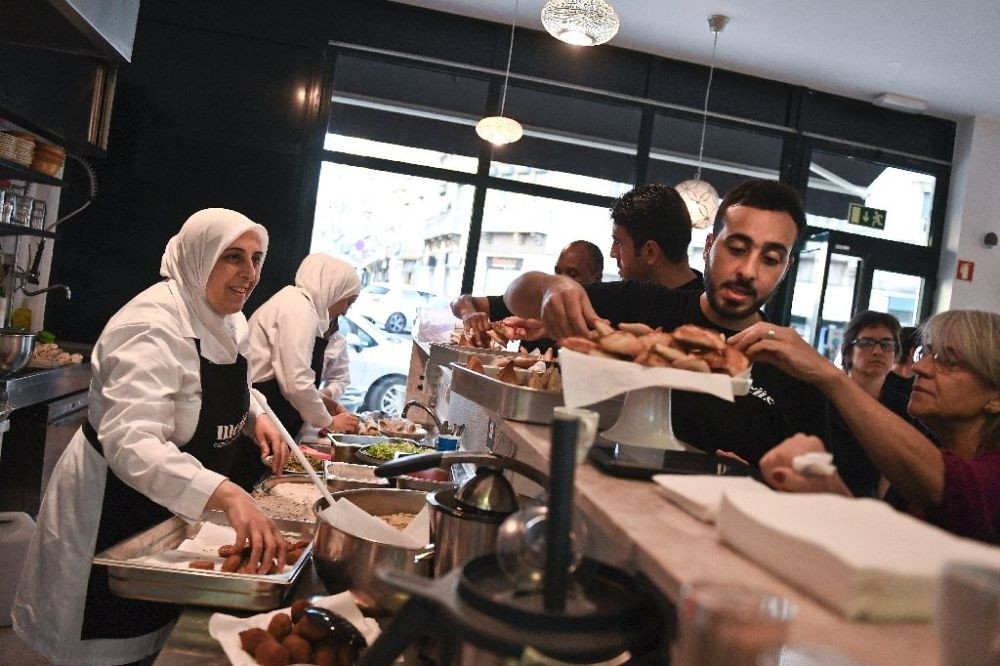 Mezze serves up traditional Syrian dishes,such as yalanji, fattoush salad, kibbeh and baklava, by experienced cooks.
by Oct 17, 2017 12:00 am

Mezze restaurant is run by Syrian refugees after money was raised to renovate a former butcher's shop in a market in the Portuguese capital's popular Arroios neighborhood.

Leonor Rodrigues was one of the customers immediately won over by Mezze when opened in September.

"The chicken kebabs and hummus, everything was exquisite. Next week, I will be back. That is for sure," the translator said. "The place is really good, and it is great to integrate the refugees this way."

The restaurant is the result of a fundraising drive, which raised 23,000 euros ($27,000), initiated by former journalist Francisca Gorjao Henriques, who founded the "Pao a Pao" ("Bread to Bread") association in 2016 to help refugees. 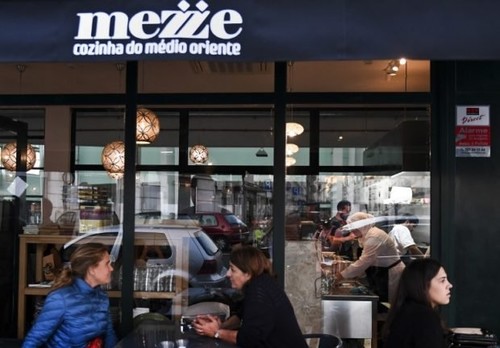 "As soon as I announced the restaurant project and said it was intended for Syrian families, people immediately joined the campaign to collect money to renovate and equip the building," 45-year-old Henriques said.

Inside, it is impossible to ignore the delicious aromas coming from the kitchen where a dozen Syrians work. Some of their stories are even featured on the menus.

One member of the staff, Rafat, admitted that Lisbon was not his dream destination when he fled Syria nearly three years ago, living first in Egypt before moving to Portugal last year.

The 21-year-old now lives in Lisbon's northern suburbs with his mother, Fatima, and two sisters, Rana and Reem, who also work at Mezze. Rafat's father, who ran a traditional restaurant in Damascus, died in the civil war that has killed more than 330,000 people since 2011. 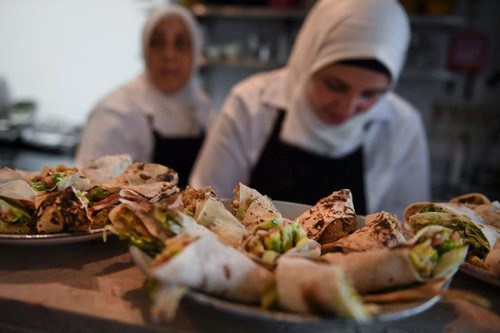 "All I knew about Portugal was the footballers, Cristiano Ronaldo and Nani. I thought it was a rather poor country. My first choice was Germany," Rafat, who did not want to give his last name, told Agence France-Presse (AFP).

However, he said he is "very happy" to have finished his journey in Portugal, where he hopes to be joined by his older brother who lives in Turkey with his wife and their small boy.

"We feel good here. The Portuguese are very tolerant, and we have never had a problem. My sisters can go to the beach wearing a hijab without feeling judged," Rafat said in hesitant but already very good Portuguese.

Many European countries have been resistant to taking in more refugees in the wake of the migrant crisis that hit the continent in 2015, but Portugal has gone in the opposition direction.

The European Commission asked Portugal to take in 5,000 migrants - the majority from Syria, Iraq and Afghanistan - under a plan to relocate 160,000 asylum seekers from overstretched Greece and Italy to most of the other 28 EU member states.

While the quotas have proved unpopular with some former communist eastern European governments, the Portuguese government offered to double its quota to 10,000 in February last year.

But the country has only received 1,400, so far and of those, more than half have already left Portugal, according to the latest official estimates.

Portuguese authorities say the refugees left due to the appeal of countries with better economic prospects, such as Germany or Britain.

Of those who stayed in Portugal, only one-third have entered the job market, the government said, acknowledging too many remain unemployed.

Rafat says Pao a Pao, which helps refugees find jobs and integrate, has helped his mother and sister feel at home.

"For my part, I was already working in a kebab restaurant. But for the women, who often stay at home, it was more difficult," he said.

But he said he could not understand why other Syrian refugees left Portugal.

"I have Syrian friends who left without understanding that language is the key to a country. They did not try to learn it, and that's why they could not integrate," he said.

Mezze serves up traditional Syrian dishes,such as yalanji, fattoush salad, kibbeh and baklava that the staff has been cooking for a long time, but they still had to learn how to work under the conditions required for restaurants in Portugal.

The country's welcoming spirit again came to the rescue with a hospitality school in Lisbon offering to train them and, at the same time, give the refugees the opportunity to learn some of the secrets of European gastronomy.