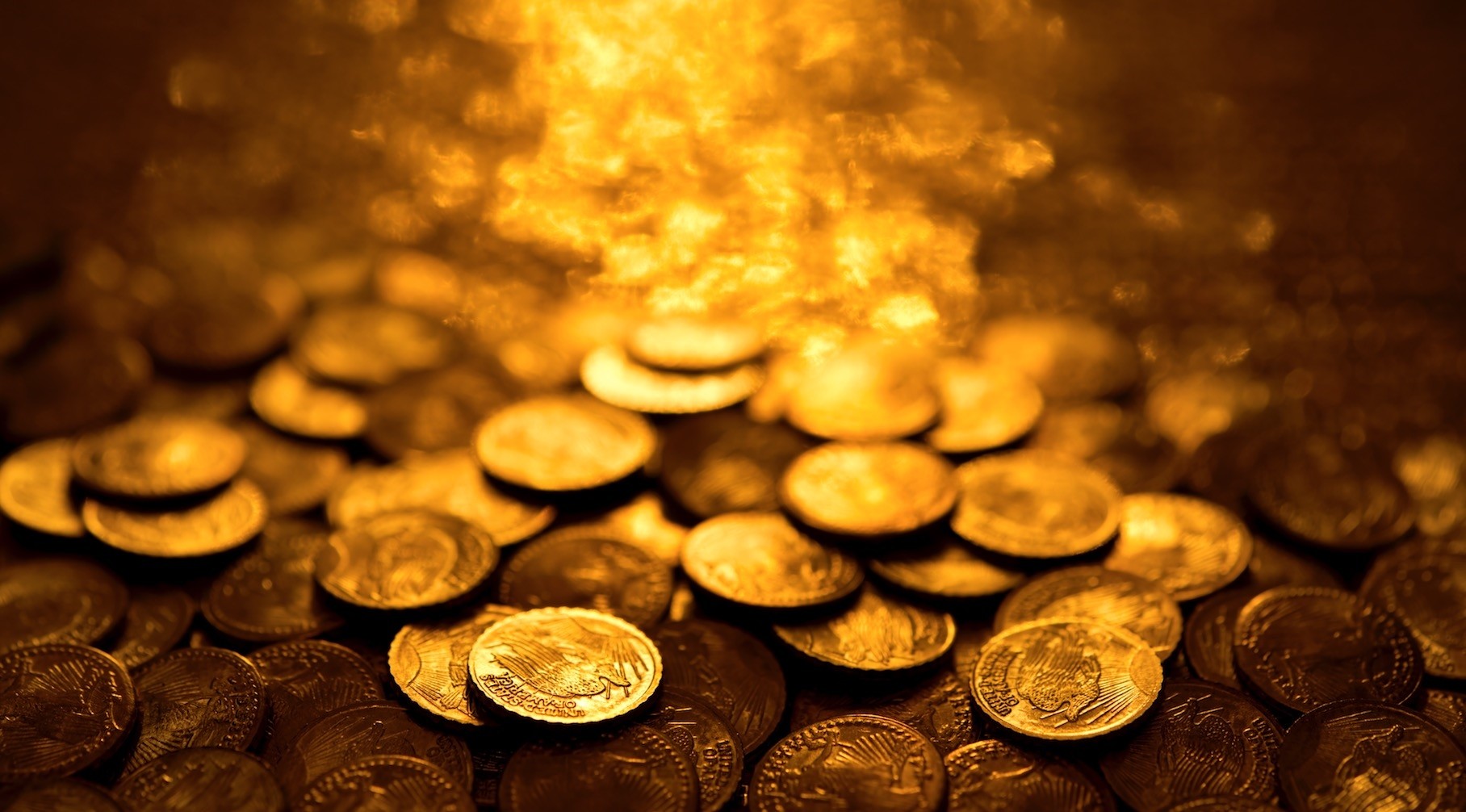 Gold,a desired metal, has been a measure of wealth since time immemorial, but why is gold still so important today, and more importantly, how did it get into our world?

The use of gold by mankind predates iron and copper. Traces of gold have been found in caves that date back to the Paleolithic age, that is, 40,000 BC. Gold has always attracted the human eye, and as it is prevalent throughout the world, it has always been popular in every culture. As gold does not corrode or tarnish, it symbolized immortality and was equated with power.

The ancient Egyptians used gold for decoration and to demonstrate power. The code of Menes, the founder of the first Egyptian dynasty, states that "one part of gold is equal to two and one half parts of silver..." This is the first attempt at creating a gold standard.

By 1,500 B.C., the Egyptians had established a method to determine the purity of gold. The gold would be heated in a bone-ash crucible, which absorbed base metals, leaving only silver and gold when the heating process was finished. Then the silver would be removed, and what remained was pure gold.

For centuries alchemists devoted themselves to trying to make gold. Alchemy is the transformation of base metals into gold. Although such efforts failed to produce gold, the activities of the alchemists created the foundations of modern chemistry.

However, as popular as gold was, it was not used as anything but decoration for centuries. Gold was first used for coinage in the eighth century B.C., in the Kingdom of Lydia, located in western Turkey.

With the introduction of gold coins, gold started to have a value as a commodity. This was the first time "money" was used; gold coins started to be used in bartering, making trade much easier. Due to the large hoard of gold that the Kingdom of Lydia was able to amass when trading, the last king of Lydia, Croesus of Mermnadae (570-546 B.C.) is the man referred to when someone is described as being as "rich as Croesus."

But what the Lydians did was more than make their kings rich. By introducing the concept of money, economies started to grow. The Greeks and Romans traded in gold coins for spices in India and silk in China. During the height of the Roman Empire gold and silver coins from Rome could be found from Britain to North Africa.

And everyone knows about the great gold rushes of the 18th and 19th centuries. We are all familiar with about the "gold fever" that struck the United States, leading to a number of gold rushes. The first significant gold rush was in 1799 in North Carolina, but the one that most people are familiar with is the California gold rush of 1848. The population of San Francisco before 1848 was about 1,000 people. Two years after gold was discovered, there were 25,000 people living in the city. People came from all over the world to get in on the riches.

The next great gold rush was in the Klondike in 1896. The winters in the Yukon Territory were harsh, but people from all over the world fought the elements to get at that gold.

From the middle of the 19th century on, Australia also saw a number of major gold rushes. Gold was discovered in New South Wales and Victoria in the 1850s and in Western Australia in the 1890s. These gold rushes did a great deal to bring people to the outback, and many of the towns in these regions exist solely due to these gold rushes.

It was not until much later - the 18th century in fact - that the first national gold standard was adopted. In 1792 the United States Congress passed the Mint and Coinage Act. The act set out a fixed price for gold in terms of U.S. dollars. That is the currency was now tied to gold. The mint of the U.S. had to buy and sell gold and silver at a rate of 15 parts of silver to one part of gold. However, after the Civil War, the U.S. found itself in so much debt that it would not be possible to pay it off in gold or silver. Paper money was declared to be the new legal tender. The paper dollar was issued to represent the reserve of gold that the U.S. held.

After two world wars, the gold standard was destroyed. The Bretton Woods Agreements in 1944 created a gold exchange standard where the price of gold was fixed to the U.S. dollar. This made the U.S. very powerful in international markets, a position it still enjoys today. The reason the U.S. dollar was chosen was because after World War II the U.S. was clearly the strongest economy. Europe had been torn apart by years of war, and the U.S. had come out of the war with no damage to its infrastructure and no need for extensive reconstruction, unlike Britain or France.

The U.S. dollar was chosen for the Bretton Woods system because the United States was easily the world's strongest economy coming out of World War II. Unlike previously strong European nations, the United States did not have to repair infrastructure or fix towns that had been bombarded during the war. In fact, gold being tied to the U.S. dollar is probably one of the most significant factors in the U.S. becoming a global superpower.

The Bretton Woods system came to an end under President Nixon, when he decided to free the dollar from the gold standard. The price of gold skyrocketed, and went from a flat rate of $35 per ounce to $800 in 1980.

Today no currency in the world is backed by gold anymore. But countries still have gold reserves, kept in case they have to defend their currency. The amount of gold at Fort Knox is unknown, and is classified. (Although it is widely believed that the U.S. has more gold bullion than any other country.

The gold reserves of some countries are as follows: The U.S. is thought to have 8,133.5 tons of gold, followed by Germany with a reserve of 3,384.2 tons. Italy, France, Russia and China follow in sequence. Number 10 in the gold reserve top 20 is India, with Turkey coming in at number 11.

Of course, anyone spending any time in Turkey will not be surprised that there are serious reserves of gold in this country. Gold is incredibly important in Turkey. Every bride is given gold bracelets, gold necklaces, gold coins when she is married. New born babies have gold coins pinned to their clothing while they sleep. Dollars and euros can be given, but you can be sure there will be gold pinned on someone somewhere at any kind of celebration.

But the popularity of gold, the gold standard, the gold reserves, none of this explain where gold comes from. The alchemists tried to make gold, and failed. Gold is a natural element and cannot be replicated or renewed. Diamonds are compressed coal. Oil is the result of living things, not dinosaurs as we were mistaught at school- but tiny microscopic bacteria. But what about gold?

Last week NASA reported on an event which gives some indication where gold came from. In August, two stars slammed into each other in deep space. The explosion that ensued as an alchemical explosion, that is it created huge amounts of gold.

Two super-dense stars crashed into one another 130 million light years away. The resulting explosion included platinum and uranium, as well as gold. The explosion even distorted space time, being only the fifth time that scientists have been able to detect gravitational waves on Earth.

Astronomers observed the explosion and there was a flash of light, both in the visible and in the invisible light spectrum. When this was analyzed the scientists were amazed to discover that gold and other heavy elements had been produced on "a cosmic scale."

Dr. Joe Lyman from the University of Warwick is quoted as saying: "This tells us that the heavy elements, like the gold or platinum in jewelry, are the cinders forged in the billion degree remnants of a merging neutron star."