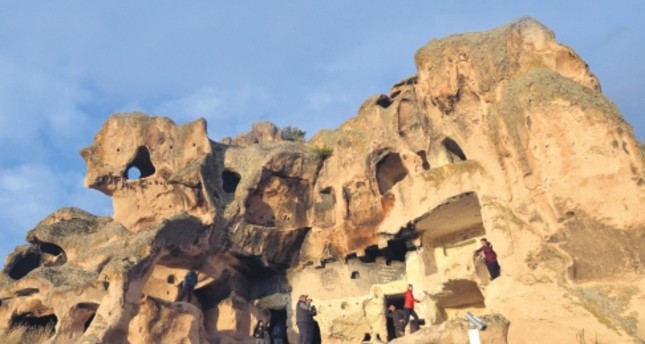 The rock formations and rock-cut Settlements of the Phrygian Valley are likened to the ones in Cappadocia, Nevşehir.

Anatolia is full of natural wonders, history and even the occasional myth or conspiracy, but only a few spots in the region can brag that they have it all. Welcome to the Phrygian Valley where the ancients turned nature into homes

Following the footsteps of the ancients is not an easy task in the modern age. However, Anatolia, the home of numerous civilizations throughout history, offers adventurers a chance to peek into the cultures and lifestyles of its previous inhabitants. Located in the Anatolia region, the Phrygian Valley is one of the few places where visitors can gain insight into the kingdom of Phrygia.

History of the valley

Phrygians are believed to have settled in western Anatolia in around the eighth century B.C. Following the fall of the Hittites, the Phrygians and their kingdom, once based in modern-day Ankara, became a dominant power in Anatolia.

Most people associate the Phrygians with the Trojan War where they fought side by side with the Trojans, as recorded in Homer's "Iliad," and by their legendary King Midas, who is also a popular figure in Greek mythology and known as the king with the "golden touch."

The Phrygian Valley, which spreads across three Turkish provinces, Eskişehir, Kütahya and Afyon, offers visitors the chance to follow the footsteps of this ancient kingdom and their mighty empire.

Rumors of an alien civilization

The region has also been the focus of conspiracy theorists. Some believe that the valley's cart tracks, which are deeper than any other ancient road, were made by aliens.

Since scientists have not been able to determine the exact age of the tracks, some strongly advocate the theory that the tracks are the remnants of an ancient alien civilization. Though it might sound a little off to you, there is no doubt that these theories have lured hundreds of visitors and scientists to the region.

So, if you are lucky enough, you might even discover the remains of an ancient alien civilization during your visit.

For those who would like to keep their feet on the ground, the Phrygian Valley offers many wonders. Despite being a popular cultural and natural destination, it stands out with its untouched nature.

Moreover, since the area is relatively tourist free, the valley is fun to explore and it provides a unique opportunity to "bond" with the ancients.

Adorned with Phrygian relics, rock-cut tombs and sculptures, the valley is perfect for photography. History and nature enthusiasts, who want to take their time photographing the region, can do so at their leisure.

As you walk down the valley, you might notice the resemblance between its rock formations and Cappadocia's fairy chimneys.

Two of the most important Phrygian monuments are the rock tombs "Aslantaş" (Lion Stone) and "Yılantaş" (Snake Stone), located close to the city center of Afyon.

Discovered by Scottish explorer William Mitchell Ramsay in the late 19th century, Aslantaş was named after the two lion figures standing next to the entrance. Yılantaş, on the other hand, sits a few meters from Aslantaş and is named after the statue of a lion holding a snake in its claws.

The Midas Monument, also known as Yazılıkaya (Inscribed Rock), is the real jewel of the valley. Considered the Phrygians' masterpiece, the monument is covered with miscellaneous geometric designs and hieroglyphics. Archaeologists believe that the Phrygians held religious ceremonies at this site.

Along with the ancient settlements dating back to the Phrygians, Greeks and Romans, the valley is also home to the remains of the first Christians and the Byzantines. As you explore, small chapels and monastery complexes welcome you as well as numerous rock-cut settlements from the Byzantine era.

The best way to see all of the ancient sites and most of the valley is to follow the Phrygian Way, one of the longest trekking routes in Turkey, stretching 506 kilometers (314 miles) over three provinces.

Designed to facilitate a genuine Phrygian experience, the route starts at Gordium, the Phrygian capital, then follows the valley of the Porsuk River, passing through Sivrihisar and arriving at Pessinous, another important Phrygian settlement.

Although the route has three starting points, all routes meet at Yazılıkaya, the most important landmark of the civilization.

Once you reach the junction, the trail forks: The first trail leads to Fındıklı Village, passing through the Asmainler, Zahran, and İnli Valleys, former Phrygian settlements, and ends at Yenice, between the provinces of Eskişehir and Kütahya.

The second trail passes through Sarıcaova, a picturesque Circassian village, and Döğer, a town in Afyonkarahisar. The trail then takes trekkers through the town of Ayazini before coming to an end at Seydiler, on the highway between Afyonkarahisar and Ankara.

The valley is so vast that visitors are encouraged to spare at least three days so they can enjoy sights, while hiking or biking through the valley and camping along the way. The best time to visit the valley is toward the end of summer and early autumn, but keep in mind that it offers a picturesque landscape throughout the year.

Share on Facebook Share on Twitter
Previous in Feature Liberal principles prevailed in Ottoman economic life, but it was... Next in Feature Last Thursday, Kenya went to the polls, but whet is more significant...
DAILY SABAH RECOMMENDS