A call to the 'Big Three': African footballers aim for top Turkish clubs 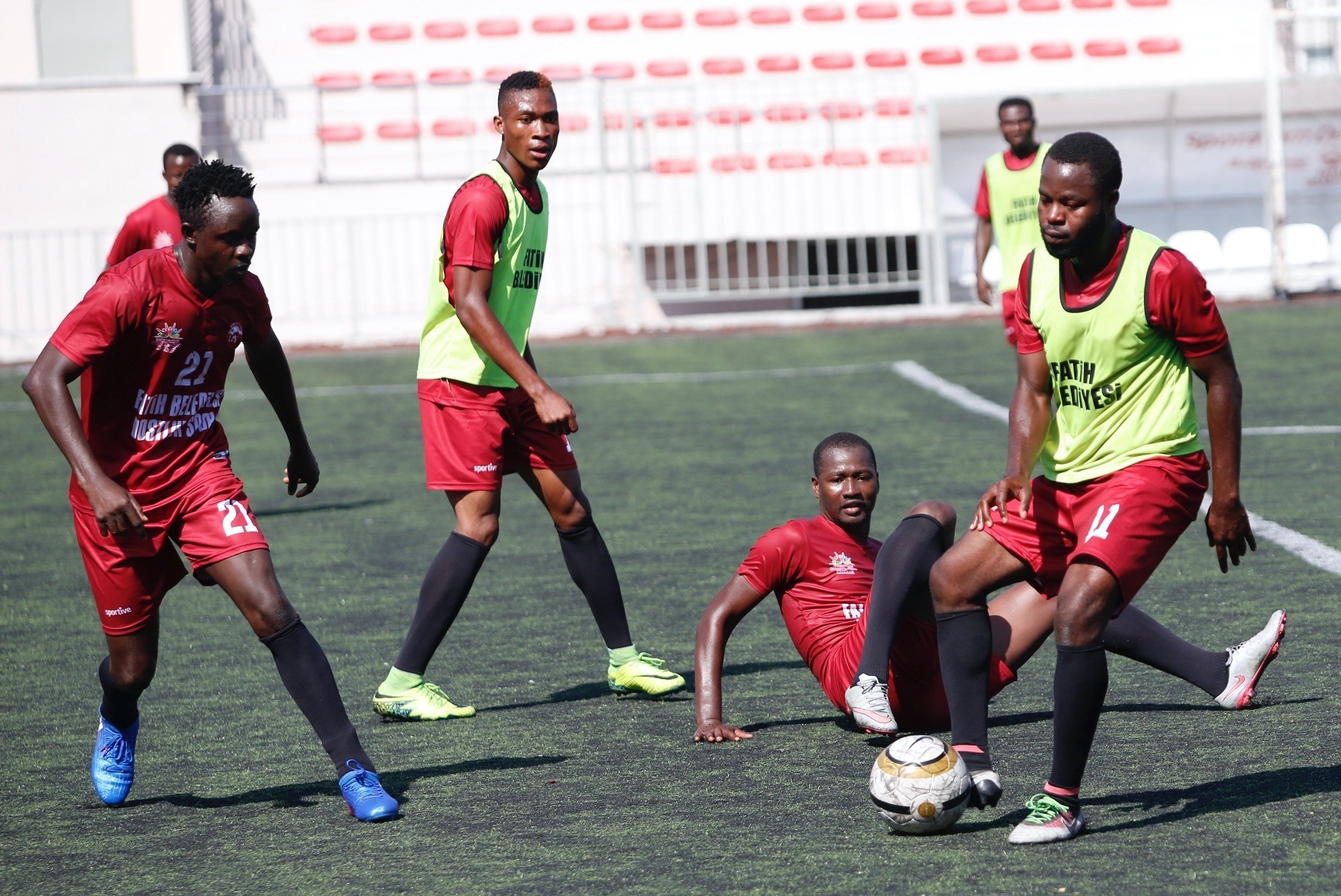 Tricked by human traffickers and brought to Turkey with dreams of playing for Turkeyu2019s top football clubs, these African footballers try to get their attention with a team they formed under the auspices of Fatih Municipality.
by Damla Kayayerli
Nov 13, 2017 12:00 am

Deceived by bogus managers with the dream of playing for Turkey's biggest football clubs, African footballers have formed a team of their own with the help from Istanbul's Fatih Municipality

Ahmed Konati, 20, has been playing football in Mali since he was a kid. The young African footballer turned professional and began playing in Mali's premier league at a very young age. Yet, with dreams of playing in the international arena, he was tricked by a phony manager who said, "I am going to take you to Istanbul and you will play for one of the 'Big Three' (Galatasaray, Fenerbahçe or Beşiktaş). You just need to come up with $4,000."

He gave up the money, almost all of his savings, without any hesitation. When he came to Istanbul, he was shocked that his so-called manager had disappeared.

Konati is not alone; many professional footballers like him have been deceived by fake managers in Africa. They have not given up however. Players from Cameroon, Nigeria, Zambia, Senegal, Sierra Leona, Congo, Ghana, Cote D'ivoire, New Guinea, Mali, Burkina Faso, Liberia, Republic of the Congo and Somali joined forces to pay for a field to train on. The determined athletes had to take on many jobs from cargo to the hawker's trade and struggled to afford renting a pitch.

Fatih Municipality Mayor Mustafa Demir, who was informed about the situation and decided to take matters into his own hands. He allowed the African football players to use all of the municipality's facilities.

The mayor went a step further, founding the Fatih Municipality African Friendship Sport Football Club and allowed them to use Fatih Mimar Sinan Stadium on weekdays.

The club, which was initiated as part of a social responsibility project, now has 16 African professional football players. It is the only amateur sports club in Turkey that consists of only African players.

The Fatih Municipality started to organize an annual African Cup Football Tournament, and around 1,800 African aspiring footballers living in Istanbul participate every June.

The organization promotes the players for football managers and helps them get transferred to Turkish teams. The team's coach and some of the young athletes training at Mimar Sinan Stadium talked about their dreams of playing for the "Big Three."

Victor Unuese, 28, the club's trainer, used to play in the premiere league in Nigeria before being tricked into coming to Istanbul. Upon his arrival, he said he applied to various clubs in Turkey but none of them even called back.

"The African football players here are like members of the same family. We take care of a problem that any of us have. Our dream is to play in the Super League," he said, adding that his personal dream is to train the "Big Three."

Another young Libyan football player, Yusuf Yusuf, 18, said, "I was totally demoralized when I realized that I was deceived. I hope that one day I will play in the Super League and be a top goal scorer."

South African Frank Akati, 18, said, "Football is a passion for me. There are many skillful players on the team. We are inviting trainers and scouts to come see our matches. Come and see our performance. I am calling on all the teams in the Super League. We can also organize practice matches. They should look at us instead of transferring players from foreign countries."

Foreign trade student at Istanbul Aydın University, Nigerian Cebrail Yakup, 18, was one of the very first players on the club.

Yakup said 84 of his friends have been signed so far. He mentioned his friend Süleyman, who was recently transferred to Iğrdırspor, which plays in the Regional Amateur League.

"They proposed TL 50,000 ($12,900) to him at first; however, Süleyman didn't accept the offer and demanded TL 110,000. Iğdırspor accepted his price. Players like us are generally transferred to the Regional Amateur League; however foreign players are banned from taking part in the second the third leagues. We are all really skillful and demand a chance from Fenerbahçe, Galatasaray and Beşiktaş," he said.

"Most African football players give all their money to human traffickers to be able to play for the 'Big Three' and come to Istanbul," said Fatih Mayor Mustafa Demir. "By founding the Fatih Municipality African Friendship Sport Football Club, we support these players as much as we can. Upon seeing that the number is great, we started to organize the African Football Cup to promote them."

The municipality has been organizing tournaments for the African footballers in Turkey for the last five years. Each tournament features 36 matches, and a total of 1,800 African football players have participated in the tournament.

Mayor Demir said that the tournament is a chance for these footballers to find themselves a professional team.

"Eighty-four of these footballers have been signe to various teams thanks to the tournament. French Premier League team, Nantes, and Spor Toto Super League team, Osmanlıspor, are among the most prominent of them. There are also transfers made to the various clubs in Anatolia. This social responsibility project was awarded a prize in the 'Social Projects Conducted by Our Municipalities' by the Justice and Development Party (AK Party) Directorate of Local Authorities," the mayor said.

"A photograph taken during their meeting with President Recep Tayyip Erdoğan has become really popular. The world and African countries heard about African footballers in Turkey with the picture. African countries see that their players are looked after by Turkey and supported by the Turkish president. We will also support them in the future," he said.