Will ideological discussions come to an end with impressive project for new AKM? 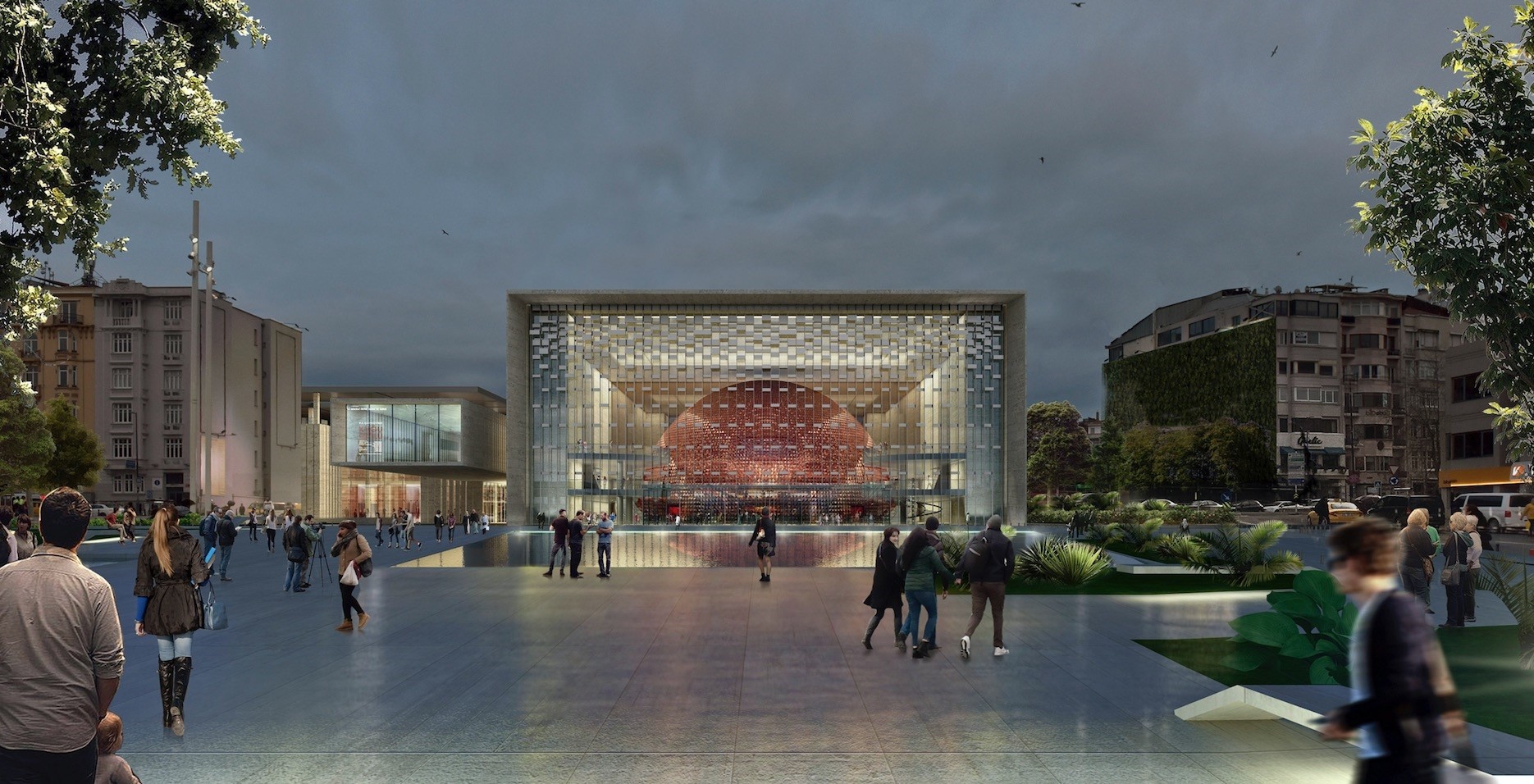 The introduction of a new opera building that will be built in place of the old Atatürk Cultural Center (AKM) has caused a stir among the public, and while many are excited to have a new opera house that will serve artists and the public, some people are still focus on the ideology behind the building, hampering the progression of the project

One of the amazing opera voices in Turkey, Hakan Aysev, is looking forward to the launch of the new opera house to replace the Atatürk Cultural Center (AKM) with great expectations, and finally he will able to achieve his long-awaited dream to perform at a stage such as glorious the New York Metropolitan Opera. You could see the excitement in his eyes when he was talking about the new opera house. It was a bleeding wound for him not having a magnificent opera house in his own country as an opera singer who has performed numerous leading roles in internationally known opera houses such as the Bolshoi, Bastille and Volksoper. In his remarks broadcasted on Haber 7 he said: "After I learned the details of the new AKM project, I was so relieved. Why on earth do we not have an internationally known opera house in a city like Istanbul, one of the cultural capitals of the world?" 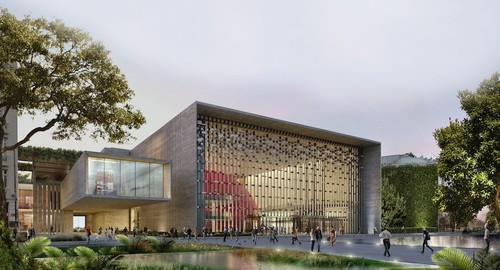 The hotly anticipated project will be an enormous transformation for the AKM, which is in poor physical condition with a rather gloomy façade at the heart of Taksim Square. I am deeply amazed to learn from Rainer Hermann, who is one of the leading German cultural elites specialized on Turkey, that when it rained, water dripped through holes in the roof and during some performances and cats were chasing mice on the stage at such a symbolic culture center. According to Hermann, even though the AKM provided access for Turkish people to operas of Europe, the physical features of the building were rather poor. However, various problems in the AKM do not only consist of weak infrastructure, but also its sad-colored exterior design that is not sympathetic to ordinary citizens.

Dr. Serdar Asut, an academic architect at Yaşar University, raised social legitimacy issues regarding representation patterns of the building in the eyes of the people. In remarks quoted from a speech in the 39th Annual Conference of the Environmental Design Research held in 2008, he said: "The AKM building stands like an alien right in the heart of the country. It looks cold and doesn't regard the contrast and heterogeneity of the society."

Finally, the story of a building that is located in the most important square of both Istanbul and Turkey and simply regarded as one of the most salient works of modern architecture of the Republic of Turkey can be rewritten today. The very remarkable story of the AKM building started in the 1930s. Lots of economic hurdles, administrative problems and a big fire having affected the building are the highlights of that history. Following a long break in its rather painful and much-debated history, President Recep Tayyip Erdoğan announced a long-awaited construction plan for the AKM in the official launch of the project on Nov. 6. The new project is expected to be finalized in the first quarter of 2019, and the AKM will be rebuilt on a larger plot as an opera house that also includes a theater, concert halls, an exhibition center, a convention hall and a cinema as well as other facilities such as a library, museum, art gallery and commercial space. 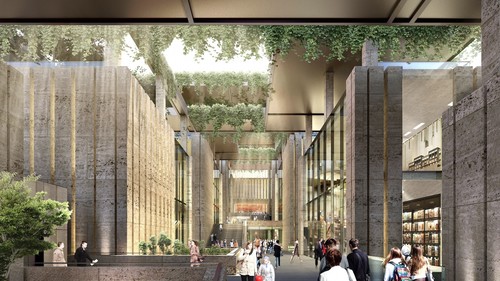 To be clear, some significant questions should be answered to have solid grasp of the AKM project. Initially, amid obvious disadvantages in terms of its insufficient physical capacity and technical facilities, why has the project been suspended for such a long time? More significantly, while most of the cultural elites took a stand against the new AKM project at the very beginning just because they took dictatorship on faith in a rather prejudiced way that Erdoğan appealed to, why do they seem to be relieved immediately after the official launch of the project? Obviously, Erdoğan is not imposing the new AKM on anybody because the project has told its own story. To put it more explicitly, it is quite clear that cultural elites do really feel satisfied with the new opera house.

Not surprisingly, one of the most prominent problems that dragged the project into deadlock earlier was the huge resistance from civil society organizations and political elites from opposition parties. They simply focused on the ideological meaning of the AKM. At this point, heated discussions have come to the fore and debates between the Justice and Development Party (AK Party) and main opposition Republican People's Party (CHP) made the matter a new kind of problem more than architectural design. For this reason, those involved in the debate are not only architects, but also politicians, academics, economists, artists and newspaper columnists. Public figures who are harshly opposed to the construction of a new building accuse pro-government public figures and cultural elites of moving from justified legal action to a self-serving purge in order to frame and reshape the heart of Taksim Square in tune with their nationalist projects. Commenting on repercussions of new opera house, Professor Deniz Ülke Arıboğan, a well-known academic in the Political Sciences Department of Istanbul University, emphasized that "the project of new AKM building is magnificent in terms of architectural design, and therefore, it suits Mustafa Kemal's dignity and his memory embedded in the Republic of Turkey."

It was neither a shock nor a surprising decision to close down the AKM in 2008, following the early attempt to overhaul the building that was met with huge resistance from civil society organizations. What is really shocking about the building is all the debates revolving around the future of the AKM based on an ideological rhetoric rather than contemporary requirements and architectural approaches. Opponents of the project were so obsessed with the idea of Erdoğan's dictatorship that they were unable to see any vital necessities in the AKM project. Imagine that as the days and weeks passed without any work being done that led the AKM to fall into further decline for such a long time just because behind the need for renovation was malicious motives to root up the legacy of the Republic. Erdoğan expressed his regret over delays and gave rational reasons to make a decision to build a new opera house rather than restoring the current AKM. Erdoğan also touched on the insufficient physical conditions of the building, adding that "scientific data shows that the current building cannot be sustained and that it is not earthquake-proof." 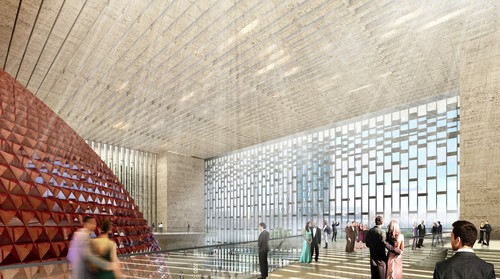 Moreover, Erdoğan underlined that Murat Tabanlıoğlu will build the new opera house. He is the son of the most prominent and influential figure of contemporary Turkish architecture. Hayati Tabanlıoğlu, who designed the AKM, started working on the project in 1956. Arıboğan gave some comments on this symbolically meaningful detail and added: "It is very exciting to learn that the new project was designed by Murat Tabanlıoğlu. Even though I do not admire the AKM for aesthetic reasons, I am glad to hear that the old soul of the building will be there. It was a rather prudent decision. I am pretty sure that he will look after his father's soul."

The new AKM project is receiving huge support also from internationally known tourism figures such as Dr. Cem Kınay, who is the founder of the Vienna-based Gulet Touristic and Magic Life Hotels Chains. Speaking to Daily Sabah on the issue, he said: "Operas have become the icons of cities and countries and they are the symbols all citizens are proud of. There is love, sorrow and joy in opera houses. Therefore, transformation of the AKM is highly significant in terms of both Istanbul and Turkey. The new AKM project will pump energy through Istanbul and Taksim and we should lay a brick in order to see the light of the fascinating opera building with our positive energy." He ended with a catchy call: "Let's make the new opera house one of the most remarkable icons to be shared via Instagram and other social platforms throughout the world." It seems that previous tensions were purely based on superfluous biases of cultural elites who stick to the idea of Erdoğan's dictatorial pressure. They now are being diminished swiftly since the project launch clearly showed that the new AKM building will neither be a border between classes nor a gift for any specific political party, but more of a heterogeneous public sphere for citizens.